Recently, I have been taking some on-line courses through the School of Biblical Apologetics with the Institute for Creation Research. Some of the lessons have been about how the Lord used parables to teach many lessons. Jesses seemed to use some of them like object lessons, where you use something currently in sight. So, here is my attempt to use a parable with birds as the object.

When you observe a bird’s nest with eggs in it and they all look alike, do you assume they are all from the same bird parents? In the picture above, it is obvious that there is a “false member of the family” in the nests.

Sometimes, they really do look the same, but there is a “Brood parasite” in among them. They look so similar that you hardly notice them. Therefore the parents accept them, sit on them, and all is well for a while. 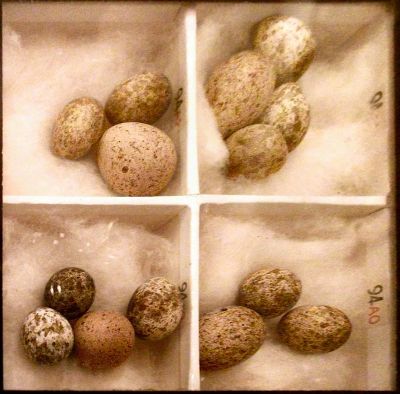 Reed Warbler eggs with Cuckoo Egg in them ©WikiC

But, when the eggs begin to hatch, several things can happen:

Sometimes, while the chick is in the egg, it hears its adopted parents and will actually make sounds like these parents. Therefore the parents feed them, just like its own.

Sometimes, they are so determined, that they actually shove the hosts eggs or the nestlings out of the nest.

Click to see photo of chick pushing egg out of nest.

When they do begin to grow, they become much larger than the adopted parents.

Common Cuckoo (Cuculus canorus) being raised by a Reed Warbler©WikiC

Now for an application:

“But there were also false prophets among the people, even as there will be false teachers among you, who will secretly bring in destructive heresies, even denying the Lord who bought them, and bring on themselves swift destruction. And many will follow their destructive ways, because of whom the way of truth will be blasphemed.” (2 Peter 2:1-2 NKJV) (emphasis mine)

Some deny the Creation and the Creator of Genesis. Yet, they “accept” the other parts of the Bible. Many other truths of God’s Word are also changed or watered-down to fit the needs of the false teachers.

Those of us who are Christians, should be on our guard for false believers, who may learn to “talk the talk” and may “sound like us,” but they are actually bending or perverting the truth.

“These were more fair-minded than those in Thessalonica, in that they received the word with all readiness, and searched the Scriptures daily to find out whether these things were so. ” (Acts 17:11 NKJV)

“These six things the LORD hates, Yes, seven are an abomination to Him: A proud look, A lying tongue, Hands that shed innocent blood, A heart that devises wicked plans, Feet that are swift in running to evil, A false witness who speaks lies, And one who sows discord among brethren.…” (Proverbs 6:16-19 NKJV)

“Because narrow is the gate and difficult is the way which leads to life, and there are few who find it. “Beware of false prophets, who come to you in sheep’s clothing, but inwardly they are ravenous wolves.” (Matthew 7:14-15 NKJV)

“For false christs and false prophets will rise and show signs and wonders to deceive, if possible, even the elect.” (Mark 13:22 NKJV)

Let God’s Word speak for itself. The answers are in the Word of God, if one just searches for these truths.

“The fear of the LORD is the beginning of knowledge, But fools despise wisdom and instruction.” (Proverbs 1:7 NKJV)

“Cease listening to instruction, my son, And you will stray from the words of knowledge.” (Proverbs 19:27 NKJV)

(Bolding for emphasis on verses is mine)

Is There a God?

4 thoughts on “Birds of the Bible – Parable of the Nest”