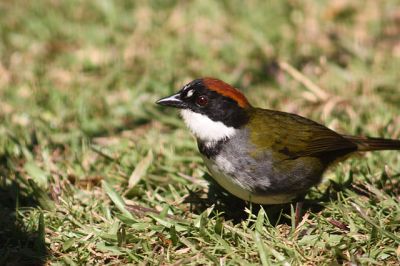 Yea, the sparrow hath found an house, and the swallow a nest for herself, where she may lay her young, even thine altars, O LORD of hosts, my King, and my God. (Psalms 84:3 KJV)

Sunday is here again, and it’s time to continue with the Emberizidae Family of Buntings, New World Sparrows and their allies.  First, aren’t we thankful that the Lord has created the world and set up a seven day week. He set the pattern for us to rest after six days of work. He was tired, nor has he stopped working, He was just setting an example, because the human body needs rest. He ought to know, He created us.

I for one look forward to Sundays. We rest and attend church, eat and fellowship with our friends, and attend the evening service and rest some more. These Sunday Inspirations, which have been going on for some time now, take several hours to put together, and then are scheduled for 1 or 2 minutes after midnight Sunday morning. When WordPress puts them up, I will already be resting in bed and enjoying the start of my Day of Rest. Enough of the personal information, let’s see what these birds are up to this week.

The first Sunday, we showed the Buntings in this family, last week, we showed most of the New World Sparrows in this Emberizidae family, so, let’s see who these “allies” are.

Towhees typically have longer tails than other emberizids. Most species tend to avoid humans, so they are not well known, though the eastern towhee P. erythrophthalmus is bolder. This species, and some others, may be seen in urban parks and gardens. Also, in with the Melozone genus are four Ground Sparrows.

Arremon is a genus of neotropical birds in the Emberizidae family. With the exception of the green-striped brush finch, which is endemic to Mexico, all species are found in South America, with a few reaching Central America.

“Where there is no vision, the people perish: but he that keepeth the law, happy is he.” (Proverbs 29:18 KJV)