The Phasianidae Family has 183 species and is the last family in the Galliformes Order. This will take several Sunday Inspirations to cover all of these interesting birds. In Scripture, they are considered “clean fowl” and may be eaten. Here in America, many Wild Turkeys have found themselves the center of attraction on Thanksgiving Day.

Part I begins with the first twenty one (21) members of the Phasianidae clan in ten (10) genera. There are 2 Turkeys, 12 Grouse, 2 Capercaillies, 2 Prairie Chickens and 3 Ptarmigans.

The Phasianidae are a family of heavy, ground-living birds which includes pheasants, partridges, junglefowl, chickens, Old World quail, and peafowl. The family includes many of the most popular gamebirds. The family is a large one, and is occasionally broken up into two subfamilies, the Phasianinae, and the Perdicinae. Sometimes, additional families and birds are treated as part of this family. For example, the American Ornithologists’ Union includes Tetraonidae (grouse), Numididae (guineafowl), and Meleagrididae (turkeys) as subfamilies in Phasianidae.

The first genus, Meleagris, has the Wild Turkey and the Ocellated Turkey. The Ocellated Turkey (Meleagris ocellata) is a species of turkey residing primarily in the Yucatán Peninsula. A relative of the Wild Turkey (Meleagris gallopavo), it was sometimes previously treated in a genus of its own (Agriocharis), but the differences between the two turkeys are currently considered too small to justify generic segregation. They relatively large birds.

The Ruffed Grouse (Bonasa umbellus) is a medium-sized grouse occurring in forests from the Appalachian Mountains across Canada to Alaska. It is non-migratory. It is the only species in the genus Bonasa. The ruffed grouse is sometimes incorrectly referred to as a “partridge”, and is a bird of open areas rather than woodlands. The ruffed grouse is the state bird of Pennsylvania, United States.

Tetrastes is a genus of birds in the grouse subfamily. It contains the following species: Hazel grouse (Tetrastes bonasia) and Chinese grouse(Tetrastes sewerzowi). Both species live in forests with at least some conifers in cool regions of the Northern Hemisphere.

Falcipennis is a genus of birds in the grouse family that comprises two very similar species: Siberian grouse (Falcipennis falcipennis) and Spruce grouse (Falcipennis canadensis)
Both inhabit northern coniferous forests and live on conifer needles during the winter. Both have breeding systems with dispersed male territories, intermediate between the leks of some grouse and the monogamy of others. 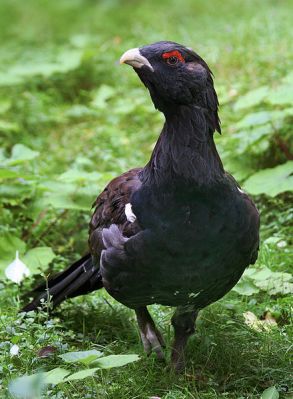 The Western Capercaillie (Tetrao urogallus), also known as the wood grouse, heather cock, or just capercaillie /ˌkæpərˈkeɪli/, is the largest member of the grouse family. The species shows extreme sexual dimorphism, with the male twice the size of the female. Found across Eurasia, this ground-living forest bird is renowned for its mating display.  The Black-billed Capercaillie (Tetrao urogalloides), which is just a bit smaller, is a sedentary species which breeds in the Larch taiga forests of eastern Russia as well as parts of northern Mongolia and China.

The sage-grouse are the two species in the bird genus Centrocercus, the Sage and the Gunnison, (which is about a third smaller in size, with much thicker plumes behind the head; it also has a less elaborate courtship dance.) They are the largest grouse from temperate North America. The Sage Grouse, adult male has a yellow patch over each eye, is grayish on top with a white breast, and has a dark brown throat and a black belly; two yellowish sacs on the neck are inflated during courtship display. The adult female is mottled gray-brown with a light brown throat and dark belly. Gunnison Grouse adults have a long, pointed tail and legs with feathers to the toes. Each spring, the both species of males congregate on leks and perform a “strutting display”. Groups of females observe these displays and select the most attractive males with which to mate. 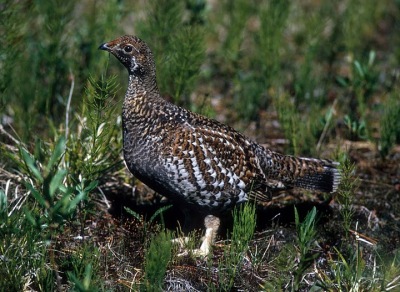 The genus Dendragapus contains two closely related species of grouse that have often been treated as a single variable taxon (blue grouse). The two species are the dusky grouse (Dendragapus obscurus) and the sooty grouse (Dendragapus fuliginosus). In addition, the spruce grouse and Siberian grouse have been considered part of this genus

Tympanuchus is a small genus of birds in the grouse family. They are commonly referred to as prairie chickens. The genus contains three species: Sharp-tailed grous, Greater prairie-chicken, and Lesser prairie-chicken. All three are among the smaller grouse, from 40 to 43 cm (16 to 17 in) in length. They are found in North America in different types of prairies. In courtship display on leks, males make hooting sounds and dance with the head extended straight forward, the tail up, and colorful neck sacks inflated.

Lagopus is a small genus of birds in the grouse subfamily, commonly known as ptarmigans. The genus contains three living species with numerous described subspecies, all living in tundra or cold upland areas. The three species are all sedentary specialists of cold regions. Willow ptarmigan is a circumpolar boreal forest species, white-tailed ptarmigan is a North American alpine bird, and rock ptarmigan breeds in both Arctic and mountain habitats across Eurasia and North America. All, with the exception of the red grouse, have a white winter plumage that helps them blend into the snowy background. Even their remiges are white, while these feathers are black in almost all birds. The Lagopus grouse apparently found it easier to escape predators by not being seen than by flying away.

“Let the heaven and earth praise him, the seas, and every thing that moveth therein.” (Psalms 69:34 KJV)