Clay
(1): (n.) A soft earth, which is plastic, or may be molded with the hands, consisting of hydrous silicate of aluminium. It is the result of the wearing down and decomposition, in part, of rocks containing aluminous minerals, as granite. Lime, magnesia, oxide of iron, and other ingredients, are often present as impurities.
(2): (n.) Earth in general, as representing the elementary particles of the human body; hence, the human body as formed from such particles.
(4): (v. t.) To clarify by filtering through clay, as sugar. [edited]

“Then I went down to the potter’s house, and, behold, he wrought a work on the wheels. And the vessel that he made of clay was marred in the hand of the potter: so he made it again another vessel, as seemed good to the potter to make it.” (Jeremiah 18:3-4 KJV) 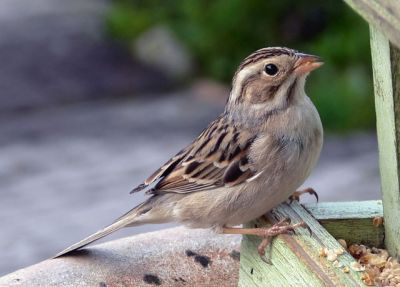 Adults have light brown upperparts and pale underparts, with darker streaks on the back. They have a pale crown stripe on a dark brown crown, a white line over the eyes, a dark line through the eyes, a light brown cheek patch and brown wings with wing bars. The short bill is pale with a dark tip and the back of the neck is grey; they have a long tail. Non-breeding adults and immature resemble chipping sparrows and Brewer’s sparrows; they often form flocks with these birds outside the nesting season.

The male sings from an open perch to indicate his ownership of the nesting territory. The song is a Bzzzz bzzzz za za.

Clay-colored Thrush (Turdus grayi) is a common Middle American bird of the thrush family (Turdidae). It is the national bird of Costa Rica, where it is well-known as the yigüirro. Other common names include clay-colored robin.

It ranges from South Texas (where it is rapidly expanding its range) to northern Colombia; west and north of the Isthmus of Tehuantepec. It is limited to the Atlantic slope, except for a population around Oaxaca City, Mexico that probably originates from escaped cage birds.

In general appearance and habits it resembles other Turdus thrushes such as the American robin. It is about the same length or slightly smaller. The plumage is brownish, somewhat lighter below than above, lightest on the flanks. Birds from humid regions are darker than those from dry regions. The throat is faintly streaked. Immature birds have faint mottling on the back and underparts. The bill is greenish-yellow with a dark base, the legs are pinkish or flesh-colored, and the irises are reddish—all useful identification points.

The song, rather low-pitched and with a slow steady tempo, consists of many slurred musical phrases which are often repeated irregularly. The tock flight call is like the American robin’s but harsher.

“Thou wilt say then unto me, Why doth he yet find fault? For who hath resisted his will? Nay but, O man, who art thou that repliest against God? Shall the thing formed say to him that formed it, Why hast thou made me thus? Hath not the potter power over the clay, of the same lump to make one vessel unto honour, and another unto dishonour?” (Romans 9:19-21 KJV)

Birds whose first or last name start with “C”

*
[Definitions from Webster’s Dictionary of American English (1828), unless noted. Bird info from Wikipedia plus. Both With Editing]

2 thoughts on “Avian And Attributes – Clay (Molder or Potter)”