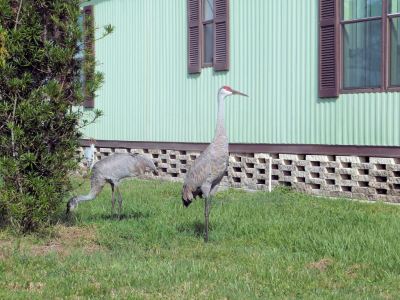 Sandhill Cranes in side yard – The Guard Sandhill watching

Dan and I have been re-reading “Things I Have Learned” by Dr. Bob Jones, Sr. One of his messages was about “Rabbit Chasers.” It has to do with a “Possum” dog getting sidetracked by a Rabbit. [More about that later.]

The day after reading that part, I was looking out our kitchen window and spotted the four Sandhill Cranes in our side yard. They come by frequently. It is a mom, dad, and two juveniles.

About that time a rabbit appeared close to the house next door. [He was in our front yard on Easter Morning when we back out on the way to church. Yeah! The Easter Bunny!, I told Dan.] The rabbit was minding his own business when the “guard” Sandhill took out after him. Now, I call that Sandhill a “rabbit chaser.”

This is not the first time we have watched a Sandhill take-off after an animal. Years, ago, we were watching several Sandhill Cranes walking through the travel-trailer park where we were staying. A small kitten, thought he would “take on” one of these tall birds. The Sandhill opened up his wings, making him look “really big” and took two steps toward the small cat. Haven’t seen a cat run that fast in a long time. :)

Back to the book and the “Rabbit Chasers.” To shorten the message, it was about what a good “Possum” dog does, compared to a “Rabbit Chaser.” A good dog will go over hill and dale, through water, etc. and never gets off of the trail until he either trees his opossum, or he loses it. On the other hand, a dog that starts on the scent of his prey, comes across the trail of a rabbit, and changes course to follow the rabbit, is a “Rabbit Chaser.”

This Dog Adopted His Opossum. Back to the drawing board.

Dr. Bob takes that story and tells the students in chapel, to finish what they started. [“Finish The Job” was another of his saying.] The student starts college and then they meet a girl or boy, they start wavering about finishing. There are other things to get us off-track also. [Sound familiar] He mentions other things, but basically, he was challenging the students to stay on course and finish what they started. A very good lesson for all of us. I had hoped to find an online version to share a link to, but it doesn’t seem to be available. The book is still available. Things I Have Learned at the school.

“The Son of God came all the way from heaven to this earth. I am speaking reverently. He got on the trail of His Father’s will. Everything tried to stop Him, but He stayed on the trail.” … “One day He hung on the cross in agony and blood. After awhile He cried, ‘It is finished.’ He stayed on the trail. He never got off. He said, ‘I came to do My Father’s will, and now it is done.’ He died for us. And my Bible says, ‘He shall see the travail of His soul, and shall be satisfied.’ ..”You will never be happy off the trail.” [From Things I Have Learned, p106.]

There is much more I would love to share about that message, but, I’ll leave you to read the book if you would like.

“But none of these things move me, neither count I my life dear unto myself, so that I might finish my course with joy, and the ministry, which I have received of the Lord Jesus, to testify the gospel of the grace of God.” (Acts 20:24 KJV)

Here are some of his many sayings that Dr Bob Jones Sr. shared with students [of which we both were at one time].