Scripture Alphabet of Animals: The Goat

There are two kinds of goat in the countries where the Bible was written; one very much like those that we sometimes see; the other differing from it in several respects, especially in the greater length of its ears. It is supposed that the prophet Amos speaks of the latter kind when he says,

As the shepherd taketh out of the mouth of the lion, two legs or a piece of an ear. 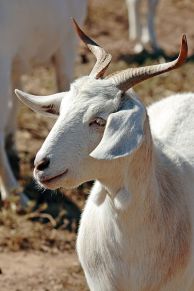 The ear of this kind of goat is so long that a large piece might easily be bitten off; it sometimes measures more than a foot.

Solomon says, in the Proverbs, when speaking to a man who is diligent in his work,

Thou shalt have goats’ milk enough for thy food, for the food of thy household, and for the maintenance of thy maidens.

This seems strange to us, because we are not much used to it; but in those countries the milk of the goat is very sweet and good, and is often made into cheese.

The people there often have a great number of goats. Jacob sent a present of two hundred and twenty to his brother Esau; and a great king, mentioned in the Bible, once received seven thousand seven hundred as a gift. A man is mentioned in the first book of Samuel who owned a thousand goats: perhaps you can find the place; and if you do, you will see in the next verse what his name was, and also the name of his wife. 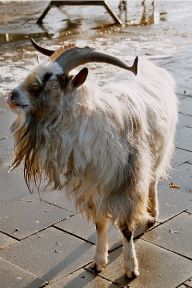 There are two kinds of hair upon the goat; one is long and coarse, the other soft and fine. Of the first kind the people make a kind of rough, coarse cloth; the other is made into very fine cloth, almost as soft as silk. A part of the curtains for the tabernacle were made of goats’ hair.

The bottles mentioned in the Bible were usually made of goat-skins: the people in those days had not learned to make glass. When they had been used a long time, they became worn, so that they would not hold what was put in them. Our Savior once said,

Neither do men put new wine into old bottles;

this was because the new wine would ferment and the leathern bottles would burst. There is a story in the Old Testament about some men who wished to deceive Joshua, and lead him to think that they lived at a very great distance from him, when they really lived very near. So it is said, (Josh. 9:4, 5)

They took old sacks upon their asses, and wine-bottles, old and rent, and bound up; and old shoes and clouted upon their feet, and old garments upon them; and all the bread of their provision was dry and mouldy 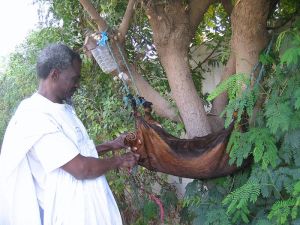 This our bread we took hot for our provision out of our houses on the day we came forth to go unto you; but now, behold it is dry, and it is mouldy. And these bottles of wine which we filled were new, and behold they be rent; and these our garments and our shoes are become old by reason of the very long journey.

The Israelites had a singular custom in ancient times, about which you may read in the sixteenth chapter of Leviticus. It was commanded by God, and was to be observed once in every year. On the morning of the day appointed for it, the high-priest was to wash in pure water, and clothe himself in a dress of clean white linen. Then two fair and handsome young goats were brought to him, one of which was to be killed. The priest was to cast lots, that he might know which of them it should be; then he was to kill him, sprinkle his blood upon the altar seven times, and burn the flesh. Afterwards he was to take the live goat, lay both hands upon his head, and confess over him the sins of the Israelites,

putting them upon the head of the goat.

Then the animal was given into the care of a man who led him away and let him go in the wilderness,

bearing upon him all the iniquities

of the people. This goat was a type of our Savior; that is, it represented what he afterwards did, when he came into the world and “bore our sins.”
___
See: