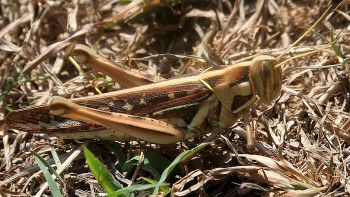 Scripture Alphabet of Animals: The Locust

The locust is called an insect, as well as the ant and the bee, but instead of being harmless, as they usually are, it does a great deal of injury. It is also much larger than they; for it is generally three inches long, and sometimes as much as four or five. The plague of the locusts was the eighth that God sent upon the Egyptians, because they would not let the children of Israel go, as he commanded; and it was a very terrible one indeed. The Bible says,

They covered the face of the whole earth, so that the land was darkened; and they did eat every herb of the land, and all the fruit of the trees which the hail had left; and there remained not any green thing in the trees, or in the herbs of the field through all the land of Egypt.

This is the way they often do in those countries, though perhaps it is not common for so many to come at once.

They fly in companies of thousands together, and so close that they look like a great black cloud. When they alight on the ground they all come down in a body, and immediately begin to devour the grass and grain; they also eat the leaves of the trees, and every green thing they can find. The people dread them more than they do the most terrible fire or storm; because though they are so small, they destroy all the food, and leave the people ready to starve. When the inhabitants see them coming over their fields, they try to drive them away by making loud noises or by kindling fires; but this does little good.

It is said that a great army of locusts came over the northern part of Africa about a hundred years before the birth of Christ. They consumed every blade of grass wherever they alighted; also the roots, and bark, and even the hard wood of the trees. After they had thus eaten up every thing, a strong wind arose, and after tossing them about awhile, it blew them over the sea, and great numbers of them were drowned. Then the waves threw them back upon the land, all along the sea-coast, and their dead bodies made the air so unwholesome that a frightful pestilence commenced, and great numbers of men and animals died.

Many travellers have seen these great clouds of locusts, and describe them in their books. One says that he saw a company consisting of so many that they were an hour in passing over the place where he was. They seemed to extend a mile in length and half a mile in width. When he first noticed them, they looked like a black cloud rising in the east; and when they came over head, they shut out the light of the sun, and made a noise with their wings like the rushing of a water-fall. Another swarm is mentioned which took four hours to pass over one spot; and they made the sky so dark that one person could not see another at twenty steps off.

You can now understand two or three passages from the Bible which I will mention. David says in the 23d verse of the 109th Psalm,

I am tossed up and down as the locust;

that is, as the clouds of locusts are tossed about by the wind. In the first chapters of Joel God threatens to send the locust among the people, because of their wickedness; and he says of them,

An English clergyman who visited countries where the locusts are found, a few years ago, says that these verses describe them exactly as he has himself seen them.

Locusts are sometimes used for food. The Arabs boil them with salt, and then add a little oil or butter; sometimes they toast them by the fire before eating them. A traveller speaks of seeing the Arab women employed in filling bags with locusts, which were to be used for food. You know it is said in the New Testament that John the Baptist

did eat locusts and wild honey,

but it is not quite certain that this insect was meant; perhaps it was the fruit of the locust-tree that he ate.