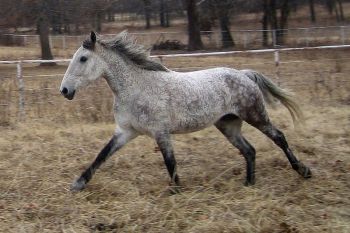 Scripture Alphabet of Animals: The Horse

There is a fine description of a war-horse in the book of Job-a book which some think to be the oldest in the world. It is in the thirty-ninth chapter.

Hast thou given the horse strength? Hast thou clothed his neck with thunder? Canst thou make him afraid as a grasshopper? The glory of his nostrils is terrible. He paweth in the valley, and rejoiceth in his strength; he goeth on to meet the armed men. He mocketh at fear, and is not affrighted; neither turneth he back from the sword. The quiver rattleth against him; the glittering spear and the shield. He swalloweth the ground with fierceness and rage: neither believeth he that it is the sound of the trumpet. He saith among the trumpets, Ha, ha; and he smelleth the battle afar off, the thunder of the captains and the shouting.

In the fifth chapter of Judges you will find this verse.

And it seems likely from this, that it was not the custom to shoe horses in those days, so that their hoofs were more easily broken.

They had horses in Egypt in very ancient times, as you will find if you read the first part of the book of Exodus. You will see there how the children of Israel escaped from Egypt, after they had been kept in hard bondage a great many years; and how when they had gone only a short distance, the wicked king Pharaoh went after them to try to get them back. There was a great company of the Israelites, men, women and children; they had nothing to ride on, and had their flocks and herds with them, so that they could not go very fast. They took the course which God directed, and it brought them to the Red Sea, where there were neither boats nor bridges for them to go over.

Just then they heard that Pharaoh and his army were coming after them. Some came in chariots of war, and of these there were six hundred drawn by horses; and a great many more came on horseback. Now what could these people do? If they went on, they would be drowned; and if they went back, or stayed where they were, they would fall into the hands of the Egyptians. God told them not to be afraid, for he would take care of them; so he divided the waters of the sea, and made a dry road for them to go through, while the water stood up like a wall on each side of them. Then the Egyptians followed on, and God let the waters flow down upon them, so that they were all drowned. Think what a sight it must have been, when the chariots, and horses, and men, were all surrounded by that great, mighty water, and then sunk down one after another, so that they could be seen no more. The children of Israel sang a psalm of praise after God had saved them in this wonderful manner, and these words are a part of it:

Sing ye to the Lord, for he hath triumphed gloriously; the horse and his rider hath he thrown into the sea.

In one of the last chapters in the Old Testament you will find these words,

In that day shall there be upon the bells of the horses, HOLINESS UNTO THE LORD.

This speaks of a time which has not yet come, but for which christians are looking, when this world will not be wicked as it now is; but when every thing, even the bells of the horses, shall be holy unto the Lord.

2 thoughts on “Scripture Alphabet of Animals: The Horse”