What Would God Say of Us? 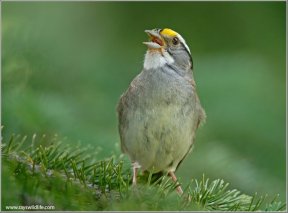 For,
they believe that
only those birds
which sing different songs,
are good at raising
and taking care of the family
and the territory…

He worshiped
and
sang for the LORD at all times…

Is that the reason why
GOD certifies David
as the one who pleases
HIS heart?

Would GOD say of us
like how HE said of David?
Most of us have complicated
Our lives.
Instead of singing,
when life turns
too complicated to handle..

If GOD chooses only those
Who sing for HIM at all times,
How many of us would
GOD select?

Yours in YESHUA,
A. J. Mithra at Crosstree

And God blessed them, saying, Be fruitful, and multiply, and fill the waters in the seas, and let fowl multiply in the earth. (Genesis 1:22)

The Weaver Bird from Creation Moments

Weaver bird name for the Ploceidae, a family of Old World seed-eating birds closely resembling finches (hence the alternate name weaver finch). It includes a number of so-called goldfinches and waxbill finches that are actually weaver birds, rather than true finches of the family Fringillidae. The weavers are named for the highly complex woven nests built by many species, though others build only crude nests, and the parasitic widow weavers build no nests at all. Most weavers are sedentary, noisy, gregarious, and polygynous, with elaborate courtship rituals. Most weavers use grasses for the weaving of the nests which have an entry at the bottom.

The weaver group is divided into the buffalo, sparrow, typical, and widow weavers.

Sparrow-weavers – Of the 35 sparrow weavers the best known, and in fact one of the most widely distributed and familiar small birds in the world, is the English sparrow native to Europe, W Asia, and N Africa. It is the most successful town and city dweller among birds, and has followed European civilization wherever it has gone; it was introduced to North America in 1852. As common in Asia is the Eurasian tree sparrow (also introduced in the United States), a nuisance in rice fields and sold in great quantities for food. These birds build untidy domed nests with side entrances. Most specialized of the sparrow weavers is the
White-browed Sparrow-weaver
Chestnet-crowned Sparrow-weaver
Chestnut-backed Sparrow-weaver
Donaldson-Smith’s Sparrow-weaver

Social-weaver of Africa, famous for its apartment-house nest, in which 100 to 300 pairs have separate flask-shaped chambers entered by tubes at the bottom. They build these structures, which may be 10 ft (3 m) high and 15 ft (4.5 m) across, high in a sturdy tree, beginning with a roof of straw thatch. Of the 100 or more African and Asian typical weavers, the small quelea, only 5 in. (12.7 cm) long, sometimes causes huge crop losses in Africa by feeding on grain in flocks numbering as many as one million birds.
Grey-headed Social-weaver
Black-capped Social-weaver

Widow-weavers – The African widow weavers (named for the long, drooping black tail plumes of the breeding male), or whydahs, are notable for their selective parasitic nesting habits; they lay their eggs in the nests of waxbills, and their eggs are white, as are those of the waxbill, rather than spotted, as are those of all other weavers.

Other Weaver Bird families are the:
Just plain Weavers, the Malimbe family, Quelea family, Fody family, and the Bishop family.

Check out the Weaver Bird Videos

We had another great day at the Space Coast Birding Festival which ends tomorrow, Jan 26th. We are home now, but they continue on without us.

Dawn, Jeff and Me

Met up with Dawn and Jeff several times again today. She does Dawn’s Bloggy Blog. Then off to some more workshops. First off was Reinier Munguia’s, “Bird ID for Kids” to help with some upcoming lessons with kids. Reinier was still not up to normal, so he let his daughter do the presentation. She is a 9th grader and did a  fantastic job. She has been in the field with her dad since she was 3 months old, straped on her father’s back.

In the afternoon it was “Taking the Fear Out of Identifying Gulls” by Alvaro Jaramillo of Field Guides, Inc. He did another great presentation and again I picked up some great information.

By the time that ended, I was in “information overload.” With all the workshops and seminars, birding, plus walking around the exhibits and chatting for the past few days, I was ready for “home.” So was Dan. When we did get home, a 90 mile drive, we found that the cold weather we have been having did “a number” on a few of the plants in the yard. Checked the outdoor temperature and it had gotten down to 26 degrees. We weren’t here to cover the plants. The ones in pots were okay because we had set them in the carport before leaving. Would I go again, You Bet!!!

Today was another interesting day at the Birding Festival. I started the day off with Reinier Munguia’s (of Wildstock Photos) seminar on the “Life of Birds.” He did a very good job even though he still isn’t feeling all that well yet. He made it entertaining as well as informative.

Hundreds of Coots at Merritt Is NWR

Then, I attended the two seminars by Sharon Stiteler of the BirdChick Blog. She did one on “City Bird, Country Bird Housing and Feeding,” which helped clear up some questions I had about using meal worms and some other feeding questions. Her other seminar was, “BirdChick Blog: The New Nature Journal.” She did an excellent presentation and I learned many things that will help me with this blog. She is a very enthusiastic person. Thanks, Sharon. It was nice meeting you.

I finished up the day with the “Great Florida Birding Trail“, by Mark Kiser.  He showed many of the great places around the state to bird and what birds to expect there. He also introduced their new birding trip planning website which will be a great help. Poor Dan, he is going to have to take us on some more birding trips. He has been learning all those photography tips, so I doubt he won’t mind too much.

A new thing is in the mail for me to use, but that information will just have to wait to be told later. Needless to say, this Birding Festival has been very well run and it has been right enjoyable. I have seen some mighty great pictures and learned more facinating facts about the great birds the Lord has created. His creative Hand is so evident.

Off we went again to the festival in 28 degree weather. Sure be glad when this cold front departs. Today’s seminars and workshops were very good. First, Dan and I attended “Bird Photography” by Joel Rosenthal, who gave a very good presentation on some ins and outs of photographing birds. Later, it was “Wading Birds” by Dr. Eric Stolen from Kennedy Space Center who studies the environment for the Wading Birds there on the Center.
Then I attended Alvaro Jaramillo’s “Field Marks We Haven’t Met Yet – Birding Outside the Box.” His idea of learning to ID birds is to observe and study them to where you just “know them”, like you would “just know” a person’s face. It was a very interesting lecture.
Then one of the highlights of the day was when I met up with Dawn, from Dawn’s Bloggy Blog. We enjoyed meeting each other and I hope to spend some more time chatting with her and Jeff. We were also concerned about Reinier Munguia, who was very sick yesterday and today. He does photography workshops here and is our friend who’s photos I use on the blog. He was a little better this afternoon.

So far, the Festival has been going very well, minus a small power outage this afternoon.

We are enjoying our time here at the Space Coast Birding and Wildlife Festival in Titusville, Florida. We left home yesterday (48 degrees) and drove the 90 miles and saw 23 species of birds on the way over including: 11 Wild Turkeys, American Kestrel, and 5 Robins. After arriving we spent 2 1/2 hours driving through the Black Point drive at Merritt Island National Wildlife Refuge. We were chilled to the bones with it still being only 48 degrees with 20-25 mph winds. But, it was worth it. Among the 36 species spotted were 5 new “life birds.”

Clappper Rail at Merritt Is. NWR

Snowy Egret at Merritt Is. NWR

We were fortunate to keep running into Peter, from Massachusetts, who was a big help with some of the IDs. He is here for the Birding Festival also. He had his telescope which was a big help.
Today, they really started the seminars, workshops, trips, and other activities. The festival runs until Sunday. This morning I attended an informative “Beginning Photography” seminar, by Milton Heiberg Photography, and then this afternoon, I went to a great workshop about “Kingfishers” by Jeffrey A. Gordon from Leica. Today I had the privilege of having conversations with Bill Thompson III (Bird Watcher’s Digest, editor) and Pete Dunn at Cape May Bird Observatory who has written many bird books and both are well known in the “birding world.”