Yesterday, we went over to the Lowry Park Zoo for a little while and were able to record several interesting birds and the Singing Dogs from Australia. I was especially pleased to hear the Bali Myna making a neat little call or song. Here is a video of it that I put together. This is another bird from the Lord’s Creative Hand.

God created the great sea monsters and every living creature that moves, which the waters brought forth abundantly, according to their kinds, and every winged bird according to its kind. And God saw that it was good (suitable, admirable) and He approved it. (Genesis 1:21 AMP)

These photos were taken at Palm Beach Zoo last month.

He was displaying and this is another view of him. 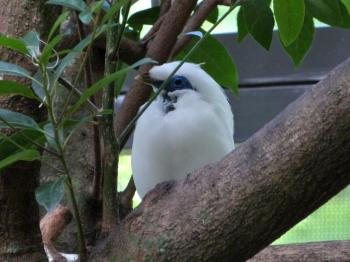 Here is a video of the Bali Myna at Palm Beach displaying:

The Bali Myna is a highly endangered species and many of the zoos are trying to preserve them through there breeding programs.

This bird is a member of the Sturnidae – Starlings Family. The Bali Myna (Leucopsar rothschildi), also known as Rothschild’s Mynah, Bali Starling, or Bali Mynah, locally known as Jalak Bali, is a medium-sized (up to 25 cm long), stocky myna, almost wholly white with a long, drooping crest, and black tips on the wings and tail. The bird has blue bare skin around the eyes, greyish legs and a yellow bill. Both sexes are similar.

The Bali Myna is restricted to the island of Bali in Indonesia, where it is the island’s only endemic vertebrate species. (An endemic subspecies, the Bali Tiger, has been extinct since 1937.) The bird was discovered in 1910, and in 1991 was designated the fauna symbol of Bali. Featured on the Indonesian 200 rupiah coin, its local name is “Jalak Bali”.

In its natural habitat it is inconspicuous, using tree tops for cover and–unlike other starlings–usually coming to the ground only to drink or to find nesting materials; this would seem to be an adaptation to its noticeability to predators when out in the open. The Bali mynah often gathers in groups when it is young to better locate food and watch out for predators. The vocalizations are a variety of sharp chattering calls and an emphatic twat.

During breeding season, males attract females by calling loudly and bobbing up and down. The birds nest in tree cavities, with the female laying and incubating two-three eggs. Both males and females bring food to the nests for chicks after hatching. (Wikipedia with editing)

Oh, I almost forgot to show you the Singing Dogs from Lowry Park Zoo. They were doing their thing causing all the others to make noise also. They are from New Guinea and music is playing in the background.

Received this as an email and thought you might enjoy a smile or a groan. (I’m still working behind the scenes on the Birds of the World. (Swallows at the moment.)

A merry heart makes a cheerful countenance, But by sorrow of the heart the spirit is broken. (Proverbs 15:13 NKJV)

And God said unto Noah, The end of all flesh is come before me; for the earth is filled with violence through them; and, behold, I will destroy them with the earth. Make thee an ark of gopher wood; rooms shalt thou make in the ark, and shalt pitch it within and without with pitch. (Genesis 6:13-14 KJV)

In the year 2005, the Lord came unto Noah, who was now living in the United States, and said, “Once again, the earth has become wicked and over-populated, and I see the end of all flesh before me. Build another Ark and save 2 of every living thing along with a few good humans.” He gave Noah the blueprints, saying, “You have 6 months to build the Ark before I will start the unending rain for 40 days and 40 nights.”

Six months later, the Lord looked down and saw Noah weeping in his yard, but no Ark. “Noah!” He roared, “I’m about to start the rain! Where is the Ark?”

“Forgive me, Lord,” begged Noah, “but things have changed. I needed a building permit. I’ve been arguing with the inspector about the need for a sprinkler system. My neighbors claim that I’ve violated the neighborhood zoning laws by building the Ark in my yard and exceeding the height limitations. We had to go to the Development Appeal Board for a decision. Then the Department of Transportation demanded a bond be posted for the future costs of moving power lines and other overhead obstructions, to clear the passage for the Ark’s move to the sea. I told them that the sea would be coming to us, but they would hear nothing of it. Getting the wood was another problem. There’s a ban on cutting local trees in order to save the spotted owl. I tried to convince the environmentalists that I needed the wood to save the owls – but no go! When I started gathering the animals, an animal rights group sued me. They insisted that I was confining wild animals against their will. They argued the accommodation was too restrictive, and it was cruel and inhumane to put so many animals in a confined space. Then the EPA ruled that I couldn’t build the Ark until they’d conducted an environmental impact study on your proposed flood. I’m still trying to resolve a complaint with the Human Rights Commission on how many minorities I’m supposed to hire for my building crew. Immigration and Naturalization is checking the green-card status of most of the people who want to work. The trades unions say I can’t use my sons. They insist I have to hire only Union workers with Ark-building experience. To make matters worse, the IRS seized all my assets, claiming I’m trying to leave the country illegally with endangered species. So, forgive me, Lord, but it would take at least 10 years for me to finish this Ark.”
Suddenly the skies cleared, the sun began to shine, and a rainbow stretched across the sky.

Noah looked up in wonder and asked, “You mean you’re not going to destroy the world?”