Many of the birds in the Bible are listed differently in some versions. The Ibises is only listed in this verse in the Brenton, DRB, and the ABP versions. Most of the different versions list Pelicans, Cormorants, Bitterns, Heron, and Storks. The Pelicans, Cormorants, Bitterns, and Heron are all found in thePELECANIFORMES Order of birds. The Storks are in the close CICONIIFORMES Order.

All of these birds enjoy similar surroundings and the Ibises and Spoonbills make up the Threskiornithidae Family.
The ibises (collective plural ibis; classical plurals ibides and ibes) are a group of long-legged wading birds, that inhabit wetlands, forests and plains. “Ibis” derives from the Latin and Ancient Greek word for this group of birds. It also occurs in the scientific name of the cattle egret, (Bubulcus ibis), mistakenly identified in 1757 as being the sacred ibis.

Ibises all have long, down-curved bills, and usually feed as a group, probing mud for food items, usually crustaceans. They are monogamous and highly territorial while nesting and feeding. Most nest in trees, often with spoonbills or herons. The word ibis comes from Latin ibis from Greek ἶβις ibis from Egyptian hb, hīb.

Birds of the Bible – Ibises

Ian’s Bird of the Week – Little Egret ~ by Ian Montgomery

I’ve recently been updating the Heron and Egret galleries (Ardeidae) on the website and I noticed that the elegant Little Egret hadn’t yet featured as bird of the week. Its one of five species of egret resident in Australia and in breeding plumage it is easily distinguished by the only one to have a pair of head plumes – as in the first photo – in addition to breast and back plumes. The only other egrets globally with these head plumes are the closely related Snowy Egret of the Americas and the possibly conspecific Western Reef Egret, neither of which has been recorded in mainland Australia (there are records of the Western Reef Egret in the Cocos Islands). 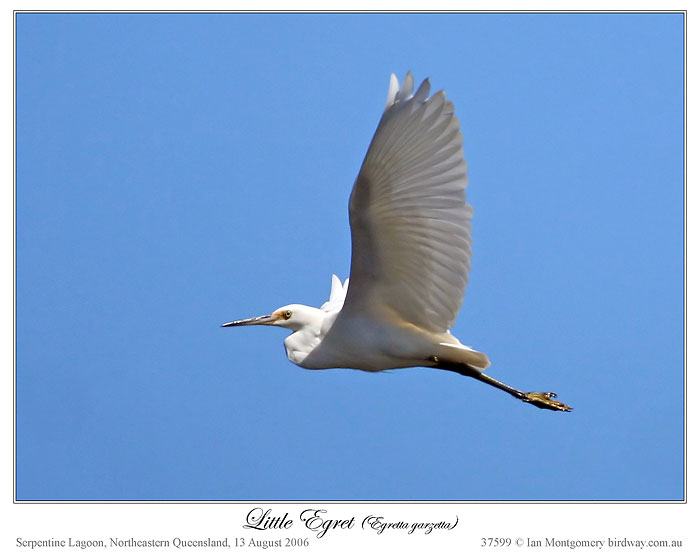 In non-breeding plumage, it lacks plumes and is most easily separated from the similarly-sized Intermediate Egret by having a dark bill rather than a yellow or orange one. It’s best and worst field mark is the yellowish feet – best because this feature is shared only with Snowy and Western Reef Egrets and worst because you usually can’t see the colour of the feet in their normal habitat – wetlands – though visible in flight as in the second photo.

Little Egrets are versatile feeders and often dash frantically around in shallow water, Greenshank-like, in search of small vertebrates. They also feed by stirring up prey with their feet and will also take fish, as in the third photo. This one has just grabbed a fish and is rushing off to avoid the attention of the nearby Royal Spoonbills. Egrets and Spoonbills often try to steal each others food. For examples, have a look at http://www.birdway.com.au/threskiornithidae/royal_spoonbill/source/royal_spoonbill_c35816f.htm (spoonbill chasing spoonbill) and http://www.birdway.com.au/threskiornithidae/royal_spoonbill/source/royal_spoonbill_c35824f.htm (great egret chasing spoonbill). 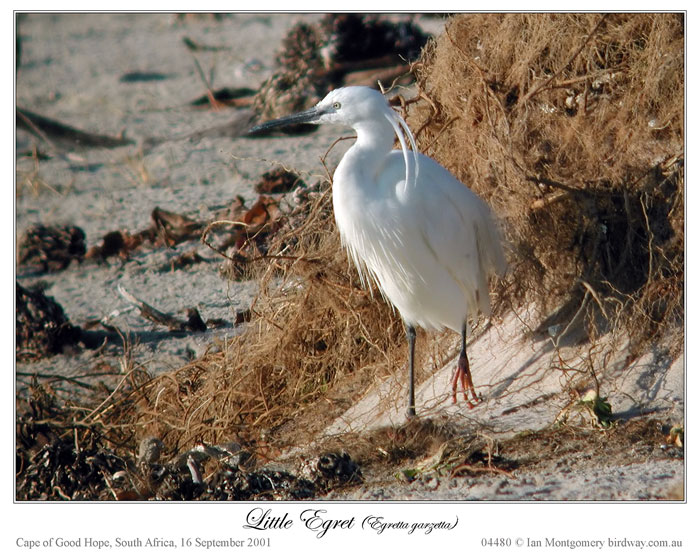 In Australia, the Little Egret is commonest in northern Australia, but also occurs in smaller numbers in eastern and southeastern Australia, in Tasmania in winter and in central and western Australia when conditions are suitable. It also extends widely through Eurasia and Africa. The Australian race has yellow lores between the bill and the eye, but that of the nominate Eurasian race normally has blue-grey lores as in the fourth photo of one on a beach at the Cape of Good Hope. Globally, Little Egrets are quite variable and their taxonomy is still poorly understood.

Like other egrets, the global population of Little Egrets suffered severely in the late 19th century because of the fashion trade in plumes. It was this trade in plumes that lead to the establishment of the RSPB in 1889, a silver lining if there was one, and populations have recovered since.
Links:
Herons and Egrets (Ardeidae)
Snowy Egret
Spoonbills and Ibises (Threskiornithidae)
Best wishes,
Ian
—
Ian Montgomery, Birdway Pty Ltd,
454 Forestry Road, Bluewater, Qld 4818
Phone: 0411 602 737 +61-411 602 737
Preferred Email: ian@birdway.com.au
Website: http://birdway.com.au

the stork, the heron after its kind, and the hoopoe and the bat. (Deuteronomy 14:18 NKJV)

The Egrets keep company with Heron and Bitterns in the Ardeidea Family of the large Pelecaniformes Order which includes the Pelicans, Ibises, Spoonbills, Hamerkop and Shoebill.

The Heron is one of the birds mentioned in the Bible, so is found in our Birds of the Bible – Heron page. 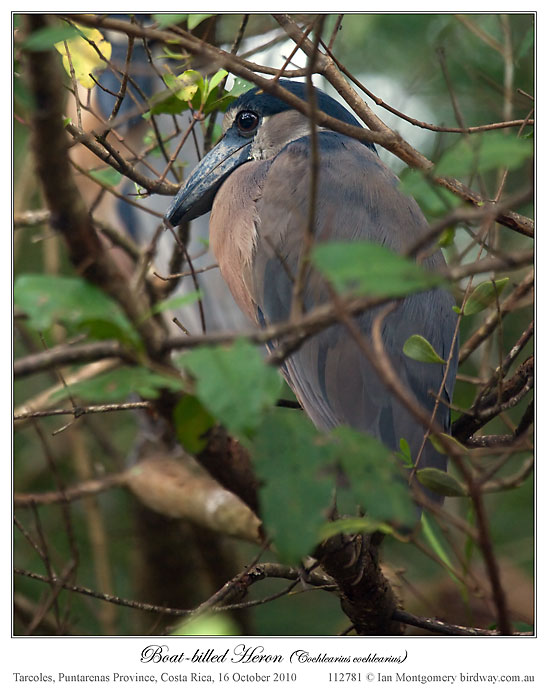 After I’d photographed the Resplendent Quetzal, my immediate reaction was one of relief: ‘Now I can just relax and enjoy the rest of my time in Costa Rica!’. Needless to say, that didn’t last long and I decided to chase a couple of other species on my bucket list including Scarlet Macaw and Boat-billed Heron. If you’re not familiar with bucket lists, have a look here http://www.imdb.com/title/tt0825232/ – and I hasten to add that I’m not terminally ill!. I enquired at the Hotel Savegre, where I was staying, and they booked me into the Villa Lapas, another eco-lodge-style hotel, but in the lowlands on Puntarenas Province on the Pacific Coast.

‘Lapas’ is the Spanish for Macaw, and that seemed like a good omen, particularly as the hotel is adjacent to the Carara Biological Reserve, supposedly one of the best places in Costa Rica for Scarlet Macaws. Anyway, I checked into the hotel and booked myself on an early morning wildlife boat trip on the Tarcoles River. I was the only passenger, so the crew of two were only too happy to try to satisfying my wishes. Sure enough, within minutes of starting, we got distant views of a pair of Scarlet Macaws feeding on Beach Almonds and after a trip up the river we went down to the mangroves for the climax of the trip, three Boat-billed Herons roosting in the mangroves. 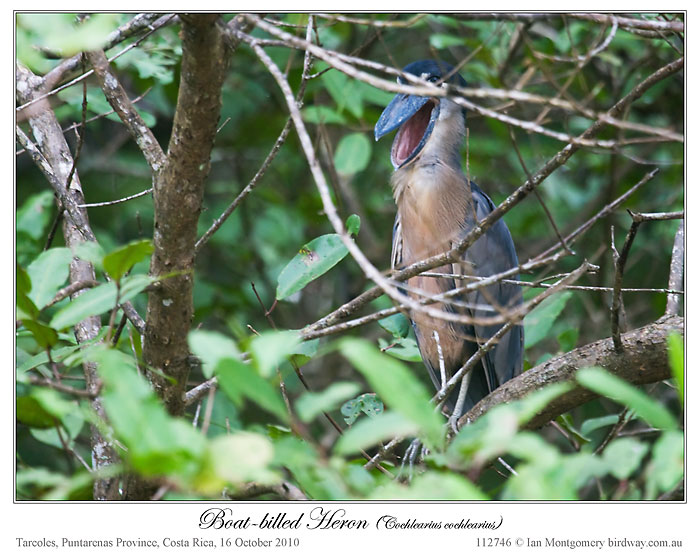 There have got to be the strangest looking herons, with their huge bills, though otherwise they show some resemblance to Night-Herons and are also nocturnal – hence the large eyes. The bill looks it’s designed a heavy duty task like crushing crabs, but in fact it is used rather passively as a scoop and Boat-bills eat a variety of invertebrates and small vertebrates unlucky enough to get in the way. In the past they have been given their own mono-typic family, but DNA research has shown that they are related to both the Tiger-Herons and the Night-Herons.

I first got interested them when reading about them in Trinidad in 2005 where they are rare. Elsewhere in South America they are reasonably common with a range extending from Mexico to northern Argentina. There are five sub-species, sometimes treated as two species, Northern and Southern, but the Costa Rican race (panamensis) is intermediate between the two extremes and it is usual now to treat them as a single species.

I’m enjoying being back home in North Queensland, though the first week here has been a busy one as I’ve been preparing material for a workshop on wader identification tomorrow. When that is out of the way, I can get back to the website and the rest of my domestic routine in earnest.

the stork, the heron after its kind, and the hoopoe and the bat. (Deuteronomy 14:18 NKJV)

Boat-billed Herons belong to the Ardeidae Family of the Pelecaniformes Order. I am glad Ian managed to get photos of it. We were able to get photos at the National Aviary in Pittsburgh and a Lowry Park Zoo in Tampa, FL. It is really an interesting beak that the Boat-billed has. The Heron is one of the Birds of the Bible. 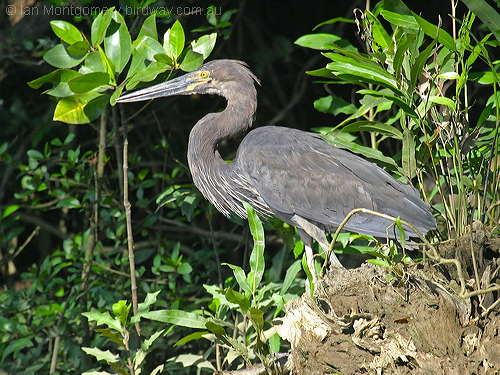 I just completed the first Birds of the World Family page. Well, at least as far as I can find photos for it. I now only have 223 more family pages to go.

Check it out at Family – Ardeidae It is part of the PELECANIFORMES Order. At least according to the latest IOC 2.1 version. I hope you enjoy the photos of the different Bitterns, Egrets and Herons.

Finished the Family – Struthionidae (Ostriches) page today. It is in the Order – STRUTHIONIFORMES Now at 2 down and 222 to go. Plus 37 partial ones – no photos yet.

I finished all 229 (I found some birds that had flown from my original lists)  Bird Family pages as far as the list of each species within the families. Now I am going to make some  indexes to help find the different birds in either taxonomic or alphabetical order. Then I will be adding various photos to each family.

I will also make it a possession for the bittern, and pools of water: and I will sweep it with the besom of destruction, saith the LORD of hosts. (Isaiah 14:23 KJV)

I introduced the Bittern in the first Birds of the Bible – Bittern and now I want to add some more information about them. The Bitterns belong to the Order called Pelecaniformes which includes Ibises, Spoonbills, Herons, Bitterns, Frigatebirds, Hamerkop, Shoebills, Pelicans, Gannets, Boobies, Cormorants, Anhingas, and Darters. All of these birds like to hang out around watery places and are related. Within the Pelecaniformes order, there are different families. The Bittern is in the Ardeidae family. Below is a list of the Bitterns within this family.

Belonging to the Ardeidae family, they also have the usual long legs, long necks, and are wading birds. They are associated with water, especially in breeding season. Whereas the herons and egret stand out in the open, the bitterns like to conceal themselves in cattail and sedge marshes, bulrushes, etc. They also have shorter legs and a heavier body. Their “cryptic plumage and upright poses helps to merge with the brown upright reeds…” I’ve had the privilege to see a few of them, and they are hard to find. God has provided them with this protection and it helps them in finding their food. Fish is their favorite food, but they will also consume frogs, small snakes, and other things that pass by.

Here in North America, we only have the American and Least Bitterns. I sometimes confuse them with the smaller herons, like a Green Heron. You can tell they are in the same family (ardeidae).

But the cormorant and the bittern shall possess it; the owl also and the raven shall dwell in it: and he shall stretch out upon it the line of confusion, and the stones of emptiness. (Isaiah 34:11)

“Recent DNA evidence suggests that this family may in fact belong to the Pelecaniformes.5, From Wikipedia  They used to be in the Ciconiformes family, where most older guide books still have them. My list are from the IOC’s World Lists, 3.1 version.