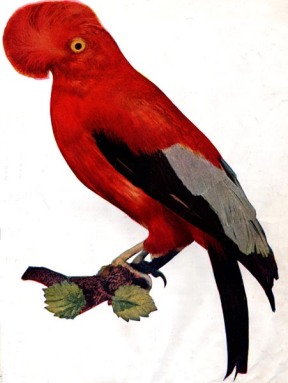 HE Cock-of-the-Rock lives in Guiana. Its nest is found among the rocks. T. K. Salmon says: “I once went to see the breeding place of the Cock-of-the-Rock; and a darker or wilder place I have never been in. Following up a mountain stream the gorge became gradually more enclosed and more rocky, till I arrived at the mouth of a cave with high rock on each side, and overshadowed by high trees, into which the sun never penetrated. All was wet and dark, and the only sound heard was the rushing of the water over the rocks. We had hardly become accustomed to the gloom when a nest was found, a dark bird stealing away from what seemed to be a lump of mud upon the face of the rock. This was a nest of the Cock-of-the-Rock, containing two eggs; it was built upon a projecting piece, the body being made of mud or clay, then a few sticks, and on the top lined with green moss. It was about five feet from the water. I did not see the male bird, and, indeed, I have rarely ever seen the male and female birds together, though I have seen both sexes in separate flocks.”

The eggs are described as pale buff with various sized spots of shades from red-brown to pale lilac.

It is a solitary and wary bird, feeding before sunrise and after sunset and hiding through the day in sombre ravines.

“While traversing the mountains of Western Guiana we fell in with a pack of these splendid birds, which gave me the opportunity of being an eye witness of their dancing, an accomplishment which I had hitherto regarded as a fable. We cautiously approached their ballet ground and place of meeting, which lay some little distance from the road. The stage, if we may so call it, measured from four to five feet in diameter; every blade of grass had been removed and the ground was as smooth as if leveled by human hands. On this space we saw one of the birds dance and jump about, while the others evidently played the part of admiring spectators. At one moment it expanded its wings, threw its head in the air, or spread out its tail like a peacock scratching the ground with its foot; all this took place with a sort of hopping gait, until tired, when on emitting a peculiar note, its place was immediately filled by another performer. In this manner the different birds went through their terpsichorean exercises, each retiring to its place among the spectators, who had settled on the low bushes near the theatre of operations. We counted ten males and two females in the flock. The noise of a breaking stick unfortunately raised an alarm, when the whole company of dancers immediately flew off.”

The Cock-Of-The-Rock video by IBirdCollection

I removed one paragraph that talked about natives killing some of them. The Cock-of the-Rock is an interesting bird. Just their appearance tickles me. They don’t seem to have a beak. There are two Cock-of-the-rocks; the Guianan and the Andean which is the National Bird of Peru.

“The Cock-of-the-rock, which compose the genus Rupicola, are South American cotingid birds. They are found in tropical and subtropical rainforests close to rocky areas, where they build their nests. Like some other cotingids, they have a complex court behaviour, performing impressive lek displays.

The males are magnificent birds, not only because of their bright orange or red colors, but also because of their very prominent fan-shaped crests. The far duller females are overall brownish. They are wary animals and primarily feed on fruits and berries.” (Wikipedia)

The Cotingidae – Cotingas Family is where you will find the Cock-of-the-Rocks. “The cotingas are a large family of passerine bird species found in Central America and tropical South America. Cotingas are birds of forests or forest edges, which mostly eat fruit or insects and fruit. Comparatively little is known about this diverse group, although all have broad bills with hooked tips, rounded wings, and strong legs. They may be the most diverse passerine family in body size, ranging from the 8-cm Kinglet Calyptura to the 50-cm male Amazonian Umbrellabird, although the smaller bird may not be a true cotinga.

The males of many species, such as the cock-of-the-rocks, are brightly coloured, or decorated with plumes or wattles, like the umbrellabirds, with their umbrella-like crest and long throat wattles. Some, like the bellbirds and the Screaming Piha, have distinctive and far-carrying calls. The females of most species are duller than the males.

Most species are polygynous, and only the females care for the eggs and young. Both brilliant male colors and loud vocalizations are the result of sexual selection. Many have striking courtship displays, often grouped together in leks. In such canopy-dwelling genera as Carpodectes, Cotinga, and Xipholena, males gather high in a single tree or in adjacent trees, but male cocks-of-the-rock, as befits their more terrestrial lives, give their elaborate displays in leks on the ground.

On the other hand, the Purple-throated Fruitcrow lives in mixed groups in which one female lays an egg and the others help provide insects to the chick.

Nests differ greatly. Many species lay a single egg in a nest so flimsy that the egg can be seen from underneath. This may make the nests hard for predators to find. Fruiteaters build more solid cup nests, and the cocks-of-the-rock attach their mud nests to cliffs.”

The above article is the sixth article in the monthly serial that was started in January 1897 “designed to promote Knowledge of Bird-Live.” These include Color Photography, as they call them, today they are drawings. There are at least three Volumes that have been digitized by Project Gutenberg.

Next Article – The Red Bird Of Paradise