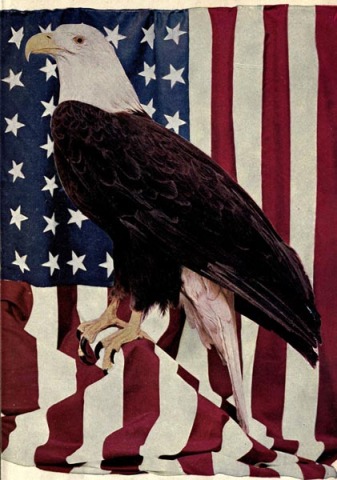 I had hoped to show you the picture of the eagle that went through the war with the soldiers. They called him “Old Abe.” You will find on page 35 a long story written about him. Ask some one to read it to you.

I could not get “Old Abe,” or you should now be looking at his picture. He is at present in Wisconsin, and his owner would not allow him to be taken from home.

I did the next best thing, and found one that was very much like him. They are as near alike as two children of a family. Old Abe’s feathers are not quite so smooth, though. Do you wonder, after having been through the war? He is a veteran, isn’t he?

The picture is that of a Bald-headed Eagle. He is known, also, by other names, such as White-headed Eagle, Bird of Washington, Sea Eagle.

You can easily see by the picture that he is not bald-headed. The name White-headed would seem a better name. It is because at a distance his head and neck appear as though they were covered with a white skin.

He is called “Sea Eagle” because his food is mostly fish. He takes the fish that are thrown upon the shores by the waves, and sometimes he robs the Fish Hawk of his food. (Not today – there is a Sea Eagle which is a different Eagle.)

This mighty bird usually places his large nest in some tall tree. He uses sticks three to five feet long, large pieces of sod, weeds, moss, and whatever he can find.

The nest is sometimes five or six feet through. Eagles use the same nest for years, adding to it each year.

Young eagles are queer looking birds. When hatched, they are covered with a soft down that looks like cotton.

Their parents feed them, and do not allow them to leave the nest until they are old enough to fly. When they are old enough, the mother bird pushes them out of the nest. She must be sure that they can fly, or she would not dare do this. Don’t you think so?

Eagle in nest feeding eaglets-zoomed in by Dan

THIS mighty bird of lofty flight is a native of the whole of North America, and may be seen haunting the greater portions of the sea coasts, as well as the mouths of large rivers. He is sometimes called the White-headed Eagle, the American Sea Eagle, the Bird of Washington, the Washington Eagle, and the Sea Eagle. On account of the snowy white of his head and neck, the name Bald Eagle has been applied to him more generally than any other.

Sea-faring men are partial to young Eagles as pets, there being a well established superstition among them that the ship that carries the “King of Birds” can never go down. The old Romans, in selecting the Eagle as an emblem for their imperial standard, showed this superstitious belief, regarding him as the favorite messenger of Jupiter, holding communion with heaven. The Orientals, too, believed that the feathers of the Eagle’s tail rendered their arrows invincible. The Indian mountain tribes east of Tennessee venerated the Eagle as their bird of war, and placed a high value on his feathers, which they used for headdresses and to decorate their pipes of peace.

The United States seems to have an abiding faith in the great bird, as our minted dollars show.

The nest of the Bald Eagle is usually placed upon the top of a giant tree, standing far up on the side of a mountain, among myriads of twining vines, or on the summit of a high inaccessible rock. The nest in the course of years, becomes of great size as the Eagle lays her eggs year after year in the same nest, and at each nesting season adds new material to the old nest. It is strongly and comfortably built with large sticks and branches, nearly flat, and bound together with twining vines. The spacious interior is lined with hair and moss, so minutely woven together as to exclude the wind. The female lays two eggs of a brownish red color, with many dots and spots, the long end of the egg tapering to a point. The parents are affectionate, attend to their young as long as they are helpless and unfledged, and will not forsake them even though the tree on which they rest be enveloped in flames. When the Eaglets are ready to fly, however, the parents push them from the perch and trust them to the high atmospheric currents. They turn them out, so to speak, to shift for themselves.

The Bald Eagle has an accommodating appetite, eating almost anything that has ever had life. He is fond of fish, without being a great fisher, preferring to rob the Fish-hawk of the fruits of his skillful labor. Sitting upon the side of a mountain his keen vision surveys the plain or valley, and detects a sheep, a young goat, a fat turkey or rooster, a pig, a rabbit or a large bird, and almost within an eye-twinkle he descends upon his victim. A mighty grasp, a twist of his talons, and the quarry is dead long before the Eagle lays it down for a repast. The impetuosity and skill with which he pursues, overtakes and robs the Fish-hawk, and the swiftness with which the Bald Eagle darts down upon and seizes the booty, which the Hawk has been compelled to let go, is not the least wonderful part of this striking performance.

Range—North America, breeding throughout its range.

Today the Bald-headed Eagle is just the Bald Eagle. The Sea Eagle is a different Eagle, much larger than the Bald. Also, not so sure about 160 year life span. Will have to check that out.

We are fortunate here in Polk County and in Central Florida. We get to see Bald Eagles quite often in the winter. That picture of the nest was taken at South Lake Howard Nature Park where the Eagles return to have young each year. At Circle B Bar Reserve, which we write about, they have several active Bald Eagle nests. Right by our Publix supermarket, the eagles sit on the high electrical posts and scan the area for dinner. I used to have to travel far to see them, but now, we live right where they hang out.

I have to admit that when I see a Bald Eagle fly by or just sitting, I stop in my tracks. There is something about the Bald Eagle’s appearance that appeals to me. Also, the Eagle is a Bible Birds and is mentioned in 34 times in the King James Version, 32 in NKJV, 31 in NASB and 29 times in ESV. It varies in the other versions also. Still it is mentioned about 30 times or so. Most are great verses that tell of their strenght and mighty wings. What a magnificent creation.

Ye have seen what I did unto the Egyptians, and how I bare you on eagles’ wings, and brought you unto myself. (Exodus 19:4 KJV)

But they that wait upon the LORD shall renew their strength; they shall mount up with wings as eagles; they shall run, and not be weary; and they shall walk, and not faint. (Isaiah 40:31 KJV)

Make thee bald, and poll thee for thy delicate children; enlarge thy baldness as the eagle; for they are gone into captivity from thee. (Micah 1:16 KJV)

Next Article – The Semi-Palmated Ring Plover

Birds of the Bible – Eagles