The “Cuckoo” or old English”Cuckow” is found in these verses:

and the owl, and the night-hawk, and the cuckoo, and the hawk after its kind, (Leviticus 11:16 YLT)

The Old Testament was written in Hebrew and the word used has several meanings and so some Bibles call the bird a Cuckoo or Cuckow, some a Gull. For now, we are introducing you to Cuckoos.

Did you think Cuckoos only live in Clocks?

No, there actually is a bird called a Cuckoo. It belongs to a family Cuculidae – Cuckoos. There are 149 species in the family. Not only Cuckoos, but Coucals, Anis, Couas, and Malkohas are family members.

Here are some descriptions of North American Cuckoos: (from Color Key to NA Birds) 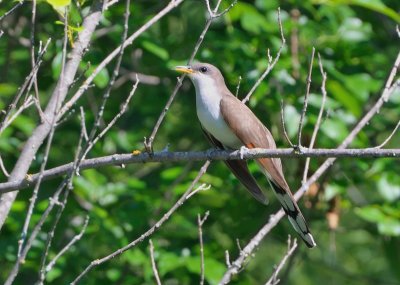 California Cuckoo (C. a. occidentalis). Similar to Yellow-billed Cuckoo but somewhat grayer and larger; the bill slightly longer, 1.05 in.

Black-billed Cuckoo (Coccyzus erythrophthalmus). Length 11.8. Ads. White below; bill black; tail, seen from below, grayish narrowly tipped with white; above, especially on crown, browner than Yellow-billed Cuckoo. Notes. Similar to those of Yellow-billed Cuckoo, but softer, the cow notes connected.

Cuckoo Sound with Pictures (From Poland)

We will tell you more about the Cuckoo in the next Bible Birds – Cuckoo article.