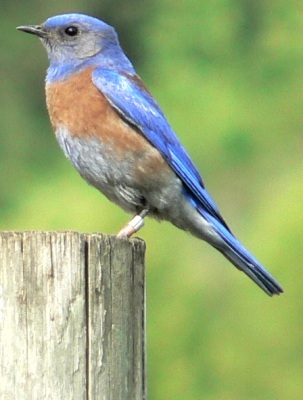 Peter Learns Something He Hadn’t Guessed

The Bluebird and the Robin

Running over to the Old Orchard very early in the morning for a little gossip with Jenny Wren and his other friends there had become a regular thing with Peter Rabbit. He was learning a great many things, and some of them were most surprising.

Now two of Peter’s oldest and best friends in the Old Orchard were Winsome Bluebird and Welcome Robin. Every spring they arrived pretty nearly together, though Winsome Bluebird usually was a few days ahead of Welcome Robin. This year Winsome had arrived while the snow still lingered in patches. He was, as he always is, the herald of sweet Mistress Spring. And when Peter had heard for the first time Winsome’s soft, sweet whistle, which seemed to come from nowhere in particular and from everywhere in general, he had kicked up his long hind legs from pure joy. Then, when a few days later he had heard Welcome Robin’s joyous message of “Cheer-up! Cheer-up! Cheer-up! Cheer-up! Cheer!” from the tiptop of a tall tree, he had known that Mistress Spring really had arrived. 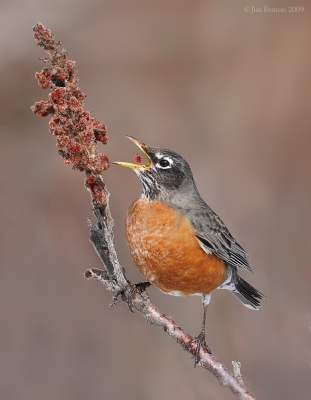 Peter loves Winsome Bluebird and Welcome Robin, just as everybody else does, and he had known them so long and so well that he thought he knew all there was to know about them. He would have been very indignant had anybody told him he didn’t.

“Those cousins don’t look much alike, do they?” remarked Jenny Wren, as she poked her head out of her house to gossip with Peter.

“What cousins?” demanded Peter, staring very hard in the direction in which Jenny Wren was looking.

“Those two sitting on the fence over there. Where are your eyes, Peter?” replied Jenny rather sharply.

Peter stared harder than ever. On one post sat Winsome Bluebird, and on another post sat Welcome Robin. “I don’t see anybody but Winsome and Welcome, and they are not even related,” replied Peter with a little puzzled frown.

“What?” exclaimed Peter, looking as if he didn’t believe a word of what Jenny Wren had said. Jenny repeated, and still Peter looked doubtful.

Then Jenny lost her temper, a thing she does very easily. “If you don’t believe me, go ask one of them,” she snapped, and disappeared inside her house, where Peter could hear her scolding away to herself.

The more he thought of it, the more this struck Peter as good advice. So he hopped over to the foot of the fence post on which Winsome Bluebird was sitting. “Jenny Wren says that you and Welcome Robin are cousins. She doesn’t know what she is talking about, does she?” asked Peter. 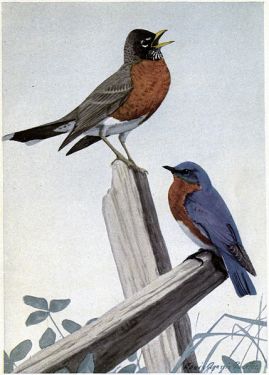 Winsome chuckled. It was a soft, gentle chuckle. “Yes,” said he, nodding his head, “we are. You can trust that little busybody to know what she is talking about, every time. I sometimes think she knows more about other people’s affairs than about her own. Welcome and I may not look much alike, but we are cousins just the same. Don’t you think Welcome is looking unusually fine this spring?”

“Not a bit finer than you are yourself, Winsome,” replied Peter politely. “I just love that sky-blue coat of yours. What is the reason that Mrs. Bluebird doesn’t wear as bright a coat as you do?”

“Go ask Jenny Wren,” chuckled Winsome Bluebird, and before Peter could say another word he flew over to the roof of Farmer Brown’s house.

Back scampered Peter to tell Jenny Wren that he was sorry he had doubted her and that he never would again. Then he begged Jenny to tell him why it was that Mrs. Bluebird was not as brightly dressed as was Winsome.

“Mrs. Bluebird, like most mothers, is altogether too busy to spend much time taking care of her clothes; and fine clothes need a lot of care,” replied Jenny. “Besides, when Winsome is about he attracts all the attention and that gives her a chance to slip in and out of her nest without being noticed. I don’t believe you know, Peter Rabbit, where Winsome’s nest is.”

Peter had to admit that he didn’t, although he had tried his best to find out by watching Winsome. “I think it’s over in that little house put up by Farmer Brown’s boy,” he ventured. “I saw both Mr. and Mrs. Bluebird go in it when they first came, and I’ve seen Winsome around it a great deal since, so I guess it is there.”

“So you guess it is there!” mimicked Jenny Wren. “Well, your guess is quite wrong, Peter; quite wrong. As a matter of fact, it is in one of those old fence posts. But just which one I am not going to tell you. I will leave that for you to find out. Mrs. Bluebird certainly shows good sense. She knows a good house when she sees it. The hole in that post is one of the best holes anywhere around here. If I had arrived here early enough I would have taken it myself. But Mrs. Bluebird already had her nest built in it and four eggs there, so there was nothing for me to do but come here. Just between you and me, Peter, I think the Bluebirds show more sense in nest building than do their cousins the Robins. There is nothing like a house with stout walls and a doorway just big enough to get in and out of comfortably.”

Peter nodded quite as if he understood all about the advantages of a house with walls. “That reminds me,” said he. “The other day I saw Welcome Robin getting mud and carrying it away. Pretty soon he was joined by Mrs. Robin, and she did the same thing. They kept it up till I got tired of watching them. What were they doing with that mud?” 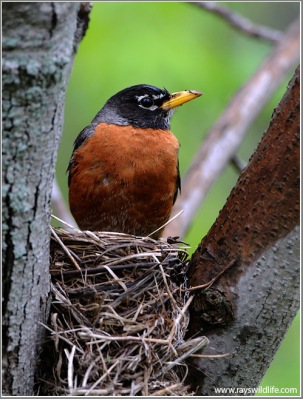 “Building their nest, of course, stupid,” retorted Jenny. “Welcome Robin, with that black head, beautiful russet breast, black and white throat and yellow bill, not to mention the proud way in which he carries himself, certainly is a handsome fellow, and Mrs. Robin is only a little less handsome. How they can be content to build the kind of home they do is more than I can understand. People think that Mr. Wren and I use a lot of trash in our nest. Perhaps we do, but I can tell you one thing, and that is it is clean trash. It is just sticks and clean straws, and before I lay my eggs I see to it that my nest is lined with feathers. More than this, there isn’t any cleaner housekeeper than I am, if I do say it.

“Welcome Robin is a fine looker and a fine singer, and everybody loves him. But when it comes to housekeeping, he and Mrs. Robin are just plain dirty. They make the foundation of their nest of mud,—plain, common, ordinary mud. They cover this with dead grass, and sometimes there is mighty little of this over the inside walls of mud. I know because I’ve seen the inside of their nest often. Anybody with any eyes at all can find their nest. More than once I’ve known them to have their nest washed away in a heavy rain, or have it blown down in a high wind. Nothing like that ever happens to Winsome Bluebird or to me.”

Jenny disappeared inside her house, and Peter waited for her to come out again. Welcome Robin flew down on the ground, ran a few steps, and then stood still with his head on one side as if listening. Then he reached down and tugged at something, and presently out of the ground came a long, wriggling angleworm. Welcome gulped it down and ran on a few steps, then once more paused to listen. This time he turned and ran three or four steps to the right, where he pulled another worm out of the ground.

“He acts as if he heard those worms in the ground,” said Peter, speaking aloud without thinking.

“He does,” said Jenny Wren, poking her head out of her doorway just as Peter spoke. “How do you suppose he would find them when they are in the ground if he didn’t hear them?”

“Can you hear them?” asked Peter.

“I’ve never tried, and I don’t intend to waste my time trying,” retorted Jenny. “Welcome Robin may enjoy eating them, but for my part I want something smaller and daintier, young grasshoppers, tender young beetles, small caterpillars, bugs and spiders.”

Peter had to turn his head aside to hide the wry face he just had to make at the mention of such things as food. “Is that all Welcome Robin eats?” he asked innocently.

“I should say not,” laughed Jenny. “He eats a lot of other kinds of worms, and he just dearly loves fruit like strawberries and cherries and all sorts of small berries. Well, I can’t stop here talking any longer. I’m going to tell you a secret, Peter, if you’ll promise not to tell.”

Of course Peter promised, and Jenny leaned so far down that Peter wondered how she could keep from falling as she whispered, “I’ve got seven eggs in my nest, so if you don’t see much of me for the next week or more, you’ll know why. I’ve just got to sit on those eggs and keep them warm.”

“Is anyone among you suffering? Then he must pray. Is anyone cheerful? He is to sing praises. (James 5:13 NASB)

“A joyful heart makes a cheerful face, But when the heart is sad, the spirit is broken. (Proverbs 15:13 NASB)

“Even the stork in the sky Knows her seasons; And the turtledove and the swift and the thrush Observe the time of their migration; But My people do not know The ordinance of the LORD. (Jeremiah 8:7 NASB)

Next Chapter – An Old Friend In a New Home.