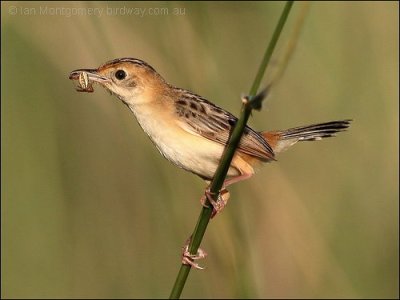 The flowers appear on the earth; The time of singing has come, And the voice of the turtledove (Cisticola?) Is heard in our land. (Song of Solomon 2:12 NKJV)

This family probably originated in Africa, which has the majority of species, but there are representatives of the family across tropical Asia into Australasia, and one species, the zitting cisticola, even breeds in Europe.

These are generally very small birds of drab brown or grey appearance found in open country such as grassland or scrub. They are often difficult to see and many species are similar in appearance, so the song is often the best identification guide.

By them the birds of the heavens have their home; They sing among the branches. (Psalms 104:12 NKJV)

These are insectivorous birds which nest low in vegetation.

Serve the LORD with gladness; Come before His presence with singing. (Psalms 100:2 NKJV)

“How Can I Keep From Singing?” ~  by the Trio + 1 (Pastor Jerry, Reagan Osborne, Caleb & Jessie Padgett) Faith Baptist