Water and Food Holders for the Cages – Lee at Ark Encounter

This is the fourth blog about Birdwatching on board the Ark Encounter. The Ark Encounter is a full-sized model of the Ark that is located in Williamstown, Kentucky.

James J. S. Johnson, Dr. Jim as I call him, writes articles here, but he also has a blog called Rockdoveblog. He has been writing limericks lately, and this one fits well with today’s article.

There once was a boat called the Ark:
Peep, meow, baa, hee-haw, and bark!
Its size was quite large,
As afloat went this barge:
Noah’s at-sea zoölogical park!

I am sure it WAS interesting on board the Ark, with all the many critters. In the Birdwatching On Board The Ark Encounter – The Provisions I article, I showed you how they stored the food and water for them and the critters. There are more photos to show and tell you about. As the waters were lifted up, and the ark began to float, there had to be a rise in the noise level of the critters on board. 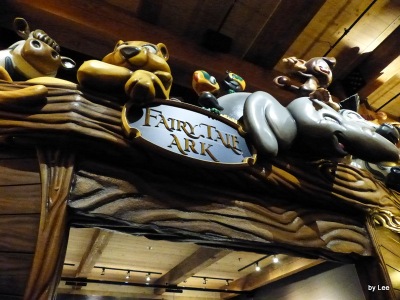 Surely the critters were frightened at times, as were the humans. When the fountains of the deep broke up and the rain fell, it was not a smooth sailing cruise liner. Yet, the Lord God had given Noah the measurements and design for the Ark. Our Omninescient Creator knew exactly how the Ark would hold up during the upheavals and wave actions of all that was going on outside the Ark. (See “Lifted Up From The Earth” by Henry M. Morris, Ph.D.,  How Could All the Animals Get On Board Noah’s Ark? and The Survival of Noah’s Ark, John D. Morris, Ph.D.)

“In the six hundredth year of Noah’s life, in the second month, the seventeenth day of the month, the same day were all the fountains of the great deep broken up, and the windows of heaven were opened. And the rain was upon the earth forty days and forty nights.” (Genesis 7:11-12 KJV)

Most of our readers are familiar with the details of the Flood, which was universal and not a local flood, as some claim. In fact, one of the rooms at the Ark Encounter they call the “Fairy Tale Ark” room. They have a collection of children’s books and others, depicting the ark with a giraffe sticking his head out the roof, and other critters on deck. You’ve seen them. Here are our photos: 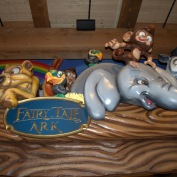 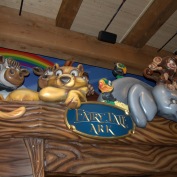 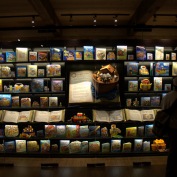 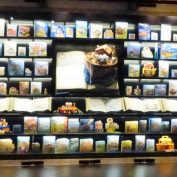 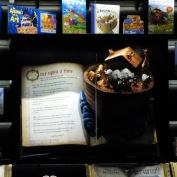 The Fairy Tale Ark Room at the Ark Encounter

How would you provide for the people, birds and other critters for a year and at least 10 days, (see Provisions I), on those little arks? You couldn’t!!! More on this point another time.

The following is a quote from Chapter 10 of the New Answers Book 1 – Was There Really a Noah’s Ark and Flood? (Online)

“How Did Noah Care for All the Animals?

Just as God brought the animals to Noah by some form of supernatural means, He surely also prepared them for this amazing event. Creation scientists suggest that God gave the animals the ability to hibernate, as we see in many species today. Most animals react to natural disasters in ways that were designed to help them survive. It’s very possible many animals did hibernate, perhaps even supernaturally intensified by God.

Whether it was supernatural or simply a normal response to the darkness and confinement of a rocking ship, the fact that God told Noah to build rooms (“qen”—literally in Hebrew “nests”) in Genesis 6:14 implies that the animals were subdued or nesting. God also told Noah to take food for them (Genesis 6:21), which tells us that they were not in a yearlong coma either.”

“Were we able to walk through the Ark as it was being built, we would undoubtedly be amazed at the ingenious systems on board for water and food storage and distribution. As Woodmorappe explains in Noah’s Ark: A Feasibility Study, a small group of farmers today can raise thousands of cattle and other animals in a very small space. One can easily imagine all kinds of devices on the Ark that would have enabled a small number of people to feed and care for the animals, from watering to waste removal.”

If God did choose to have the “animals hibernate,” then, this would have required less provisions and time feeding the critters. That could be one way to stretch the food they had on board. Just from today’s behavior, we know that Hummingbirds go into a “torpor” state. Here is a quote from “How Do Hummingbirds survive Cold Nights? Hummingbirds and Torpor” (ScienceBlogs)

“Torpor is a type of deep sleep where an animal lowers its metabolic rate by as much as 95%. By doing so, a torpid hummingbird consumes up to 50 times less energy when torpid than when awake. This lowered metabolic rate also causes a cooled body temperature. A hummingbird’s night time body temperature is maintained at a hypothermic threshold that is barely sufficient to maintain life. This threshold is known as their set point and it is far below the normal daytime body temperature of 104°F or 40°C recorded for other similarly-sized birds.”

I can see again, we are going to need a Part III to this. But before we end this one, we need to not lose the fact of the applications with these provisions. Our Lord has provided us with daily provisions and meets our many needs. Yet, this Ark was for the preservation of those inside. Many were invited to get in the Ark, but they refused. Judgment was coming, they had been warned, yet they refused to heed the warnings. Then, it was too late. The Door was shut.

“For then must he often have suffered since the foundation of the world: but now once in the end of the world hath he appeared to put away sin by the sacrifice of himself. And as it is appointed unto men once to die, but after this the judgment: So Christ was once offered to bear the sins of many; and unto them that look for him shall he appear the second time without sin unto salvation.” (Hebrews 9:26-28 KJV)

Before the Flood, man was able to look ahead to the cross, and now we look back at the cross. The Door was available the pre-flood people, they refused, except eight. Now the Door is open to us. Praise the Lord, Dan and I, along with many of you have opened the door of your hearts and let the Lord in. 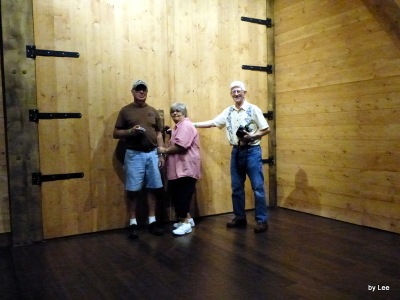 The Door at the Ark Encounter – Dan and our friends

“Then said Jesus unto them again, Verily, verily, I say unto you, I am the door of the sheep. All that ever came before me are thieves and robbers: but the sheep did not hear them. I am the door: by me if any man enter in, he shall be saved, and shall go in and out, and find pasture.” (John 10:7-9 KJV)