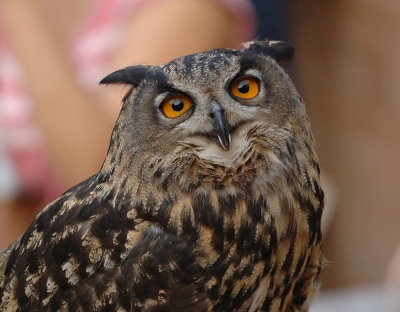 1. Almighty; possessing unlimited power; all powerful. The being that can create worlds must be omnipotent.

2. Having unlimited power of a particular kind; as omnipotent love.

The Great Horned Owl (Bubo virginianus), also known as the tiger owl (originally derived from early naturalists’ description as the “winged tiger” or “tiger of the air”) or the hoot owl, is a large owl native to the Americas. It is an extremely adaptable bird with a vast range and is the most widely distributed true owl in the Americas. The great horned owl is one of the earliest nesting birds in North America, often laying eggs weeks or even months before other raptorial birds.

All great horned owls have a facial disc. This can be reddish, brown or gray in color (depending on geographical and racial variation) and is demarked by a dark rim culminating in bold, blackish side brackets. This species’ “horns” are tufts of feathers, called plumicorns. The purpose of plumicorns is not fully understood, but the theory that they serve as a visual cue in territorial and socio-sexual interactions with other owls is generally accepted.

Birds of the Bible – Owls