“Who is like unto thee, O LORD, among the gods? who is like thee, glorious in holiness, fearful in praises, doing wonders?” (Exodus 15:11 KJV)

FE’ARFUL, a.
1. Affected by fear; feeling pain in expectation of evil; apprehensive with solicitude; afraid. I am fearful of the consequences of rash conduct. Hence,
2. Timid; timorous; wanting courage.
“What man is there that is fearful and fainthearted?” Deu 20.
3. Terrible; impressing fear; frightful; dreadful.
“It is a fearful thing to fall into the hands of the living God.” Heb 10.
4. Awful; to be reverenced.
“That thou mayest fear this glorious and fearful name, Jehovah, thy God.” Deu 28.

Fearful can be used both ways, but for this article, I chose to think of the Lord attribute of Fearful as awesome in doing wonders. Matthew 8:26 He told them not to be fearful because He was in control. 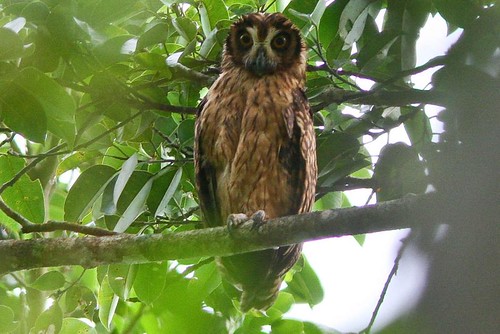 The Fearful Owl (Nesasio solomonensis) is a medium-sized owl endemic to the Solomon Islands archipelago. It is generally seen no more than 800 m above sea level, where it is found in tall lowland or hill forests.

The fearful owl is a large forest owl growing to a length of about 38 cm (15 in). It has a rufous facial disk and distinct white eyebrows. The inner edge of the facial disk is also white. It is usually mottled brown with deep ochre underparts and blackish streaks. This species may be confused with the Solomon hawk owl, although the latter is slightly smaller and more slender. It is also similar in appearance to the laughing owl, which is now extinct.

Its call is similar to a clear human scream, increasing in volume and tone and emitted in a series, each pulse being repeated at intervals of ten seconds.

*** Of course, the bird I chose, the Fearful Owl, did not have but one or two photos to use. Check online for more photos that are copyrighted. Also, there was no blog the last few days, because I have been/am fighting another bad cold. Praying it doesn’t go into bronchitis. ***

4 thoughts on “Avian And Attributes – Fearful”