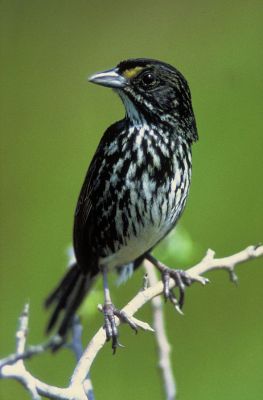 “And he began again to teach by the sea side: and there was gathered unto him a great multitude, so that he entered into a ship, and sat in the sea; and the whole multitude was by the sea on the land.” (Mark 4:1 KJV)

The land bordering on the sea; the country adjacent to the sea, or near it.

Adults have brownish upperparts with gray on the crown and nape, and a grayish-buff-colored breast with dark streaks; they have a dark face with gray cheeks, a white throat, and a short, pointed tail. Birds show a small yellow streak just above the eye.

Their breeding habitat is salt marshes on the Atlantic and Gulf coasts of the United States from southern New Hampshire to southern Texas. The nest is an open cup usually built in the salt marsh on tidal reeds and spartina grasses. Females lay two to five eggs. 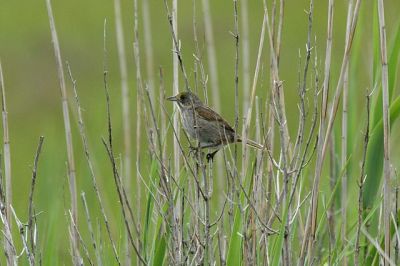 Northern birds most often migrate further south along the eastern coast of the United States. They forage on the ground or in marsh vegetation, sometimes probing in mud. They mainly eat insects, marine invertebrates and seeds. Their feeding areas are often some distance away from the areas they choose to nest.

The song is a raspy buzz that closely resembles a distant red-winged blackbird.

5 thoughts on “Avian And Attributes – Seaside”