McGuffey Readers were a series of graded primers for grade levels 1-6. They were widely used as textbooks in American schools from the mid-19th century to the mid-20th century, and are still used today in some private schools and in homeschooling.

Here is a story of The Eagle from the Fourth Grade Reader. (From Gutenberg) Pictures are current photos. 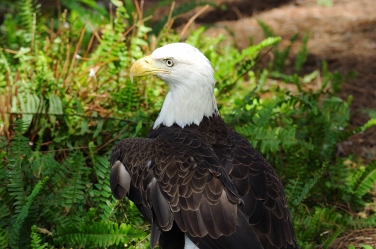 1. The eagle seems to enjoy a kind of supremacy over the rest of the inhabitants of the air. Such is the loftiness of his flight, that he often soars in the sky beyond the reach of the naked eye, and such is his strength that he has been known to carry away children in his talons. But many of the noble qualities imputed to him are rather fanciful than true.

2. He has been described as showing a lofty independence, which makes him disdain to feed on anything that is not slain by his own strength. But Alexander Wilson, the great naturalist, says that he has seen an eagle feasting on the carcass of a horse. The eagle lives to a great age. One at Vienna is stated to have died after a confinement of one hundred and four years.

3. There are several species of the eagle. The golden eagle, which is one of the largest, is nearly four feet from the point of the beak to the end of the tail. He is found in most parts of Europe, and is also met with in America. High rocks and ruined and lonely towers are the places which he chooses for his abode. His nest is composed of sticks and rushes. The tail feathers are highly valued as ornaments by the American Indians. 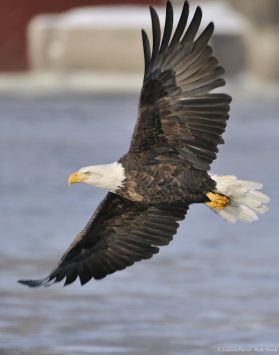 4. The most interesting species is the bald eagle, as this is an American bird, and the adopted emblem of our country. He lives chiefly upon fish, and is found in the neighborhood of the sea, and along the shores and cliffs of our large lakes and rivers.

5. According to the description given by Wilson, he depends, in procuring his food, chiefly upon the labors of others. He watches the fish hawk as he dives into the sea for his prey, and darting down upon him as he rises, forces him to relinquish his victim, and then seizes it before it again reaches the water.

6. One of the most notable species is the harpy eagle. This is said to be bold and strong, and to attack beasts, and even man himself. He is fierce, quarrelsome, and sullen, living alone in the deepest forests. He is found chiefly in South America.