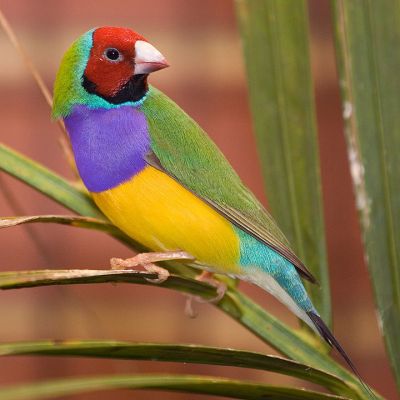 The Gouldian finch (Chloebia gouldiae), also known as the Lady Gouldian finch, Gould’s finch or the rainbow finch, is a colorful passerine bird that is native to Australia. Both sexes are brightly colored with black, green, yellow, and red markings. The females tend to be less brightly colored. One major difference between the sexes is that the male’s chest is purple, while the female’s is a lighter mauve.

Gouldian finches’ heads may be red, black, or yellow. Formerly considered three different kinds of finches, it is now known that these are color variants that exist in the wild. Selective breeding has also developed mutations (blue, yellow and silver instead of a green back) in both body and breast color.

Prior to the Australian government’s ban on the export of Australian fauna, Gouldian finches were exported worldwide. These birds have resulted in viable breeding populations being held in many countries.

Captive breeding has resulted in several colour mutations. Mutations vary by country, with some existing only in Australia (the Australian yellow and the Australian “dilute”) and others existing in greater number in the United States, such as the blue bodied Gouldian. The most common body mutations in the United States are blue, pastel green (single and double-factor, resulting in “dilute” and yellow males and yellow females), and pastel blue (again, single and double-factor producing “pastel” and silver males, and silver hens).

What a beautiful colorful array of the rainbow.

“Many, O LORD my God, are Your wonderful works Which You have done; And Your thoughts toward us Cannot be recounted to You in order; If I would declare and speak of them, They are more than can be numbered.” (Psalms 40:5 NKJV)

“We will not hide them from their children, Telling to the generation to come the praises of the LORD, And His strength and His wonderful works that He has done.” (Psalms 78:4 NKJV) 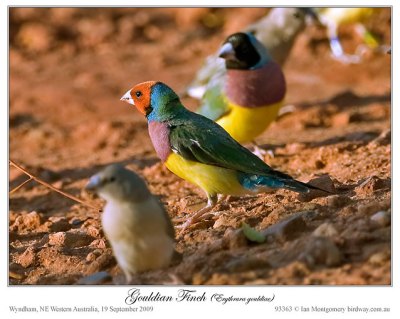 I’m now back home in North Queensland, so it’s perhaps appropriate to select as bird of the week one photographed at the farthest point reached during the trip: Wyndham on the Cambridge Gulf in NE Western Australia. I wanted to go to Wyndham, 100 Km from Kununurra, only because it is on the coast and the journey didn’t seem complete without reaching it. When there, we discovered from the locals that 600 Gouldian Finches were coming in at sunrise to drink at sprinklers in the town.

600 of any endangered species is an awful lot and too good to miss, so a couple of days later I got up at 3:45 am and drove the 100 Km to get there just before sunrise. The usual spot for the finches was very quiet – the Gouldian Finch Recovery Team had been banding them there on previous mornings and had probably put them off it – but I found them at another watering hole nearby. It was possible to drive right up to it, so I stayed in the car and photographed them out of the car window to disturb them less. Naturally, I was too busy to count, but 600 was probably a fair estimate and at one point I had two flocks totally maybe 200 birds in attendance. Most of the birds were juveniles, so they would appear to have had a good breeding season. This was also the case at another water hole near Mary River in Kakadu where we saw maybe 50 Gouldians. 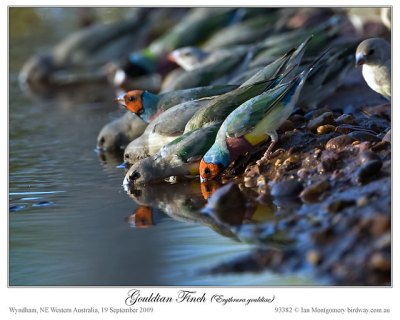 Gouldians come in three forms, depending on the colour of the facial mask. The first photo shows a Red-headed (with, out of focus, a Black-headed in the background and a juvenile in the foreground). The second shows a Black-headed about to drink, beside two juveniles. The third shows two Red-headed birds drinking with juveniles in various degrees of acquiring the adult plumage. The Black-headed is the commonest form (about 75%), then the Red-headed (about 24%) with 1% or less Golden-faced. The females are like the males but less strongly coloured.

I’ve started adding photos from the trip to the website. So far I’ve added:

I’m making a brief visit to Sydney next week to give a talk, with lots of photos, on my 2008 trip to Alaska to Birding NSW on Tuesday 6th Oct. The meeting is open to anyone who would like to attend and is in the Mitchell Theatre, Level 1, Sydney Mechanical School of Arts, 280 Pitt Street, Sydney (between Park and Bathurst): http://www.birdingnsw.org.au/ . The meeting starts at 7:00 pm and my presentation is being preceded by a book launch by author Peter Roberts.

Lee’s Addition:
What neat looking finches and what an adventure Ian has been on. I am not sure which was the “earlier bird.” 3:45am is my sleeping time! Thanks, Ian, for getting there so early so we can enjoy your great photos.

“The Gouldian Finch was described by British ornithological artist John Gould in 1844 and named after his wife Elizabeth. It is also known in America as the Rainbow, Gould, or Lady Gouldian Finch (although Mrs Gould did not hold the title Lady). In Australia it is always called Gouldian Finch. It is a member of the weaver-finch family Estrildidae, which is sometimes considered a subfamily of Passeridae.”
“Gouldian Finches are about 130–140 mm long. Both sexes are brightly coloured with black, green, yellow, red and other colours. The females tend to be less brightly coloured. One major difference between the sexes is that the male’s chest is purple, while the female’s is a lighter mauve colour.

Gouldian Finches’ heads may be red, black, or yellow. People used to think they were three different kinds of finches, but now it is known that they are colour variants that exist in the wild.[1] Selective breeding has also developed mutations (blue, yellow and silver instead of green back) in body colour and breast colour.”

Now Israel loved Joseph more than any other of his sons, because he was the son of his old age. And he made him a robe of many colors. (Genesis 37:3 ESV)

“Juveniles have distinctive colours. Their heads, sides and necks are grey, and their backs, wings and tail feathers are olive green. Their undersides are pale brown. Beaks are blackish with a reddish tip. Their legs and feet are light brown. Newly hatched Gouldian finches are pink and naked until about 12 days old when the beginnings of feathers start to appear. Very young birds also have blue, phosphorescent beads on the sides of their beaks to help their parents see them in the dark.”

“Like other finches, the Gouldian Finch is a seed eater. During the breeding season, Gouldian Finches feed mostly on ripe or half-ripe grass seeds of Sorghum Spc. During the dry season they forage on the ground for fallen seed. During the wet season, Spinifex grass seed [Triodia Spc] is an important component of their diet. So far Gouldians have been recorded as consuming 6 different species of grass seed but during crop analysis researchers have never so far found insects.”

“Gouldian finches generally make their nests in holes in trees, generally within a kilometre or so of water. They usually breed in the early part of the dry season, when there is plenty of food around. The male courtship dance is a fascinating spectacle. When a male is courting a female, he bobs about ruffling his feathers to show off his colours. He expands his chest and fluffs out his forehead feathers. After mating, a female lays a clutch of about 4–8 eggs. Both parents help brood the eggs during the daytime, and the female stays on the eggs at night. When the eggs hatch, both parents help care for the young. Gouldian Finches leave the nest at between 19 and 23 days and are independent at 40 days old.

Young Gouldians are very fragile until their final moult. Some breeders believe parent-raised Gouldians have greater success rearing young than those fostered by other species, such as society or spice finches.

It has been shown scientifically that female finches from Northern Australia are controlling the sex of their offspring, according to the head colour of their male counterpart. Gouldian Finches should not be mated with Gouldian Finches of a different head colour (black-head with red-head etc.) as such a mating will result in an inbalance in the sex ratio of the young, with a greater proportion of male offspring being produced.”