Once again Thanksgiving was coming and Reginald was keeping watch with the rest of his turkey friends to see if any hunters were nearby his home in the woods. This year Reginald and most of the other turkeys had congregated together to determine whether or not they should migrate to another location deeper in the woods. They had kept themselves hidden for the entire year but Reginald had seen several hunters nearby.

Eventually Reginald and the other turkeys decided that it would be best if they traveled deeper into the forest to keep away from the hunters. Reginald decided that they should all travel south where the forest was thicker and the trees were taller. One by one the turkeys all put on their army helmets to sneak off farther south. But Reginald’s cousin, Oliver, had some difficulty putting on his helmet. He kept putting it on backwards. Reginald simply shook his head and spent a good ten minutes trying to pry the helmet off Oliver’s head before finally it popped off.

Reginald set off with the rest of the turkeys behind him. Oliver was the last out of all the turkeys, convinced that a hunter might come out at any moment. He assumed it would be better if he kept watch behind all of them.

The turkeys trekked all day long. At one point a large old tree tipped over and crashed nearby. Oliver, thinking it was a gunshot, began to run around gobbling hysterically. Reginald had to run after him and try to calm him down so the hunters wouldn’t hear Oliver gobbling loudly. After some time Reginald was able to explain in exasperation to Oliver that the noise had only come from a tree. To keep Oliver from getting into any more trouble, Reginald simply shook his head and placed Oliver next to him for the rest of the trip. 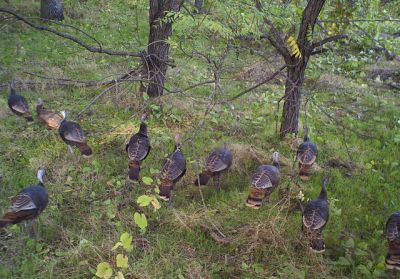 Oliver continued to gobble loudly and flap his wings as the turkeys ran down the bank after him. One of the turkeys grabbed a stray branch and held it out for him. Oliver grabbed the branch and, with the help of Reginald, was dragged back to shore, soaking wet and without his army helmet. Reginald simply shook his head and marched on.

Reginald led the other turkeys farther into the forest, not wasting time to let Oliver dry off. Oliver did have time to dry off late that night when Reginald and the other turkeys built a small fire deep in the forest. They were sure to make the fire just big enough so that no hunters would see them.

After a lengthy discussion, the turkeys decided that this part of the forest was just the right place to hide from the hunters that Thanksgiving. Once again Reginald was able to keep the turkeys safe and they were able to celebrate their Thanksgiving without fear of the hunters. Even Oliver was able to celebrate Thanksgiving although he caught a cold from getting wet. As for the hunters, in order to find any turkey at all they had to hunt at the very other end of the forest far away from Reginald and his friends. Once again, the turkey’s journey had been a success.

“Yea, the stork in the heaven knoweth her appointed times; and the turtle and the crane and the swallow observe the time of their coming [even turkeys]; but my people know not the judgment of the LORD.” (Jeremiah 8:7 KJV)

“Behold, I have given him for a witness to the people, a leader and commander to the people.” (Isaiah 55:4 KJV)

Praise the Lord For All His Blessings!

We have another delightful and interesting story about Reginald, the Commander Turkey from Emma. If you have missed his other adventures, you can read them here:

Reginald the Turkey Commander on Christmas