“The LORD on high is mightier than the noise of many waters, yea, than the mighty waves of the sea.” (Psalms 93:4 KJV)

Today’s Sunday Inspiration will bring us through the last 49 members of the Procellariidae Family. These include Petrels in the Pseudobulweria (5), Procellaria (5), and Bulweria (3) genera, plus 4 Diving Petrels in the Pelecanoides genus. The final group of Shearwaters are in the Calonectris (4), Ardenna (7), and Puffinus (21) genera

“The Pseudobulweria are generally largish darkish petrels, but may have white undersides. They are long-winged and fly about with rather leisurely wingbeats and soar a lot. Though they are attracted by chum, Pseudobulweria petrels are not particularly prone to following ships. They often approach floating prey from downwind, picking it up without landing on the water or during a brief landing in which the wings are kept raised.”

What an amazing Creator these Avian Wonders have to provide so much for them. “Procellaria is a member of the family Procellariidae and the order Procellariiformes. As members of Procellariiformes, they share certain characteristics. First they have tubular nostrils called naricorns. This feature gives them their common name, tubenoses. The opening to the nostril is located differently in some birds. These birds have the opening on top of the upper bill. Second, they produce a stomach oil that contains wax esters and triglycerides. This oil fills two functions. When predators threaten the birds or their chick or egg, they spit the substance on them. This substance has an awful smell, and mats the feathers down, degrading their usefulness. Also, they can digest the wax esters for a high energy source of food, during long flights or the period of time that they are incubating their egg or caring for their young. They also have a uniquely structured bill, with seven to nine distinct horny plates. Finally, they have a salt gland that is located above their nasal passages and helps desalinate their body, as they drink seawater. They excrete the salty waste out their nose.” [Quote from Wikipedia, bolding mine]

Calonectris is a genus of seabirds. The genus name comes from Ancient Greek kalos, “good” and nectris, “swimmer”. Calonectris shearwaters are long-distance migrants. The genus comprises three large shearwaters. There are two other shearwater genera. Puffinus, which comprises about twenty small to medium-sized shearwaters, and Procellaria with another four large species. The latter are usually named as petrels, although they are thought to be more closely related to the shearwaters than to the other petrels.

The species in this group are long-winged birds, dark brown or grey-brown above, and mainly white below. They are pelagic outside the breeding season. They are most common in temperate and cold waters. These tubenose birds fly with stiff wings, and use a shearing flight technique to move across wave fronts with the minimum of active flight. Their flight appears more albatross-like than the Puffinus species.

Ardenna is a genus of seabirds that “comprises a group medium-sized shearwaters. The species were for a long time included in the genus Puffinus but this genus was split based on the results of a phylogenetic analysis of mitochondrial DNA. The genus had been introduced by Ludwig Reichenbach in 1853, although the name was first used to refer to a seabird by Italian naturalist Ulisse Aldrovandi in 1603.”

Puffinus – “The species in this group are long-winged birds, dark brown or black above, and white to dark brown below. They are pelagic outside the breeding season. They are most common in temperate and cold waters. These tubenose birds fly with stiff wings, and use a shearing flight technique to move across wave fronts with the minimum of active flight. Some small species, such as the Manx shearwater, are cruciform in flight, with their long wings held directly out from their bodies.

Many are long-distance migrants, perhaps most spectacularly the sooty and short-tailed shearwaters, which perform migrations of 14,000 km or more each year. Puffinus shearwaters come to islands and coastal cliffs only to breed. They are nocturnal at the colonial breeding sites, preferring moonless nights to minimise predation. They nest in burrows and often give eerie contact calls on their night-time visits. They lay a single white egg.”

Diving Petrels in the Pelecanoides
The diving petrels are seabirds in the bird order Procellariiformes. There are four very similar species all in the family Procellariidae and genus Pelecanoides (Lacépède, 1799), distinguished only by small differences in the coloration of their plumage and their bill construction. They are only found in the Southern Hemisphere.

Diving petrels are auk-like small petrels of the southern oceans. The resemblances with the auks are due to convergent evolution, since both families feed by pursuit diving, although some researchers have in the past suggested that the similarities are due to relatedness. Among the Procellariiformes the diving petrels are the family most adapted to life in the sea rather than flying over it, and are generally found closer inshore than other families in the order. 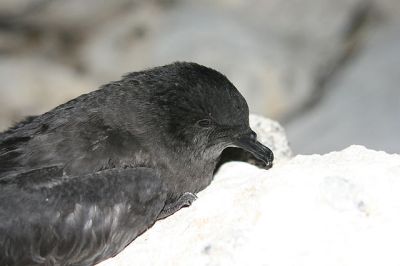 “Bulweria is a genus of seabirds in the family Procellariidae named after English naturalist James Bulwer. The genus has two extant species, Bulwer’s petrel (B. bulwerii) and Jouanin’s petrel (B. fallax). A third species, the Olson’s petrel (Bulweria bifax), became extinct in the early 16th century; it is known only from skeletal remains. Bulwer’s Petrel ranges in the Atlantic, Indian and Pacific Oceans, whereas Joaunin’s Petrel is confined to the northwestern Indian Ocean. Olson’s Petrel is known from the Atlantic.”

[Most information from Wikipedia]

“The mighty God, even the LORD, hath spoken, and called the earth from the rising of the sun unto the going down thereof.” (Psalms 50:1 KJV)