“For unto us a child is born, unto us a son is given: and the government shall be upon his shoulder: and his name shall be called Wonderful, Counsellor, The mighty God, The everlasting Father, The Prince of Peace. Of the increase of his government and peace there shall be no end, upon the throne of David, and upon his kingdom, to order it, and to establish it with judgment and with justice from henceforth even for ever. The zeal of the LORD of hosts will perform this.” (Isaiah 9:6-7 KJV)

Look down from heaven, and behold from the habitation of thy holiness and of thy glory: where is thy zeal and thy strength, the sounding of thy bowels and of thy mercies toward me? are they restrained?” (Isaiah 63:15 KJV)

“For I bear them record that they have a zeal of God, but not according to knowledge.” (Romans 10:2 KJV)

ZEAL, n. [Gr., L.] Passionate ardor in the pursuit of any thing. In general, zeal is an eagerness of desire to accomplish or obtain some object, and it may be manifested either in favor of any person or thing, or in opposition to it, and in a good or bad cause.

They have a zeal of God, but not according to knowledge. Rom 10.

A zeal for liberty is sometimes an eagerness to subvert, with little care what shall be established.Z 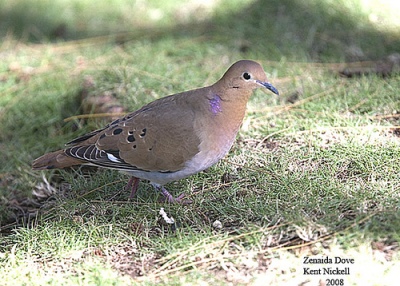 The Zenaida Dove (Zenaida aurita) is a member of the bird family Columbidae, which includes doves and pigeons. It is the national bird of Anguilla, where it is commonly (but erroneously) referred to as a turtle dove. It lays two white eggs on a flimsy platform built on a tree or shrub. It also nests in rock crevices and on grassy vegetation if no predators are present. It has been recorded that some birds have up to 4 broods per year. Eggs take approximately two weeks to hatch, and the young chicks typically fledge after only two weeks in the nest. Parents feed the young pigeon’s milk, a nutrient rich substance regurgitated from its crop.

The bird is resident and abundant over much of its range. The Zenaida Dove is approximately 28–30 cm (11–12 in) in length. It looks very similar to the mourning dove, but is smaller in size, has a shorter, more rounded tail, and is a bit more darkly colored. It is also distinguished from the mourning dove by showing white on the trailing edge of its wings in while in flight. The mourning dove does not have the white trailing edge. (Columbidae – Pigeons, Doves Family)

*** This ends my challenge to Name an Attribute of God, and also show a bird whose last name began with the first letter of the attribute. I had to make a few adjustment, like this Zenaida Dove and X-Exalted. I have decided to go through more Attributes of God alphabetically. This time, the First name of a bird will be used. *** [Trust you enjoyed the first round.] ***

*** Due to Hurricane Irma, we are going to a shelter to hunker down. I may wait to begin the next part of the series when things settle down. Please keep all us in your prayers. ***

One thought on “Avian and Attributes – Zeal”