“Thou hast been in Eden the garden of God; every precious stone was thy covering, the sardius, topaz, and the diamond, the beryl, the onyx, and the jasper, the sapphire, the emerald, and the carbuncle, and gold: the workmanship of thy tabrets and of thy pipes was prepared in thee in the day that thou wast created.” (Ezekiel 28:13 KJV)

Diamond, n. Dimond. [L., Gr. See Adamant.]
1. A mineral, gem or precious stone, of the most valuable kind, remarkable for its hardness, as it scratches all other minerals. When pure, the diamond is usually clear and transparent, but it is sometimes colored. In its rough state, it is commonly in the form of a roundish pebble, or of octahedral crystals. It consists of carbon, and when heated to 14 degrees Wedgewood, and exposed to a current of air, it is gradually, but completely combustible. When pure and transparent, it is said to be of the first water.
2. A very small printing letter.
3. A figure, otherwise called a rhombus.
DIAMOND, a. Resembling a diamond, as a diamond color; or consisting of diamonds, as a diamond chain. 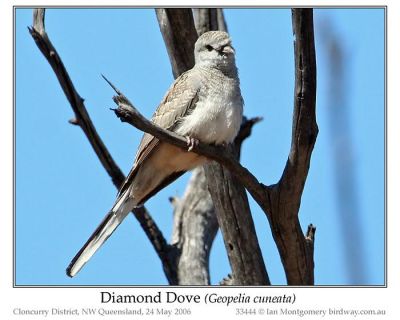 The Diamond Dove (Geopelia cuneata) is a resident bird in Australia. The dove predominantly exists in areas near water but which are lightly arid or semi-arid in nature, being Central, West and Northern Australia. They are one of Australia’s smallest pigeons along with the peaceful dove. They have been spotted occasionally in Southern Australia in parks and gardens when the centre of Australia is very dry.

The Diamond Firetail (Stagonopleura guttata) is a species of estrildid finch that is endemic to Australia. The diamond firetail is a finch that has a fiery red bill, eyes, and rump. Just below the throat, it has a thick black band that extends horizontally until it reaches the lower part of the wings which are also black with white spots. There is also a black eye band that starts at the beak and ends right at the eye. The bird’s tail is also black. The rest of the wings are a slightly tan, light brown colour. Its head and back is light grey and its belly and chin are white. The colour of the egg is also white. This bird is considered one of the smallest of the finches.

Birds whose first or last name start with “D”