“You can start looking forward to a great reunion when I come visit you again. We’ll be praising Christ, enjoying each other.
(Philippians 1:26 MSG)

“Oh, we’ll be walking on air! And then there will be one huge family reunion with the Master. So reassure one another with these words.” (1 Thessalonians 4:18 MSG)

“Then we which are alive and remain shall be caught up together with them in the clouds, to meet the Lord in the air: and so shall we ever be with the Lord. Wherefore comfort one another with these words.” (1 Thessalonians 4:17-18 KJV)

The Réunion harrier or Réunion marsh harrier (Circus maillardi) is a bird of prey belonging to the marsh harrier group of harriers. It is now found only on the Indian Ocean island of Réunion, although fossil material from Mauritius has been referred to this species. It is known locally as the papangue or pied jaune. The Malagasy harrier(C. macrosceles) of Madagascar and the Comoro Islands was previously treated as a subspecies of this bird but is increasingly regarded as a separate species. The Réunion harrier appears to be declining in numbers and it is classed as an endangered species.

The Réunion Ibis or Réunion Sacred Ibis (Threskiornis solitarius) is an extinct species of ibis that was endemic to the volcanic island of Réunion in the Indian Ocean. The first subfossil remains were found in 1974, and the ibis was first scientifically described in 1987. Its closest relatives are the Malagasy sacred ibis, the African sacred ibis, and the straw-necked ibis. 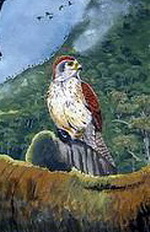 The Réunion Kestrel (Falco duboisi) is an extinct bird of prey which belongs to the falcon family. It inhabited the Mascarene island of Réunion and was part of the Western Indian Ocean radiation of kestrels.

No Photo available with permission. Can see it HERE

The Réunion Night Hheron (Nycticorax duboisi) is an extinct species of heron formerly occurring on the Mascarene island of Réunion.

It was for a long time only known from a single description, that of Dubois published in 1674. He stated:

Bitterns or Great Egrets, large as capons, but very fat and good. They have grey plumage, each feather spotted with white, the neck and beak like a Heron, and the feet green, made like the feet of Poullets d’Inde (Porphyrio, W.R.). This bird lives on fish.[2]

The Réunion Olive White-eye (Zosterops olivaceus) is a species of bird in the family Zosteropidae. It is found on Réunion. Its natural habitats are boreal forests and subtropical or tropical high-altitude grassland.

The Réunion Owl (Mascarenotus grucheti) was a small owl that occurred on the Mascarene island of Réunion, but became extinct before living birds could be described; it is only known from subfossil bones. It belongs to the Mascarene owls of the genus Mascarenotus, and most likely was similar to a long-eared owl in size and appearance, but with nearly naked legs. The Mascarene owls were, however, more closely related to the genus Ninox. Compared to the Mauritius owl and the Rodrigues owl, it was the most terrestrial species of the genus, with long legs and possibly somewhat reduced flight capability; more probably though it was simply smaller than the Mauritius bird – between that species and the one from Rodrigues in size – but had equally long legs: the only suitable food available in quantity on Réunion were small birds.

[No photo available]
The Réunion Rail (Dryolimnas augusti) also known as Dubois’s wood-rail is an extinct rail species which was endemic to the Mascarenes island of Réunion. The scientific name commemorates French poet Auguste de Villèle (1858-1943) whose interest in the history of Réunion and hospitality made it possible for numerous naturalists to discover and explore the caves of Réunion.

The Réunion Shelduck or Kervazo’s Egyptian goose (Alopochen kervazoi) is an extinct species of goose from Réunion. It was a close relative of the Egyptian goose and was about the same size. There is only one description remaining, that of Dubois made in 1674. He merely mentions that they were similar to European geese but smaller, with the bill and feet being red. Apart from that, the species is only known from brief reports and subfossil bones. 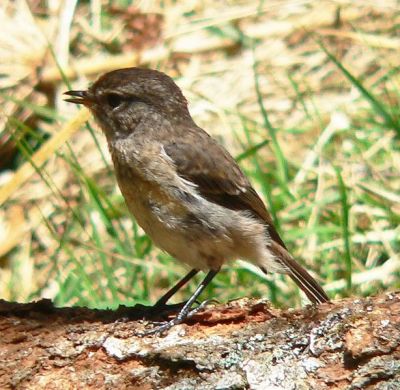 The Réunion Stonechat (Saxicola tectes) is a species of stonechat, endemic to the island of Réunion. This small passerine bird is common in clearings and open mountain bushlands there.

** As I was putting this together, the extinction of so many of these birds reminds us of the verses used. When we get caught for the “Reunion in the Air” we will be extinct down here on earth. Just make sure you have your reservation completed.  Gideon **