“Who provideth for the raven his food? when his young ones cry unto God, they wander for lack of meat.”

The shy bird called Clark’s nutcracker collects food during the growing season and stores it for the cold winter months. In one year, a bird will store between 22,000 and 33,000 seeds in as many as 2,500 locations, which can be more than ten miles apart. But does the little bird remember where he put all those seeds?

Biologists tracked the activity of Clark’s nutcrackers in the San Francisco Peaks in northern Arizona. A small army of researchers tracked the birds’ seed gathering and storing activities. One of the first things they discovered was that the birds quickly figured out that they were being observed. Some refused to store food when researchers were watching them. Others faked storing seeds when they were watched. Back in the lab, researchers studied the storing activity of Eurasian nutcrackers. After the birds stored seeds in a large sand floor, the birds were removed. Then the seeds they stored were dug up. When the birds were allowed to return, they quickly discovered that their seeds had been stolen, so they refused to store any more seeds. In the end, researchers concluded that the nutcrackers recover as many as two-thirds of their stored seeds within 13 months. 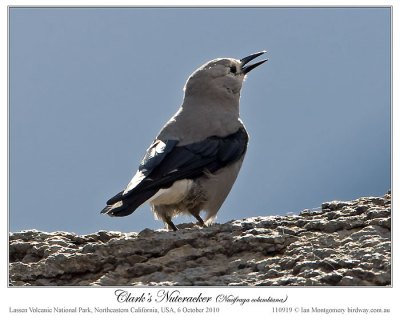 The remarkable memory of these little birds is their gift from God that enables them to be fed all year around.

Prayer: Father, I thank You because You are gracious and generous, not just to the birds, but also to me. Amen.

What an interesting memory. How is your memory doing? Is it as good as these Nutcrackers?