O come, let us worship and bow down: let us kneel before the LORD our maker. (Psalms 95:6 KJV)

Bow down Your ear to me, deliver me speedily! Be my Rock of refuge, a strong Fortress to save me! Yes, You are my Rock and my Fortress; therefore for Your name’s sake lead me and guide me. (Psalms 31:2-3 AMP)

Ian’s Horned Parakeet newsletter showed that the “horn” was really feathers. While on vacation, we also saw birds with prominent feathers. One was walking around the aviary and it was near Dan. He was kneeling down to get a photo and I caught him doing so.

Those western quails like to parade around like they are Royalty. Not really, but they are cute with that bobbing curved topknot. It bobs because of the way they walk around putting their head up and down or “bobbing”. 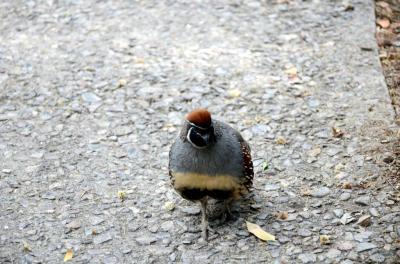 The first quail we encountered were three Gambel’s Quail marching across the road on a street in Tuscon. Then in an aviary we saw this Gambel’s Quail. This is what Dan was taking while I was taking his photo.

We also saw the Scaled Quail there at the Desert Museum’s aviary.

Here are the photos we took of these two quail at the aviary on our vacation: 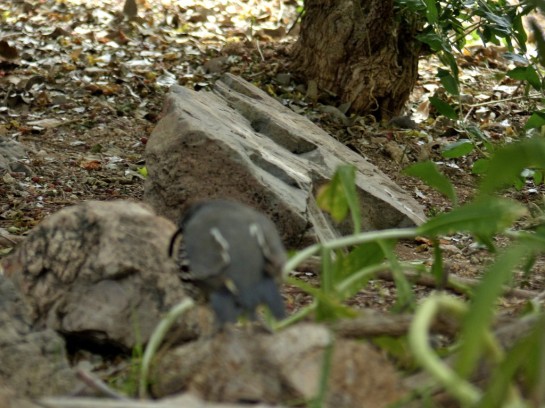 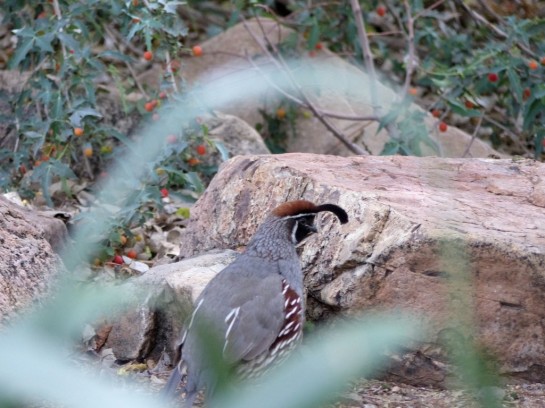 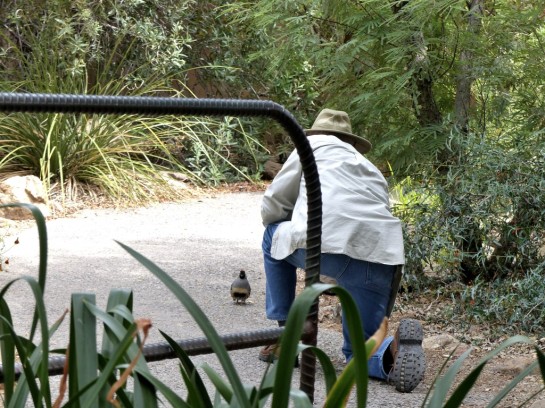 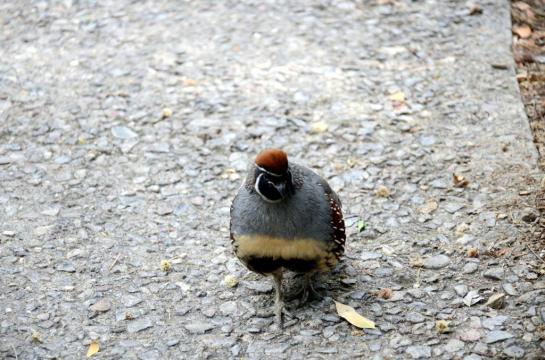 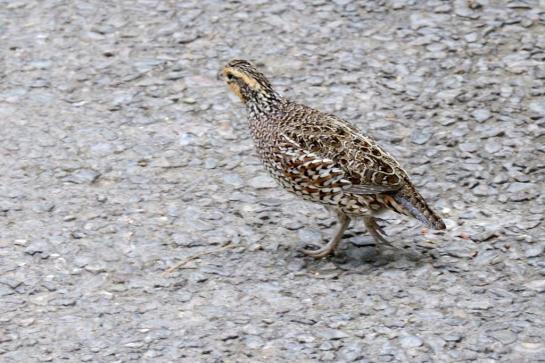 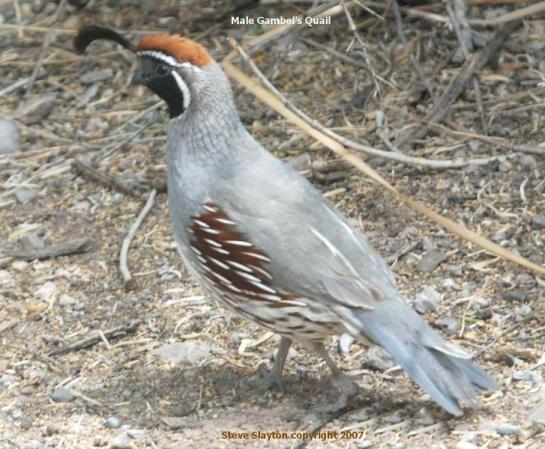 For it is written, As I live, saith the Lord, every knee shall bow to me, and every tongue shall confess to God. (Romans 14:11 KJV)

Wherefore God also hath highly exalted him, and given him a name which is above every name: That at the name of Jesus every knee should bow, of things in heaven, and things in earth, and things under the earth; And that every tongue should confess that Jesus Christ is Lord, to the glory of God the Father. (Philippians 2:9-11 KJV)

*
The Gambel’s quail (Callipepla gambelii) is a small ground-dwelling bird in the New World quail family. It inhabits the desert regions of Arizona, California, Colorado, New Mexico, Nevada, Utah, Texas, and Sonora; also New Mexico-border Chihuahua and the Colorado River region of Baja California. The Gambel’s quail is named in honor of William Gambel, a 19th-century naturalist and explorer of the Southwestern United States.  (Wikipedia)

The Scaled quail (Callipepla squamata), also commonly called blue quail or cottontop, is a species of the New World quail family. It is a bluish gray bird found in the arid regions of the Southwestern United States to Central Mexico. This bird is named for the scaly appearance of its breast and back feathers. Along with its scaly markings, the bird is easily identified by its white crest that resembles a tuft of cotton. (Wikipedia)

Again, while at the Arizona-Sonora Desert Museum, we learned more about the “Cactus Boot.” I was aware that Woodpeckers, especially the local Gila Woodpecker,  make their homes in cactus, especially Saguaro Cactus. I also knew that the cactus, to prevent loss of moisture, seals around the “wound”, a.k.a. nest cavity. Another way the Lord created the plants and birds to survive in the harsh conditions of a desert.

One of the docents gave a short lesson about the cactus and the Saguaro boot that was very interesting. First, notice the ribs or pleats on the cactus. These allow the cactus to expand during the rainy times to allow storage of water. Then as the dry seasons arrive, they will contract again. Wise creation design. The Anatomy section of the Cactaceae (cactus family) has a great explanation about this. “A fully hydrated large stem is more than 90 percent water and weighs 80 pounds per foot (120 kg per meter).”

The wilderness and the wasteland shall be glad for them, And the desert shall rejoice and blossom as the rose; It shall blossom abundantly and rejoice, Even with joy and singing. … They shall see the glory of the LORD, The excellency of our God. (Isaiah 35:1-2 NKJV)

Showing the ribs of a dead Saguaro and holes where the Woodpeckers had their boot.

“Near the center of the stem is a cylinder of 13 to 20 woody ribs running the length of the main stem and branching into the arms. In the upper part of a stem the ribs are separate; as the stem ages the ribs continue to grow and fuse into a latticed cylinder.” 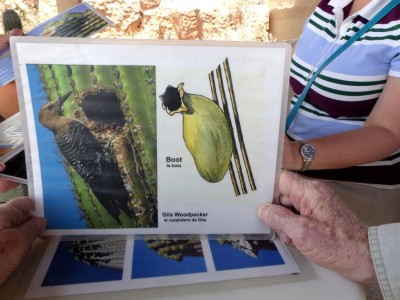 When the Gila Woodpecker and other birds make the nest in the cactus, a hole is created, to the birds preference and then the cactus seals around that area. When they take these cavity nest out of old/dead cactus it looks like a “boot.”

The Gila woodpecker (Melanerpes uropygialis) is a medium-sized woodpecker of the desert regions of the southwestern United States and western Mexico. In the U.S., they range through southeastern California, southern Nevada, Arizona, and New Mexico. (Wiki) 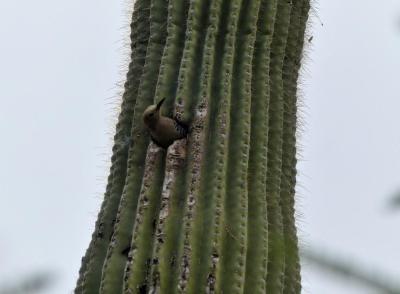 And Jesus said to him, “Foxes have holes and birds of the air have nests, but the Son of Man has nowhere to lay His head.” (Matthew 8:20 NKJV)

Besides the Saguaros, they also make nest in mesquite trees. Their cavaties in the cacti are later used by other species, even the elf owl. They usually lay 3-5 white eggs.

Here are some photos of the Cactus, Birds and Boots: 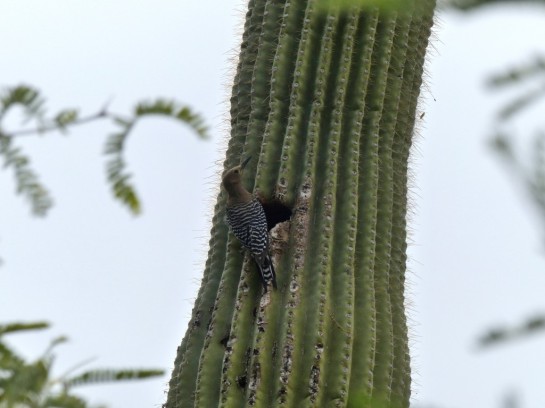 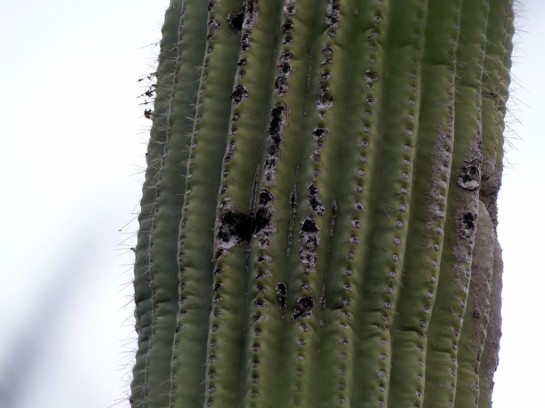 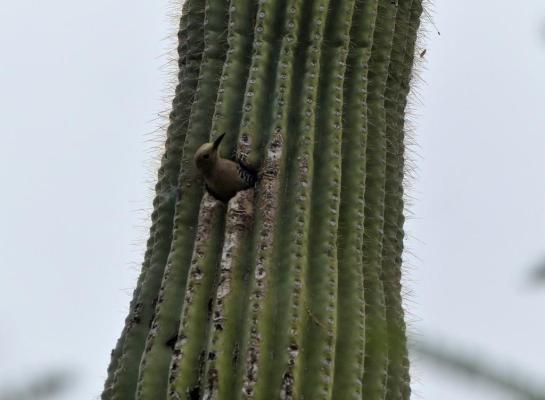 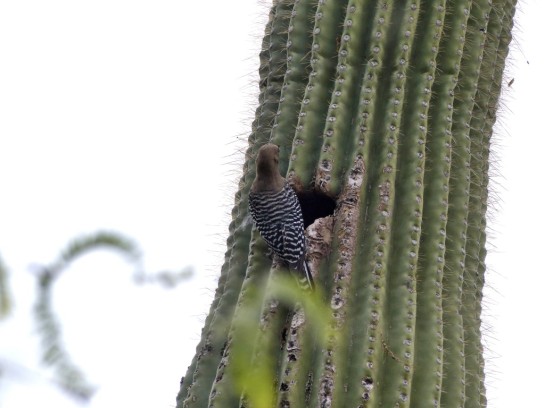 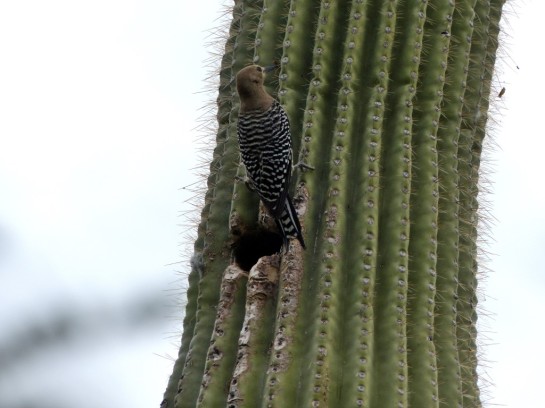 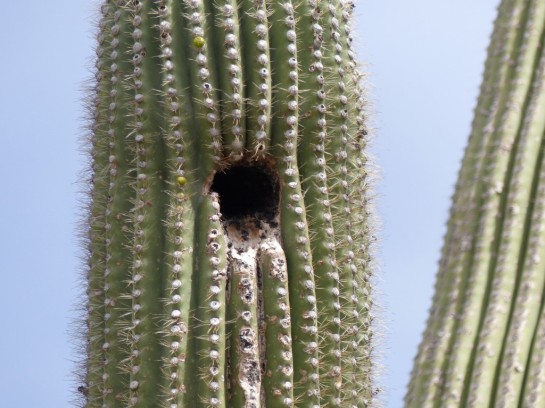 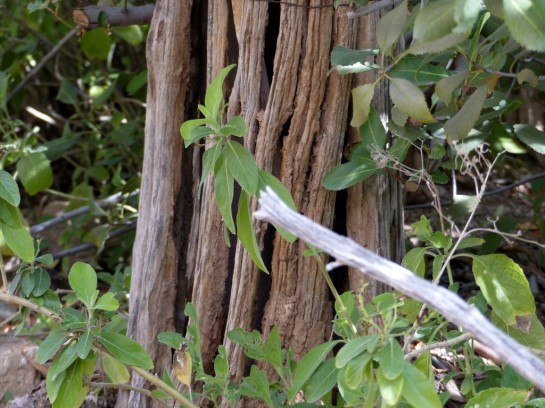 Showing the ribs of a dead Saguaro and a whole where the Woodpecker had its boot. 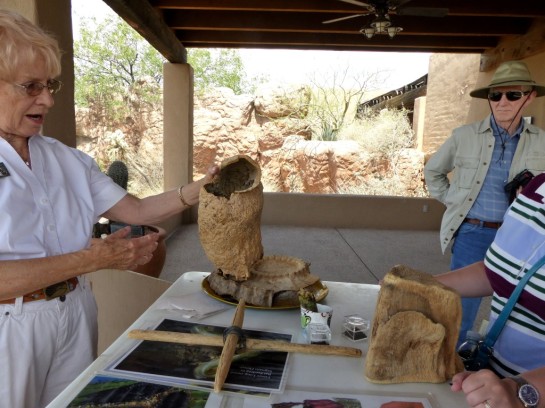 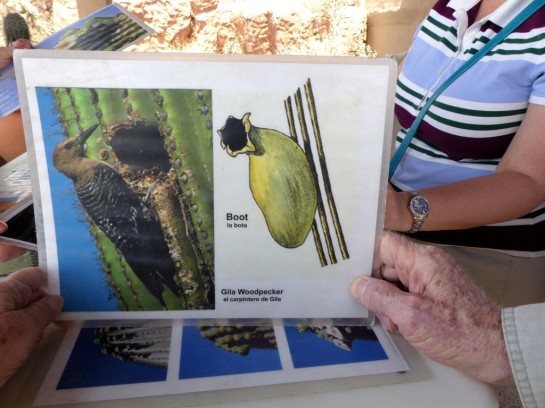 Psalms 33:1-8 NKJV
(1) Rejoice in the LORD, O you righteous! For praise from the upright is beautiful.
(2) Praise the LORD with the harp; Make melody to Him with an instrument of ten strings.
(3) Sing to Him a new song; Play skillfully with a shout of joy.
(4) For the word of the LORD is right, And all His work is done in truth.
(5) He loves righteousness and justice; The earth is full of the goodness of the LORD.
(6) By the word of the LORD the heavens were made, And all the host of them by the breath of His mouth.
(7) He gathers the waters of the sea together as a heap; He lays up the deep in storehouses.
(8) Let all the earth fear the LORD; Let all the inhabitants of the world stand in awe of Him.

By them (springs) the birds of the heavens have their home; They sing among the branches. He waters the hills from His upper chambers; The earth is satisfied with the fruit of Your works. (Psalms 104:12-13 NKJV)

While visiting the Arizona-Sonora Desert Museum, we visited their Hummingbird Aviary. They have four species of hummingbirds flying around in their spacious surroundings. Well, actually, a couple of them were sitting on their nest.

I was excited again to be able to see some of the Lord’s fantastic Hummingbirds. Especially two of the species. I had never seen the Broad-billed or Broad-tailed Hummingbirds before. Thankfully, we saw them again outside the aviary, which enabled me to add those 2 to my Life List of Birds. (264 and counting) 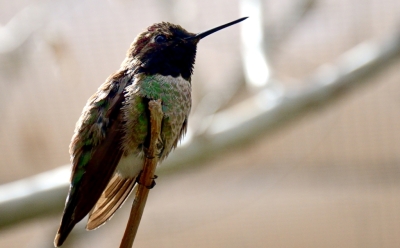 My camera acted up just as we entered the aviary. What disappointment. Thankful, there was a man there with the exact camera as mine and we were able to get it re-adjusted. Apparently I had hit some wrong button and in my frustration, continued to mess it up more. (None of you have ever been frustrated?) In the mean time, the hummers were doing their thing, totally unaware of my problems.

All the birds of the heavens made their nests in its boughs; Under its branches all the beasts of the field brought forth their young; And in its shadow all great nations made their home. (Ezekiel 31:6 NKJV)

I said that to say, I don’t have as many photos to show, because many were tossed. Here are some of the better ones. Unfortunately, I’m not positive of who was who.