McGuffey Readers were a series of graded primers for grade levels 1-6. They were widely used as textbooks in American schools from the mid-19th century to the mid-20th century, and are still used today in some private schools and in homeschooling.

slum’ber my self ‘ re ply’ miss lose

2. Oh, see what you miss when you
slumber so long—
The dewdrops, the beautiful sky!
I can not sing half what you lose in my song;
And yet, not a word in reply.
Wake up, little darling, wake up!

3. I’ve sung myself quite out of patience with you,
While mother bends o’er your dear head;
Now birdie has done all that birdie can do:
Her kisses will wake you instead!
Wake up, little darling, wake up!
George Cooper. 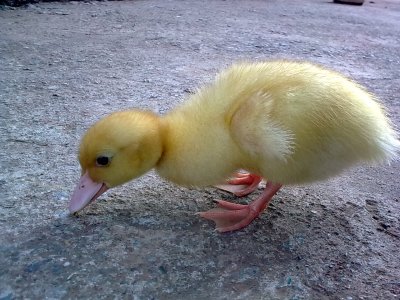 THE AUTOBIOGRAPHY OF A DUCK.
FOUNDED UPON FACT.

“How queer, my child! what a long, broad mouth you have, and what peculiar feet!”

It was my mother, a big brown hen, who spoke. I had stepped from my egg, only a short while before, and as I was the only one hatched out of the whole thirteen, my poor mother was greatly disappointed.

Now, to add to her troubles, there seemed to be something very peculiar about my appearance.

“Yes,” she went on still watching me critically, “I have raised many families, but never a chick like you. Well! well! don’t cry about it. Your yellow dress is very pretty. It doesn’t pay to be too sensitive, as you will find, I am afraid, when you have lived with these chickens. Some of them are dreadfully trying. Dear! dear! how stiff I am! This setting is tiresome work.”

“I wonder what sort of home we are going to have.”

Our home, into which we moved a few hours later, proved to be an upturned soap box. Seven little chickens were there before us.

“The same old story,” said my mother with a knowing air. “People imagine we hens have no sense. I did not hatch those chickens, but I am expected to care for them, as though I did. Some mothers would peck them so they would be glad to stay away.”

She had too good a heart for this, however, and I was very glad to have these brothers and sisters.

They were different from me, though, in many ways, principally, in their dislike for water. They hated even to get their feet wet, while I dearly loved to get in the pond, and swim around on its surface, or even dive down to the bottom, where such nice fat worms lived.

My poor mother never could understand my tastes. The first time she saw me on the water, she came rushing towards me, screaming and beating her wings.

I loved her, and so could not bear to see her distress. It was hard to be different from all the others.

I had a little yellow sister who was a great comfort to me at these times. I could never persuade her to try the water,—but she always sat upon the edge of the pond while I had my swim. We shared everything with each other; even our troubles.

About this time, my voice began to change. It had been a soft little “peep,” but now it grew so harsh, that some of the old hens made unpleasant remarks about it, and my mother was worried.

“It isn’t talking. It’s quacking,” said an old, brown-headed hen who was always complaining of her nerves.

She was very cross and spent most of her time standing on one leg in a corner and pecking any poor chicken that came in her reach.

“Don’t you know why it’s quacking?” asked a stately Buff Cochin who was a stranger in the yard; having arrived only that morning. “That child isn’t a chicken. She’s a duck.”

“What you giving us?” said a dandified Cock, who was busy pluming his feathers. “Whoever heard of a duck?”

“Not you, I daresay,” answered the Buff with a contemptuous sniff. “It’s easy to see you have never been away from this yard. I have traveled, I would have you understand, and I know a duck, too.”

“Well, I don’t care what you call her,” snapped the cross one. “I only hope she’ll keep her voice out of my hearing. The sound of it gives me nervous prostration.” 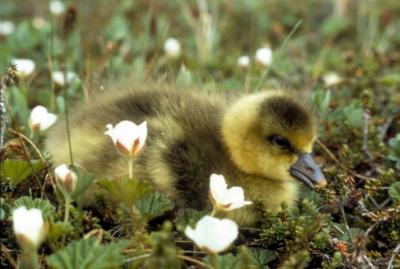 As for poor me,—I stole quietly away, and went up into a corner of the chicken house to cry. I was a duck, alas! and different from all about me. No wonder I was lonely.

My mother asked the cause of my trouble, and when I told her she looked sad and puzzled. “I don’t know what a duck is,” she sighed, “things have been strangely mixed. But cheer up. Whatever comes you are still my child.”

That was indeed a comfort to me. For never had chicken or duck a better mother.

There was consolation also, in what the kind old Buff Cochin told me.

I had nothing to be ashamed of, she said, for ducks were much esteemed by those who knew them.

From her this had more weight, for we all regarded the Buff Cochin as very superior. They were well born, and well bred, and had seen life in many places. Their husband, too, was a thorough gentleman.

However, he also was having his troubles now. He was losing his old feathers, and his new ones were long in coming. Consequently, his appearance was shabby, and he staid away from the hens.

Poor fellow, he looked quite forlorn, leaning up against a sunny corner of the barn, trying to keep warm. I believe he felt the loss of his tail feathers most for the young roosters who strutted by in their fine new coats, made sneering remarks about it.

I was very sorry for him, but my own troubles were getting to be as much as I could bear; for just when I needed a sympathetic mother she was taken from me and her place filled by a big, bare-headed hen as high tempered as she was homely.

“Raising a duck,” she said with a contemptuous sniff at me. “I never supposed I’d come to that. Well, I’ll keep you, but understand one thing, don’t go quacking around me, and don’t bring your wet and mud into the house. I’m not your other mother. My children don’t rule me. I won’t have that Mrs. Redbreast saying my house is dirty. There’s no standing that hen anyhow. I’ll give her my opinion if she puts on her airs around me. There’s too much mixture here. One can’t tell where breed begins or ends.”

It was not many days later, before my mother and Mrs. Redbreast came to words and then blows. The cause was only a worm, but it was enough. Mrs. Redbreast insisted that it was hers. My mother thought otherwise, and with a screech of defiance rushed upon her enemy. Dust and feathers flew. We children withdrew to a safe distance, and with necks stretched watched in fear and trembling.

The fight, though fierce, was short. Our mother was victorious, but she had lost the tail feathers of which she had been so proud, and I am sure she never forgave Mrs. Redbreast.

Like children, chickens and ducks grow older and bigger with the passing days.

In time we were taken from our mothers and put to roost with the older hens and cocks. I was not made to roost so I spent my nights alone in a corner of the chicken house.

It was quieter down there—for up above the chickens all fought for best place, and their cackling and fluttering was disturbing.

The old gentleman was very heavy. Not only was it hard for him to fly up to the roost, but equally hard for him to hold on when once there. Yet I could never persuade him to rest on the floor with me. Like his kind, he preferred the discomfort of sleeping on a pole—a taste I cannot understand. 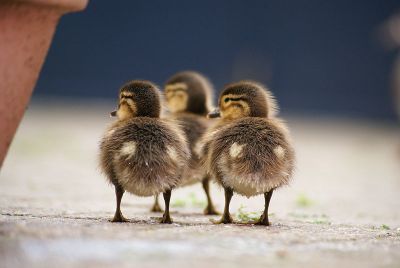 I was four months old before I saw one of my own kind. Then, one day three ducks were brought into the yard. They did not seem to mind being stared at, but fell to eating corn and talking among themselves.

“Horribly greedy,” said Mrs. Redbreast. “I for one don’t care to associate with them.”

“Now you know what you look like, old quacker,” snapped the cross hen, with a peck at me. “My poor nerves will suffer sadly now.”

These unkind remarks scarcely disturbed me, however. There was a new feeling stirring in my heart. I am afraid you will have to be a duck, and live a long time without other ducks, to understand it. Here were companions, whose natures and tastes were like mine, and I was content.

Trust you enjoyed this delightful bird tale about a duck. This was written by Louise Jamison in the Birds and Nature Vol. X, No. 3, Octorber 1901.

Near the end, when our duckling met up with some of her own and made this remark: “Here were companions, whose natures and tastes were like mine, and I was content.” I couldn’t but think of how we as Christian feel a certain bond when we are around like believers.

God is faithful, by whom ye were called unto the fellowship of his Son Jesus Christ our Lord. (1 Corinthians 1:9 KJV)

that which we have seen and heard we proclaim also to you, so that you too may have fellowship with us; and indeed our fellowship is with the Father and with his Son Jesus Christ. (1 John 1:3 ESV)

This is from Gutenberg’s ebooks.