“And the LORD God formed man of the dust of the ground, and breathed into his nostrils the breath of life; and man became a living soul. And the LORD God planted a garden eastward in Eden; and there he put the man whom he had formed. And out of the ground made the LORD God to grow every tree that is pleasant to the sight, and good for food; the tree of life also in the midst of the garden, and the tree of knowledge of good and evil.” (Genesis 2:7-9 KJV)

Avian and Attributes – Creator of The Garden

“When Jesus had spoken these words, he went forth with his disciples over the brook Cedron, where was a garden, into the which he entered, and his disciples. And Judas also, which betrayed him, knew the place: for Jesus ofttimes resorted thither with his disciples.” (John 18:1-2 KJV)

G`ARDEN, n. [Eng. yard, an inclosed place; L. hortus.]
1. A piece of ground appropriated to the cultivation of herbs, or plants, fruits and flowers; usually near a mansion-house. Land appropriated to the raising of culinary herbs and roots for domestic use, is called a kitchen-garden; that appropriated to flowers and shrubs is called a flower garden; and that to fruits, is called a fruit garden. But these uses are sometimes blended.
2. A rich, well cultivated spot or tract of country; a delightful spot. The intervals on the river Connecticut are all a garden. Lombardy is the garden of Italy.
Garden, in composition, is used adjectively, as garden-mold, a rich fine mold or soil; garden-tillage,the tillage used in cultivating gardens.
G`ARDEN, v.i. To layout and to cultivate a garden; to prepare ground to plant and till it, for the purpose of producing plants, shrubs, flowers and fruits.

“Now in the place where he was crucified there was a garden; and in the garden a new sepulchre, wherein was never man yet laid. There laid they Jesus therefore because of the Jews’ preparation day; for the sepulchre was nigh at hand.” (John 19:41-42 KJV) 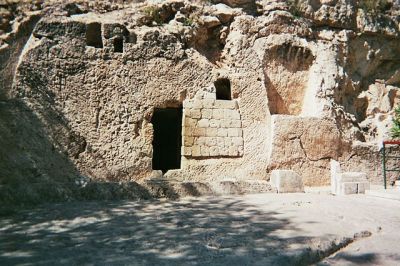 Jerusalem Tomb of the Garden ©WikiC

The Garden Emerald (Chlorostilbon assimilis) is a small hummingbird that is an endemic resident breeder in Costa Rica and western Panama. It was formerly considered to be a subspecies of the blue-tailed emerald. This is a species of open habitats, including bushy savanna, clearings, cultivation, and gardens. It can be found in the Pacific lowlands and hills, locally up to an elevation of 1500 m.

The nest is a neat cup of plant fibres decorated on the outside with bark fragments. The two white eggs are incubated by the female alone.

The garden emerald is 8 cm long and weighs 2.6 g. The male has bronze-green upper parts, brilliant green under parts, white thighs and a deeply forked tail. The female has grey underparts, a white stripe behind the eye and dusky ear patches. She has white tips to her tail, which lacks the deep fork of the male. Young birds resemble the adult female, but have some buff feather tips.
Garden Warbler (Sylvia borin)

The Garden Warbler (Sylvia borin)  is a common and widespread small bird that breeds in most of Europe and in western Asia. It is a plain, long-winged and long-tailed typical warbler with brown upperparts and dull white underparts; the sexes are similar and juveniles resemble the adults. Its two subspecies differ only slightly and interbreed where their ranges overlap. Due to its lack of distinguishing features, this species can be confused with a number of other unstreaked warblers. The garden warbler’s rich melodic song is similar to that of the blackcap, its closest relative, which competes with it for territory when nesting in the same woodland.

The preferred breeding habitat in Eurasia is open woodland with dense low cover for nesting; despite its name, gardens are rarely occupied by this small passerine bird. The clutch of four or five blotched cream or white eggs is laid in a robust cup-shaped nest built near the ground and concealed by dense vegetation. The eggs are incubated for 11–12 days. The chicks are altricial, hatching naked and with closed eyes, and are fed by both parents. They fledge about 10 days after hatching.

Birds in Hymns – In The Garden

Birds in Hymns – The Garden of My Heart

And out of the ground the Lord God formed every [wild] beast and living creature of the field and every bird of the air and brought them to Adam to see what he would call them; and whatever Adam called every living creature, that was its name. (Genesis 2:19 AMP)