“And said, O my God, I am ashamed and blush to lift up my face to thee, my God: for our iniquities are increased over our head, and our trespass is grown up unto the heavens.” (Ezra 9:6 KJV)

“The male Lance-tailed Manakin has an interesting breeding display, unusual in that it is cooperative rather than competitive. Two males perch next to each other on a bare stick and jump up and down alternately, sometimes giving short flights. Groups of birds may perform together, with a different stick for each pair of displaying males. The female builds a cup nest in a tree; two brown-mottled cream eggs are laid, and incubated entirely by the female for about 20 days.

The lance-tailed manakin has a number of calls, including a Toe-LEE-do, a curry-ho, and a frog-like buzzing croak given by displaying males. These manakins eat fruit and some insects. (Wikipedia) 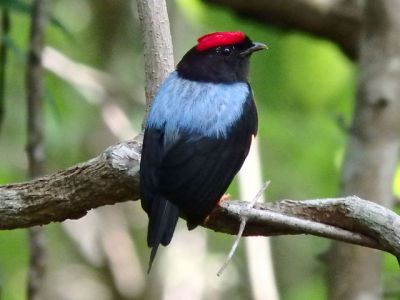 On the small Panamanian island of Boca Brava, male Lance-tailed Manakins are beginning to compete for mates—which they do by working together. You’ll have a front row seat when you watch our live cam.

The Cornell Lab has partnered with Dr. Emily DuVal to bring this live view of manakins to your screen. She has been studying these cooperative displays since 1999, unraveling the mystery of why males form alliances and work together to woo females—even though only one male typically gets to mate.

Here’s what to look for: The live cam shows a display perch used by one pair of males, within a larger area with up to 30 “alpha” males and their partners. Throughout the day, the males perform coordinated displays featuring leaps and butterfly-like flights on the display perch. Occasionally, a brownish female stops by to watch. If she seems interested and receptive, the beta male typically leaves the area and the alpha male starts displaying on his own.

Through much of the day the perch may appear empty; but you can often hear the sweet calls of the male manakins singing a duet, trying to entice a female to check out one of their meticulously maintained display perches (they also have two other display areas off-cam). When the manakins aren’t around, other species (like this antshrike, this wren, or even this wood-rail!) may wander into the frame, and in the mornings and evenings the roaring of howler monkeys echoes through the forest.

You also might want to watch the other videos listed on the Live Came site. Especially the Great Courtship Display and Dance by Alpha/Beta Male Pair 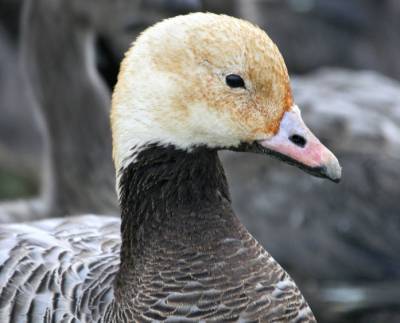 “I know that, whatsoever God doeth, it shall be for ever: nothing can be put to it, nor any thing taken from it: and God doeth it, that men should fear before him.” (Ecclesiastes 3:14 KJV)

All the pages and links (as far as I know) are correctly updated to the newest version of world bird names. A few of the changes were mentioned in Update to the Birds of the World,6.3. Here are some more of those changes and additions.

The Snow Goose, Ross’s Goose and the Emperor Goose had their genus changed from Chen to Anser. The Emperor Goose also had a gender name change from canagica to canagicus. There were several other birds that had those kind of changes:

The Manakins had a huge change. Not only did they change the genera, but they also reshuffled the Pipridae – Manakins Family around. Here are those genera changes:

They added these new species and deleted the Coot with this update:

Birds of the World contain Lee’s Birds of the World, based on the IOC World Bird List 6.3 contains 10,659 extant species (and 155 extinct species)  classified in 40 Orders,  238 Families (plus 2 Incertae Sedis) and 2292 Genera and 20,413 Subspecies.  All the ORDERs and the Families are listed. Please enjoy looking around at the references to the numerous birds that the Lord has created.

Update to the Birds of the World,6.3

And God created great whales, and every living creature that moveth, which the waters brought forth abundantly, after their kind, and every winged fowl after his kind: and God saw that it was good. And God blessed them, saying, Be fruitful, and multiply, and fill the waters in the seas, and let fowl multiply in the earth. (Genesis 1:21-22 KJV)

I came across a couple of videos of Blue Manakins doing what they were commanded to do by the Lord, by multiplying. Well, to do this, they have to attract the females. There are many birds that use the method of the displaying at a lek. The noun, “lek“, is “a traditional place where males assemble during the mating season and available engage in competitive displays that attract females.” The verb, “lekked, lekking” is defined as, “a male to assemble in a lek and engage in competitive displays.” (definitions from Dictionary.com) 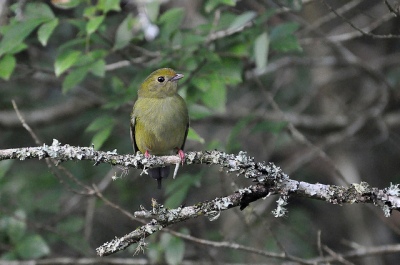 The Blue Manakins (Chiroxphia caudata) are members of the Manakins – Pipridae Family. They were previously called the Swallow-tailed Manakin. They are found “in north-eastern Argentina, southern and south-eastern Brazil, and Paraguay. Its typical habitat is wet lowland or montane forest and heavily degraded former forest. Males have a bright blue body, black head wings and tail and a red crown. Females and juveniles are olive-green. At breeding time, males are involved in lekking behaviour when they sing and dance to impress females.” (Wikipedia)

Not the clearest, but it is difficult in a jungle to video:

Now for the clearest  of all: 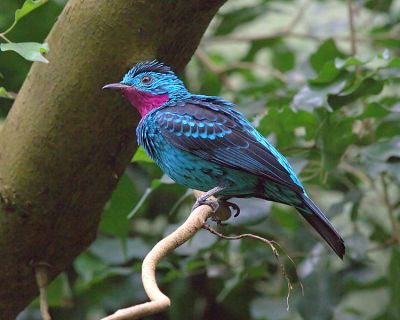 To the end that my glory may sing praise to thee, and not be silent. O LORD my God, I will give thanks unto thee for ever. (Psalms 30:12 KJV)

As we continue through the Passerine Families, today we arrive at Cotingidae – Cotingas Family which has 66 members and the Pipridae – Manakins Family has 52 species.

As you watch the birds you can listen to Mark Quijano sing “Give Thanks.” Mark is a newer follower of this blog and I am following his, now that we have been made aware of the each other’s blog. Our mutual draw is Our Lord Jesus Christ. I find the Lord’s Family enjoyable, wherever they may be. Mark lives in Saga City, Japan. Please check out his site “Travel Diary.”

If you have a large screen, you can do both at the same time, else, watch the birds as you listen to Mark. Or you can watch Mark sing and then start it again and listen as you watch the birds. Oh, the options I have given you today to enjoy Our Lord’s Creation and “Give Thanks” through music and birds.

“Give Thanks” ~ sung by Mark Quijano, his YouTube Channel 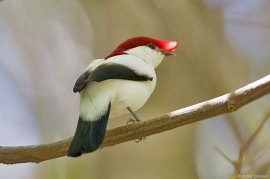 The Araripe Manakin is endemic to a very small ribbon of forest at the foot of the Chapada do Araripe escarpment, in Brazil…

The survival of these birds depends upon the availability of water resources..

Have we ever felt that our survival also depends upon JESUS, the LIVING WATER?

Unfortunately, this supply of water also generates the biggest threat to the species as the area is a bit of an oasis in that region, and the supply of water has led to the development of both agriculture and recreational facilities…

Many of us are dry in spirit, but, instead of looking up to the Pillar of Clouds to wet our spirit,
where are we looking?

Found along the slopes of the chapada (plateau) in the lower and middle stories of tall forests where there are plenty of vines, as well as clearings…

It is associated with water springs and is therefore a good indicator of environmental quality..

If we live on JESUS, THE VINE, the world would look at us as an indicator of the spiritual quality of the church….

For I will pour water upon him that is thirsty, and streams upon the dry ground; I will pour my Spirit upon thy seed, and my blessing upon thine offspring: (Isaiah 44:3)

The Araripe Manakin is in the Pipridae Family of the Passeriformes Order.