Jesus said: “Therefore I say to you, do not worry about your life, what you will eat or what you will drink . . . Is not life more than food, and the body more than clothing? Look at the birds of the air, . . . your heavenly Father feeds them. Are you not of more value than they?”   (Matthew 6:25-26)

For welcoming in the year of our Lord 2020,  below follows the fifth advance installment of alphabet-illustrating birds of the world, as part of this new series (“Birds Are Wonderful  —  and Some Are a Little Weird“*).  The letter M is illustrated by Magpies, Magnificent Frigatebird, and Motmots.  The letter N  illustrated by Nightingale, Needle-billed Hermit, and Nighthawk (also called “Nightjar”).  The letter O illustrated by Osprey, Oriental Stork, and Oystercatcher. 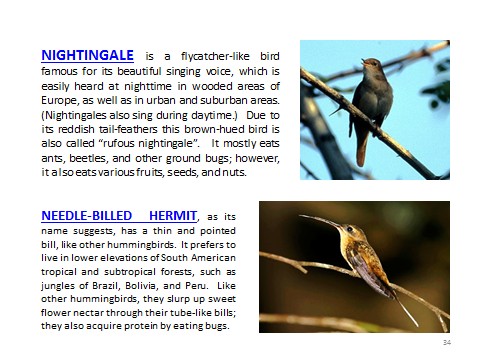 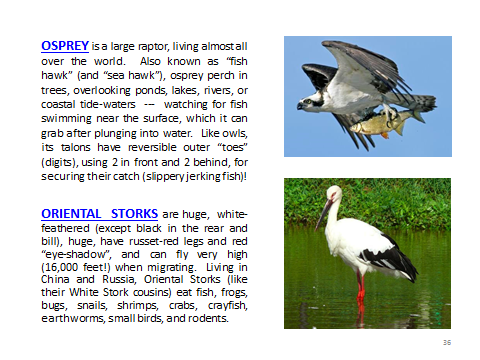 Birds are truly wonderful — and some, like the “egg-dumping” Oystercatcher, are a little bit odd, if not also weird!  (Stay tuned for more, D.v.) 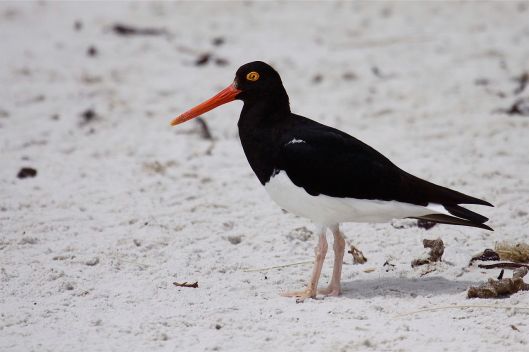 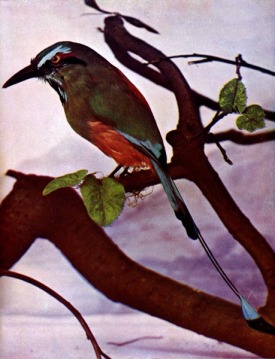 OT MOTS are peculiar to the new world, being found from Mexico throughout the whole of Central America and the South American continent. The general plumage is green, and the majority of the species have a large racket at the end of the center tail feathers, formed by the bird itself.

The Houton, (so called from his note,) according to Waterson, ranks high in beauty among the birds of Demerara. This beautiful creature seems to suppose that its beauty can be increased by trimming its tail, which undergoes the same operation as one’s hair in a barber shop, using its own beak, which is serrated, in lieu of a pair of scissors. As soon as its tail is fully grown, he begins about an inch from the extremity of the two longest feathers in it and cuts away the web on both sides of the shaft, making a gap about an inch long. Both male and female wear their tails in this manner, which gives them a remarkable appearance among all other birds.

To observe this bird in his native haunts, one must be in the forest at dawn. He shuns the society of man. The thick and gloomy forests are preferred by the Houton. In those far extending wilds, about day-break, you hear him call in distinct and melancholy tone, “Houton, Houton!” An observer says, “Move cautiously to the place from which the sound proceeds, and you will see him sitting in the underwood, about a couple of yards from the ground, his tail moving up and down every time he articulates “Houton!”.”

The Mot Mot lives on insects and berries found among the underwood, and very rarely is seen in the lofty trees. He makes no nest, but rears his young in a hole in the sand, generally on the side of a hill.

Mr. Osbert Salvin tells this curious anecdote: “Some years ago the Zoological Society possessed a specimen which lived in one of the large cages of the parrot house by itself. I have a very distinct recollection of the bird, for I used every time I saw it to cheer it up a bit by whistling such of its notes as I had picked up in the forests of America. The bird always seemed to appreciate this attention, for although it never replied, it became at once animated, hopped about the cage, and swung its tail from side to side like the pendulum of a clock. For a long time its tail had perfect spatules, but toward the end of its life I noticed that the median feathers were no longer trimmed with such precision, and on looking at its beak I noticed that from some cause or other it did not close properly, gaped slightly at the tip, and had thus become unfitted for removing the vanes of the feathers.”

By them shall the fowls of the heaven have their habitation, which sing among the branches. (Psalms 104:12 KJV)

Here is a nice video of a Turquoise-browed Motmot from IBC. What a neat family of birds the Motmot – Momotidae’s contains. There are 14 fantastically created birds species of Motmots in 6 Genus. Our Turquoise-browed is the only one in the Eumomota genus, but at present their are 7 supspecies.

“The bird is approximately 13 in (4 cm) long and weighs about 1.2 oz (65 gr). It has a mostly green body with a rufous back and belly. There is a bright blue stripe above the eye and a blue-bordered black patch on the throat. The flight feathers and upperside of the tail are blue. The tips of the tail feathers are shaped like rackets and the bare feather shafts are longer than in other motmots. Although it is often said that motmots pluck the barbs off their tail to create the racketed shape, this is not true; the barbs are weakly attached and fall off due to abrasion with substrates and with routine preening.

Unlike most bird species, where only males express elaborate traits, the Turquoise-browed Motmot expresses the extraordinary racketed tail in both sexes. Research indicates that the tail functions differently for the sexes. Males apparently use their tail as a mating signal, as males with longer tails have greater pairing success and reproductive success. In addition to this function, the tail is used by both sexes in a wag-display, whereby the tail is moved back-and-forth in a pendulous fashion. The wag-display is performed in a context unrelated to mating: both sexes perform the wag-display in the presence of a predator, and the display is thought to confer naturally selected benefits by communicating to the predator that it has been seen and that pursuit will not result in capture. This form of interspecific communication is referred to as a pursuit-deterrent signal.” (Wikipedia-edited)

Previous Article – The Red Headed Woodpecker and The Drummer Bird

Beside them the birds of the heavens dwell; they sing among the branches. (Psalms 104:12 ESV)

Two of our church members, a pastor and his helper, have gone on a two week trip to assist and train preachers down there. So, here is a survey of some of the birds in those countries that they might encounter. Just the trip on the Amazon should give them some interesting views of our feathered friends. Let’s see what we can discover:

Since there are so many to consider, see the numbers below, I have picked out some of the most interesting (at least to me) that you might enjoy seeing God’s Designing Hand at work. To start off, there is the Potoo – Nyctibiidae Family, which is related to nightjars and frogmouths (Whip-poor-will or Chuck-will’s-widow). They are nocturnal and hunt insects, but lack the bristles around the mouth. What is so neat about these is how they appear in the daytime. They sit on branches and look like the bark or a stump. Peru has the Great, Long-tailed, Common, Andean, White-winged and Rufous Potoo. See an article about them and their Family page.

Another interesting set of birds they could encounter would be ones from the Sulidae Family which Peru has; the Blue-footed, Peruvian, Masked, Nazca, Red-footed and Brown Booby. Chile has those minus the Red-footed Booby. The family also include the Cape Gannet found in Peru. We did an article about the Blue-footed Booby.

Our team may also get a chance to spot the beautiful Sunbittern while in Peru. See Birds of the Bible – Sunbittern. They could also see the “The Stinker” or Hoatzin  and the Oilbird also in Peru.

Of the 14 Motmots in the Momotidae Family, 5 of them can be found in Peru, but none in Chile. The Whooping, Amazonian, Andean, Rufous and the Broad-billed Motmots live in Peru.

The Cotingas – Cotingidae Family has 30 species in Peru and 1 in Chile. Some articles about them are:
The Pompadour Cotinga – Concealed incubators…

The Cotingas in Peru are the Red-crested, Chestnut-crested, White-cheeked, Bay-vented, Black-necked Red, Plum-throated, Purple-breasted, Spangled, Black-faced, Purple-throated, Pompadour. Chile only has the Rufous-tailed Plantcutter and Peru has the Peruvian Plantcutter. Peru also has 8 Fruiteaters, 2 Fruitcrows, 4 Pihas and the Andean Cock-of-the-rock.