“Honk…honk…honk!” Before you ever see the birds’ characteristic black heads and white cheek patches, you identify Canada Geese coming as they honk across the sky in their typical V-shaped pattern. It seems Canada Geese are always vocal; on the ground, in the air, while feeding, when waking up, just before they sleep… they are always honking.

So that begs the question: what are they honking about? What are they saying? Biologists tell us they honk to keep family groups together; they honk to communicate rest or feeding areas; they honk to alert others of danger or predators; or, especially the younger birds, they just “go off with a jag of honking that seems to serve no other purpose than sheer exuberance – the expression of joy and excitement over the ability to fly with their friends and family.”

Birds face many hazards during migration. Facing often severe weather and high winds, some may get blown off course or get caught in a storm. Inexperienced birds may chart a wrong course and fatally collide with tall buildings, windows, and other structures, or risk being shot by hunters. It is during the hardships of migration that honking becomes so important to Canada Geese. The blinding snow and rain, or thick fog, may make it impossible to see one another. So, as they toil through the sky, they honk to keep their flock together.

The geese are talking to one another. Each is saying to its companions, ‘Here am I… where are you? Here am I… where are you?’ Aloft in storm and cloud, the voices hold the flock together. They speak out loudly against wind and distance so that others of their kind, strayed or lost, may know the way. Under fair sky the calls continue for reassurance and to reassure. ‘Come along, do not tire. We are on the right course and will soon stop for rest.’ It is no fable, but a truth of nature; experienced elders lead the way.

The experienced elder goose is leading the way with his honking, while the others follow honking encouragement to the others to keep to the course and not quit the flight. The grounded geese that left the flock because of weariness or injury can hear the incessant calling, “Here am I… where are you?” and rejoin their migrating families. It is the duty of those still in flight and on course to call out to their lost and weary relations to come back and return to the path.

Calling Out to Others

In life, many people around us may fly the wrong course or succumb to the hazards of life: failure and defeat, drugs and alcohol, apathy or crime. We have a duty to our fellow man to fly the right course and to lead them in a safe direction. We are to be leaders in our schools, on our jobs, in our families. We have a duty to not leave behind the weak and weary, and to help others to the safe places of rest and success that have been shown to us.

As Christians, we all have a duty to “honk” as the Canada Goose: “Here am I…where are you?” There are many – family members, friends, coworkers, schoolmates – that are lost and on the wrong course. They will never find the right course and follow Jesus if we, the ones that know the right path, don’t call out to them to follow.

The New Living Translation of Romans 10:14 states, “But how can they call on him to save them unless they believe in him? And how can they believe in him if they have never heard about him? And how can they hear about him unless someone tells them?” If we remain silent, they will never find the way. Our constant, clear call of “Here am I…where are you? Here Am I…where are You?” makes it ever known to them to where they can return when they tire of the life of sin. ​

Before you can lead others and call “Here am I…”, do you know where you are heading? Are you on the narrow path that leads to life? If not, follow the voice of the Savior who “calls you out of darkness into His wonderful life” (I Peter 2:9). And if you do know the course, never quit your duty of calling out to those who are lost or weary. Like the geese that seem to never quit honking, so should you never cease making the call: “Here am I…where are you?  Here am I…where are you?”

Hi, I’m wildlife photographer and nature writer William Wise. I was saved under a campus ministry while studying wildlife biology at the University of Georgia. My love of the outdoors quickly turned into a love for the Creator and His works. I’m currently an animal shelter director and live in Athens, Georgia with my wife and two teenage daughters, who are all also actively involved in ministry. Creation Speaks is my teaching ministry that glorifies our Creator and teaches the truth of creation. I am also a guest author at Lee’s Birdwatching Adventures and The Creation Club. — “What a wildly wonderful world, God! You made it all, with Wisdom at Your side, made earth overflow with your wonderful creations.” Psalms 104, The Message.

“This I recall to my mind, therefore have I hope. It is of the LORD’S mercies that we are not consumed, because his compassions fail not. They are new every morning: great is thy faithfulness.” (Lamentations 3:21-23 KJV)

Geese Flying Early in the Morning ©© 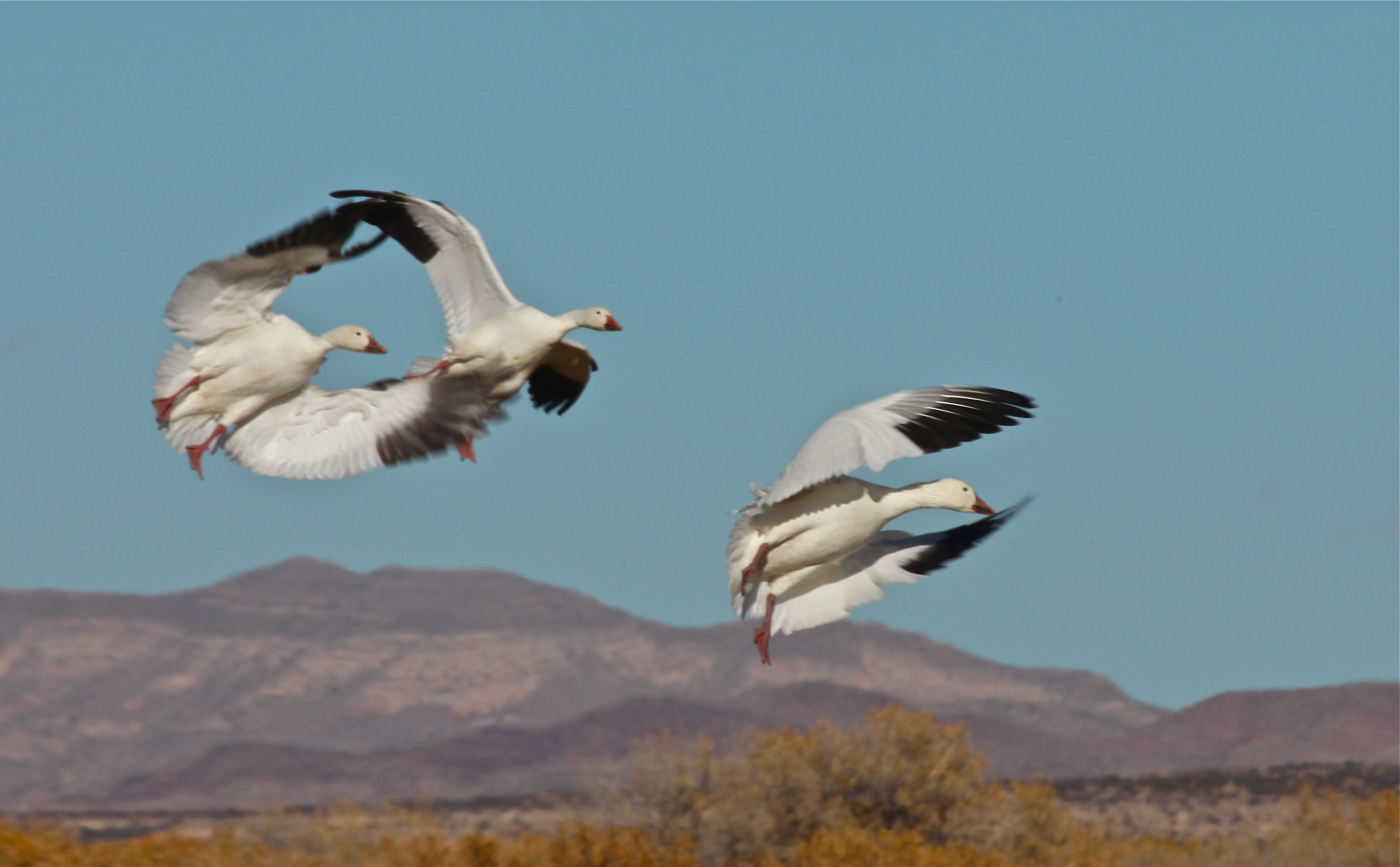 SURELY WE WILL RETURN WITH THEE

“And they said unto her, Surely we will return with thee unto thy people.”  (Ruth 1:10)

In Zoo Miami’s Wings of Asia – Wow! – I our trip their was introduced. Now to continue with our adventure there. I am still sorting photos, but I have most of the water birds figured out.

First, here are two quotes about the aviary from Zoo Miami’s website. “Brilliantly colored pheasants, hornbills, pigeons and many other birds show off their shimmering, iridescent plumage in a large, lush free-flight enclosure that provides them with unencumbered flight. Tiny and large birds swoop overhead, perch on branches and even strut and stroll right by visitors. The air is alive with bird activity, beautiful birdsongs, trickling brooks and waterfalls.” They said that so much better than I could, but it is so true.

“The bird collection is quite diverse with rare, colorful species that sing attractive songs and make unusual vocalizations. Some of the birds are cranes, rails, mynahs, parrots, pheasants, thrushes, fruit-pigeons, barbets and woodpeckers. The birds, vastly different in size, range from 10-gram (.35 oz) Japanese white-eyes to 7000-gram (15.4 lb) sarus cranes…  Many of these species are rare in zoo collections, and some can only be seen at Zoo Miami as part of our participation in wildlife conservation breeding initiatives such as the Species Survival Program.”

Strut some of them do! I’ll save the cranes for another article, but the Ruddy and Raja Shelducks were strolling all around. The Plumed Whistling Duck was checking out the entry door. Maybe looking for a way out or to see if the next visitors were on the way. Why would he want to leave such a fantastic surrounding?

Just in the Anatidae – Ducks, Geese & Swans Family there were 18 species that we were able to see and photograph. In addition there were 6 members of that family we found around the zoo (Amazon & Beyond and Cloud Forrest). Some we have seen previously, but most were ones not seen by us. Here is a list of those with a link to a photo and a slide show at the bottom. I am starting with these because they are the some of the first you encounter when you enter the aviary. By wandering around on the paths you actually arrive at three different heights with different bird species hanging out. More on that later.

The Bar-headed Goose’s picture was selected because of its behavior. I am featuring it because the Bar-headed Goose is thought to be one of the world’s highest flying birds, having been heard flying across Mount Makalu (the fifth highest mountain on earth at 8,481 metres (27,825 ft)) and apparently seen over Mount Everest (8,848 metres (29,029 ft), although this is a second hand report). This incredibly demanding migration has long puzzled physiologists and naturalists: “there must be a good explanation for why the birds fly to the extreme altitudes […] particularly since there are passes through the Himalaya at lower altitudes, and which are used by other migrating bird species” quoted from Black & Tenney (1980). In fact bar-headed geese is now believed that they do take the high passes through the mountains. The challenging northward migration from lowland India to breed in the summer on the Tibetan Plateau is undertaken in stages, with the flight across the Himalaya (from sea-level) being undertaken non-stop in as little as seven hours. Surprisingly, despite predictable tail winds that blow up the Himalayas (in the same direction of travel as the geese), bar-headed geese spurn these winds, waiting for them to die down overnight, when they then undertake the greatest rates of climbing flight ever recorded for a bird, and sustain these climbs rates for hours on end.

The Bar-headed Goose is known to be well equipped for this incredibly challenging migration. It has a slightly larger wing area for its weight than other geese, which is believed to help the goose fly at high altitudes. Studies have found that they breathe more deeply and efficiently under low oxygen conditions. The haemoglobin of their blood has a higher oxygen affinity than that of other geese. Again we see a well designed avian creation by its Creator. The Lord knew the conditions and heights it would need to cross to reach the feeding grounds provided for it.

Also, to every beast of the earth, to every bird of the air, and to everything that creeps on the earth, in which there is life, I have given every green herb for food”; and it was so. (Genesis 1:30 NKJV)

The Bar-headed Goose migrates over the Himalayas to spend the winter in parts of India (from Assam to as far south as Tamil Nadu. The winter habitat of the Bar-headed Goose is cultivated fields, where it feeds on barley, rice and wheat, and may damage crops. Birds from Kyrgyzstan have been noted to stopover in western Tibet and southern Tajikistan for 20 to 30 days before migrating further south. Some birds may show high wintering site fidelity.

The bird is pale grey and is easily distinguished from any of the other grey geese of the genus Anser by the black bars on its head. It is also much paler than the other geese in this genus. In flight, its call is a typical goose honking. The adult is 71–76 centimetres (28–30 in) and weighs 1.87–3.2 kilograms (4.1–7.1 lb). (Wikipedia)

One more tale to tell. The Common Merganser had just eaten and he started flipping his feet like crazy. He was splashing water everywhere. I suppose he was happy. I finally turned the video on and caught part of it. He even chased the White-headed Duck around.

The name in (parenthesis) at the front is the name the zoo uses. I use the I.O.C. World Bird Names here on the blog. These are in taxonomic order.

I received an interesting e-mail from a friend and decided to post it. Checking out how to do it, I found it already posted on slideshare. Hope you enjoy it.

Web-footed and water-loving, this large, diverse, and gregarious group of birds is a favorite of birders and nonbirders alike.

Back to the Peterson Field Guide Video Series
“Ducks, Geese, Swans” Video is from petersonfieldguides at YouTube

Birds of the Bible – Swan