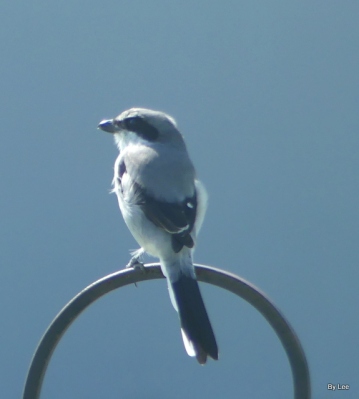 On June 3rd, 4th, and 5th, the birds visiting the yard slowed down. On Thursday the 3rd, a White Ibis, the normal four Pekins, a female Anhinga and a Boat-tailed Grackle wandered around, and a Great Egret flew by. Friday, the 4th was even slower with only the female Anhinga, Muscovy, the four Pekins, the White Ibis and two Sandhill Cranes strutting around.

Yesterday was even less entertaining with the Pekins, Boat-tailed Grackle, and the Loggerhead Shrike. The Shrike was gathering grass and flying across the pond to a tree. We actually spotted a second Shrike. Wonder if they are making a nest. That would be blessing to see baby Shrikes later on. Today is Sunday and we really didn’t spend much time at breakfast.

Isn’t it just like the birds to slow down their morning visits when I decide to start a new series. We have gotten some rain finally in the last few days, and maybe the worms have come up for air. The birds may busy catching them instead of coming by here. Oh, well. Stay tuned!

How cool is it that the same God who created mountains and oceans and galaxies thought the world needed one of you too!

A good example has twice the value of good advice.

“He has shown you, O man, what is good; And what does the LORD require of you But to do justly, To love mercy, And to walk humbly with your God?” (Micah 6:8 NKJV)
“For I have given you an example, that you should do as I have done to you. Most assuredly, I say to you, a servant is not greater than his master; nor is he who is sent greater than he who sent him. If you know these things, blessed are you if you do them.” (John 13:15-17 NKJV)

A couple more great Church Signs and Verses. There are some challenges here for us to consider.

“For as the heaven is high above the earth, so great is his mercy toward them that fear him. As far as the east is from the west, so far hath he removed our transgressions from us.” (Psalms 103:11-12 KJV)

“But God, who is rich in mercy, for his great love wherewith he loved us,” (Ephesians 2:4 KJV)

MER’CY, n. [L. misericordia.]
1. That benevolence, mildness or tenderness of heart which disposes a person to overlook injuries, or to treat an offender better than he deserves; the disposition that tempers justice, and induces an injured person to forgive trespasses and injuries, and to forbear punishment, or inflict less than law or justice will warrant. In this sense, there is perhaps no word in our language precisely synonymous with mercy. That which comes nearest to it is grace. It implies benevolence, tenderness, mildness, pity or compassion, and clemency, but exercised only towards offenders. Mercy is a distinguishing attribute of the Supreme Being.
The Lord is long-suffering and of great mercy, forgiving iniquity and transgression, and by no means clearing the guilty. Num 14.

2. An act or exercise of mercy or favor. It is a mercy that they escaped.
I am not worthy of the least of all thy mercies. Gen 32.

3. Pity; compassion manifested towards a person in distress.
And he said, he that showed mercy on him. Luke 10.

4. Clemency and bounty.
Mercy and truth preserve the king; and his throne is upheld by mercy. Prov 28.

5. Charity, or the duties of charity and benevolence.
I will have mercy and not sacrifice. Mat 9.

8. Pardon.
I cry thee mercy with all my heart.

9. The act of sparing, or the forbearance of a violent act expected. The prisoner cried for mercy.
To be or to lie at the mercy of, to have no means of self-defense, but to be dependent for safety on the mercy or compassion of another, or in the power of that which is irresistible; as, to be at the mercy of a foe, or of the waves.

“If we could remember that the divine mercy is not a temporary mood but an attribute of God’s eternal being, we would no longer fear that it will someday cease to be. Mercy never began to be, but from eternity was; so it will never cease to be. It will never be more since it is itself infinite; and it will never be less because the infinite cannot suffer diminution.” A. W. Tozer, (Knowledge of the Holy, p.91)

The Chestnut-breasted Malkoha (Phaenicophaeus curvirostris) is a species of cuckoo in the family Cuculidae. Found in Southeast Asia from Myanmar through to eastern Java, the Philippines and Borneo, it is a large cuckoo measuring up to 49 cm (19 in) with grey and dark green upperparts and chestnut underparts, and a large curved pale upper mandible. The male and female are similar in plumage. Unlike many cuckoos, it builds its nest and raises its own young.

Birds of the Bible – Chestnut-breasted Malkoha

WOULD SWALLOW ME UP

“He shall send from heaven, and save me from the reproach of him that would swallow me up. Selah. God shall send forth his mercy and his truth.” (Psalms 57:3 KJV)

HIS HORN BE EXALTED

“But my faithfulness and my mercy shall be with him: and in my name shall his horn be exalted.” (Psalms 89:24 KJV)

“With a strong hand, and with a stretched out arm: for his mercy endureth for ever.” (Psalms 136:12 KJV)

AND THE SPIES SAW

“And the spies saw a man come forth out of the city, and they said unto him, Shew us, we pray thee, the entrance into the city, and we will shew thee mercy.” (Judges 1:24)

And when they had come to the place called Calvary, there they crucified Him, and the criminals, one on the right hand and the other on the left. (Luke 23:33 NKJV)

Today’s birds were chosen because of the words of the Hymn, “At Calvary.” Because of Jesus’ Love at Calvary, through His Grace, Mercy, and Love, “Now my raptured soul can only sing Of Calvary.”

(Some of the birds have “merci or merce” in their scientific name.)

Grace, mercy, and peace will be with you from God the Father and from the Lord Jesus Christ, the Son of the Father, in truth and love. (2 John 1:3 NKJV)

Years I spent in vanity and pride,
Caring not my Lord was crucified,
Knowing not it was for me He died
On Calvary.

Mercy there was great, and grace was free;
Pardon there was multiplied to me;
There my burdened soul found liberty,
At Calvary.

By God’s Word at last my sin I learned;
Then I trembled at the law I’d spurned,
Till my guilty soul imploring turned
To Calvary.

Now I’ve giv’n to Jesus everything,
Now I gladly own Him as my King,
Now my raptured soul can only sing
Of Calvary.

Oh, the love that drew salvation’s plan!
Oh, the grace that brought it down to man!
Oh, the mighty gulf that God did span
At Calvary!