While posting Emma Foster’s latest tale about birds, the Greater Necklaced Laughingthrush (Garrulax pectoralis) was used. I picked this bird because of the “necklaced” part of its name. Where actually do they live and what can we find out about them?

I have always enjoyed the Laughingthrush every since we saw the ones in Zoo Miami’s Aviary. 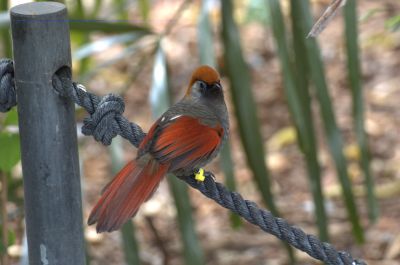 Red-tailed Laughingthrush by Dan at Wings of Asia Zoo Miami

The Greater Necklaced Laughingthrush doesn’t have much written about it in Wikipedia. Here is their information:

The Greater Necklaced Laughingthrush (Pterorhinus pectoralis) is a species of passerine bird in the family Leiothrichidae. It is found in Bangladesh, Bhutan, China, India, Laos, Myanmar, Nepal, Thailand and Vietnam. It is introduced to the United States. Its natural habitats are subtropical or tropical moist lowland forest and subtropical or tropical moist montane forest.

This species was formerly placed in the genus Garrulax but following the publication of a comprehensive molecular phylogenetic study in 2018, it was moved to the resurrected genus Pterorhinus.

The Handbook of Birds of the World gives us a few more facts:

Here is how The Guardian describes this bird:

The Greater Necklaced Laughingthrush is a member of a large family of passerines known as the the Old World babblers (Timaliidae). This family is quite diverse in size and coloration, but are characterised by soft fluffy plumage — a really lame way to classify them, in my opinion, since there’s a LOT of passerines with “soft fluffy plumage” that are not included in this taxonomic family. Ho-hum.

One weird fact: the American wrentit was recently placed into the Old World babblers but that enigmatic species probably doesn’t belong there.

Another weird fact: there are two groups of birds in the world that are known as “babblers”: the timaliids are one and the other is the (unrelated) Australasian babblers of the family, Pomatostomidae. The pomatostomids are now sometimes known as the pseudo-babblers, because they deceived naturalists, ornithologists and birders for so bloody long.

From the The Guardian.com

Video of the Greater Necklaced Laughingthrushes of Bann Song Nok, south of Bangkok. By Wazooland

Just found a great link for the Greater Necklaced Laughingthrush

Okay, so what about these Lesser Necklaced? They look so similar that you really need to look hard to distinguish them. Look real close, and then notice the color of the eyes. Which is which? Lesser has a yellow eye and the greater has a black eye. Oh, and the “necklace” is supposed to be narrower. It is hard to tell that. The “ear covert markings” help, but those eyes are the clincher! 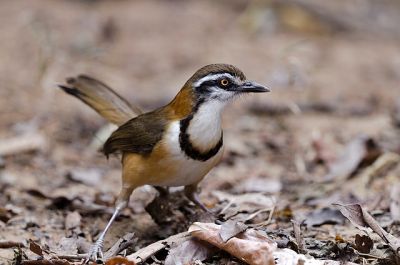 “They came, both men and women, as many as had a willing heart, and brought earrings and nose rings, rings and necklaces, all jewelry of gold, that is, every man who made an offering of gold to the LORD.” (Exodus 35:22 NKJV)

A merry heart does good, like medicine, But a broken spirit dries the bones. (Proverbs 17:22 NKJV)

Every since we saw Laughingthrushes for the first time at Zoo Miami’s Wing of Asia aviary, I fell in love with these birds. The photo above is the one I like to call “Joe Cool.” Their “sunglasses” makes them look rather “Cool” don’t you think? They are fun to watch and most of them like to hop around instead of walking.

The Laughingthrushes are the genus Garrulax of the large Old World babbler family of passerine birds. They occur in tropical Asia, with the greatest number of species occurring in the Himalaya and southern China.
These are rangy, medium-sized, floppy-tailed landbirds with soft fluffy plumage. These birds have strong legs and are quite terrestrial. This group is not strongly migratory, and most species have short rounded wings, and a weak flight.

A few, like the Streaked Laughingthrush occur in fairly open habitats, but most are jungle species, difficult to observe in the dense vegetation they prefer.

Like other babblers, these are noisy birds, and the characteristic laughing calls are often the best indication that these birds are present. As with other babbler species, they frequently occur in groups of up to a dozen, and the rainforest species like the Ashy-headed Laughingthrush often occur in the mixed feeding flocks typical of tropical Asian jungle. (Wikipedia)

Then our mouth was filled with laughter, And our tongue with singing. Then they said among the nations, “The LORD has done great things for them.” The LORD has done great things for us, And we are glad. Bring back our captivity, O LORD, As the streams in the South. Those who sow in tears Shall reap in joy. He who continually goes forth weeping, Bearing seed for sowing, Shall doubtless come again with rejoicing, Bringing his sheaves with him. (Psalms 126:2-6 NKJV)

Who Paints The Leaves?

I trust you enjoyed seeing the Laughingthrush – Leiothrichidae family in the Sunday Inspiration – Laughingthrush article. From my first encounter with them, they have been a delight to watch. We have only seen them in Zoos, because they live in Southeast Asia and Indian Subcontinent.

The Laughingthrushes are the genus Garrulax and Trochalopteron of the Leiothrichidae family of passerine birds. They primarily occur in tropical Asia. These are rangy, medium-sized landbirds. These birds have strong legs and are quite terrestrial. This group is not strongly migratory, and most species have short rounded wings, and a weak flight.

A few, like the Streaked Laughingthrush occur in fairly open habitats, but most are jungle species, difficult to observe in the dense vegetation they prefer.

These are noisy birds, and the characteristic laughing calls are often the best indication that these birds are present. They frequently occur in groups of up to a dozen, and the rainforest species like the Ashy-headed Laughingthrush often occur in the mixed feeding flocks typical of tropical Asian jungle.

They are small to medium sized birds. They have strong legs, and many are quite terrestrial. They typically have generalised bills, similar to those of a thrush. Most have predominantly brown plumage, with minimal difference between the sexes, but many more brightly coloured species also exist. This group is not strongly migratory, and most species have short rounded wings, and a weak flight. They live in lightly wooded or scrubland environments, ranging from swamp to near-desert. They are primarily insectivorous, although many will also take berries, and the larger species will even eat small lizards and other vertebrates. (Wikipedia)

The Sumatran Laughingthrush (Garrulax bicolor), also known as the Black-and-white Laughingthrush, is a member of the Leiothrichidae family. It is endemic to highland forest on the Indonesian island of Sumatra, The laughingthrushes are a family of mostly Old World passerine birds. They are rather diverse in size and coloration. These are birds of tropical areas, with the greatest variety in Southeast Asia and the Indian Subcontinent. The entire family was previously included in the Timaliidae.

From the Life List of All Birds We Have Seen (Not up to date), here are the family members we have seen so far. 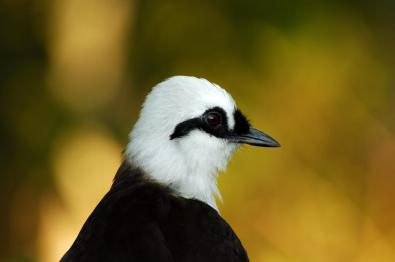 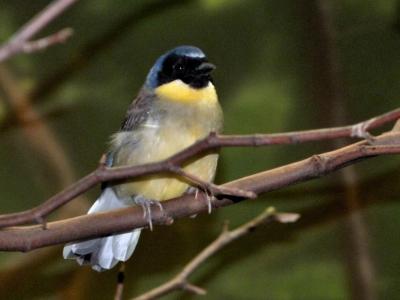 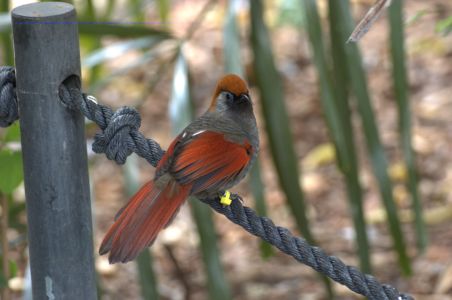 Red-tailed Laughingthrush by Dan at Wings of Asia Zoo Miami 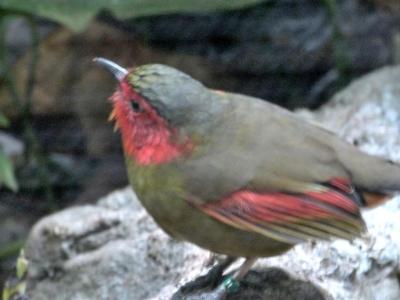 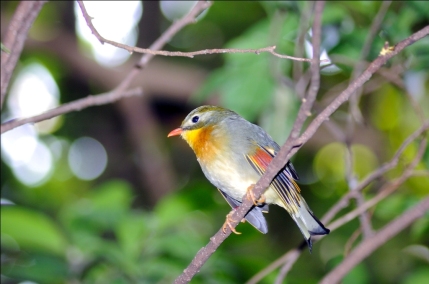 Let us hold fast the confession of our hope without wavering, for He who promised is faithful. And let us consider one another in order to stir up love and good works, not forsaking the assembling of ourselves together, as is the manner of some, but exhorting one another, and so much the more as you see the Day approaching.
(Hebrews 10:23-25 NKJV)

(Music and photos are used by permission. If copied, you must obtain permission also.)