“To the Chief Musician. Set to “Do Not Destroy.” a Michtam of David When He Fled from Saul into the Cave. Be merciful to me, O God, be merciful to me! For my soul trusts in You; And in the shadow of Your wings I will make my refuge, Until these calamities have passed by. I will cry out to God Most High, To God who performs all things for me.” (Psalms 57:1-2 NKJV)

“He shall cover you with His feathers, And under His wings you shall take refuge; His truth shall be your shield and buckler. ” (Psalms 91:4 NKJV)

Trust you enjoy this as much as I did!

Birds of the Bible – Eagles 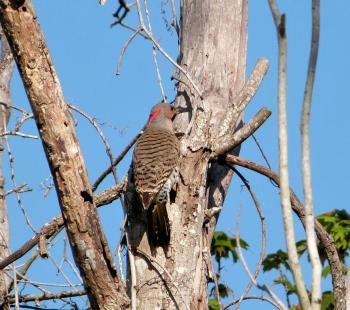 HOW A FLICKER FEEDS HER YOUNG

Based upon the observations of Mr. William Brewster.

As the house of the woodpecker has no windows and the old bird very nearly fills the doorway when she comes home, it is hard to find out just how she feeds her little ones. But one of our best naturalists has had the opportunity to observe it, and has told what he saw.

A flicker had built a nest in the trunk of a rather small dead tree which, after the eggs were hatched, was accidentally broken off just at the entrance hole. This left the whole cavity exposed to the weather; but it was too late to desert the nest, and impossible to remove the young birds to another nest.

When first visited, the five little birds were blind, naked, and helpless. They were motherless, too. Some one must have killed their pretty mother; for she never came to feed them, and the father was taking all the care of his little family. When disturbed the little birds hissed like snakes, as is the habit of the callow young of woodpeckers, chickadees, and other birds nesting habitually in holes in trees. When they were older and their eyes were open, they made a clatter much like the noise of a mowing-machine, and loud enough to be heard thirty yards away.

The father came at intervals of from twenty to sixty minutes to feed the little ones. He was very shy, and came so quietly that he would be first seen when he alighted close by with a low little laugh or a subdued but anxious call to the young. “Here I am again!” he laughed; or “Are you all right, children?” he called to them. “All right!” they would answer, clattering in concert like a two-horse mower.

As soon as they heard him scratching on the tree-trunk, up they would all clamber to the edge of the nest and hold out their gaping mouths to be fed. Each one was anxious to be fed first, because there never was enough to go round. There was always one that, like the little pig of the nursery tale, “got none.” When he came to the nest, the father would look around a moment, trying to choose the one he wanted to feed first. Did he always pick out the poor little one that had none the time before, I wonder?

After the old bird had made his choice, he would bend over the little bird and drive his long bill down the youngster’s throat as if to run it through him. Then the little bird would catch hold as tightly as he could and hang on while his father jerked him up and down for a second or a second and a half with great rapidity. What was he doing? He was pumping food from his own stomach into the little one’s. Many birds feed their young in this way. They do not hold the food in their own mouths, but swallow and perhaps partially digest it, so that it shall be fit for the tender little stomachs.

While the woodpecker was pumping in this manner his motions were much the same as when he drummed, but his tail twitched as rapidly as his head and his wings quivered. The motion seemed to shake his whole body.

In two weeks from the time when the little birds were blind, naked, helpless nestlings they became fully feathered and full grown, able to climb up to the top of the nest, from which they looked out with curiosity and interest. At any noise they would slip silently back. A day or two later they left the old nest and began their journeys.

No naturalist has been able to tell us whether other woodpeckers than the golden-winged flicker feed their young in this way; and little is known of the number of kinds of birds that use this method, but it is suspected that it is far more common than has ever been determined. If an old bird is seen to put her bill down a young one’s throat and keep it there even so short a time as a second, it is probable that she is feeding the little one by regurgitation, that is, by pumping up food from her own stomach. Any bird seen doing this should be carefully watched. It has long been known that the domestic pigeon does this, and the same has been observed a number of times of the ruby-throated hummingbird. A California lady has taken some remarkable photographs of the Anna’s hummingbird in the act, showing just how it is done.

And Jesus saith unto him, The foxes have holes, and the birds of the air have nests; but the Son of man hath not where to lay his head. (Matthew 8:20 KJV)

This is Chapter V from The Woodpeckers book. Our writer, Fannie Hardy Eckstorm, wrote this in 1901. There are 16 chapters, plus the Forward, which are about the Woodpecker Family here in America. All the chapters can be found on The Woodpeckers page. I added photos to help enhance the article. In 1901, photography was not like today.

The Northern Flicker (Colaptes auratus) is a medium-sized member of the woodpecker family. It is native to most of North America, parts of Central America, Cuba, the Cayman Islands, and is one of the few woodpecker species that migrate. There are over 100 common names for the Northern Flicker. Among them are: Yellowhammer, clape, gaffer woodpecker, harry-wicket, heigh-ho, wake-up, walk-up, wick-up, yarrup, and gawker bird. Many of these names are attempts at imitating some of its calls.

Check out their sounds at Northern Flicker – All About Birds

Their breeding habitat consists of forested areas across North America and as far south as Central America. They are cavity nesters who typically nest in trees but they will also use posts and birdhouses if sized and situated appropriately. They prefer to excavate their own home although they will reuse and repair damaged or abandoned nests. Abandoned Flicker nests create habitat for other cavity nesters. Flickers are sometimes driven from nesting sites by another cavity nester, European starlings.

A typical clutch consists of 6 to 8 eggs whose shells are pure white with a smooth surface and high gloss. The eggs are the second largest of the North American woodpecker species, exceeded only by the Pileated Woodpecker’s. Incubation is by both sexes for approximately 11 to 12 days. The young are fed by regurgitation and fledge about 25 to 28 days after hatching. (Wikipedia)

The Woodpeckers by Fannie Hardy Eckstorm

Other Flickers around the World: 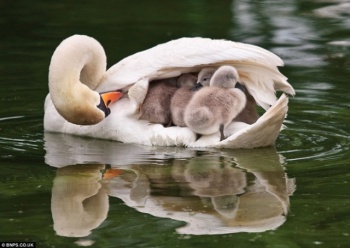 Yesterday’s My Mom And Me – Email blog inspired me to write a new article for the Birds of the Bible For Kids. It is called:”

Please check it out. It is geared for a younger audience.

My Mom and Us

Yesterday, in My Mom and Me – Photos, you saw many photos of Mother Animals and Mother Birds with their young ones. Does the Bible mention mother birds and their young or eggs. Yes, it does.

“If a bird’s nest happens to be before you along the way, in any tree or on the ground, with young ones or eggs, with the mother sitting on the young or on the eggs, you shall not take the mother with the young;

you shall surely let the mother go, and take the young for yourself, that it may be well with you and that you may prolong your days. (Deuteronomy 22:6-7 NKJV)

That is very interesting verse. It tells us not to take both the mother and the young or eggs. Do you know why? Look at the last verse; it says “may be well with you and you will prolong your days (live longer). Do you know another reason not to take both? The Lord commanded the animals and birds to have babies and fill the earth. If you kill them both, then none of that family will be able to have more baby birds or the young will not get to grow up and have baby birds. Soon, there wouldn’t be any more of those kinds of birds and they would become “extinct.”

The Lord told us from the very beginning of the Bible to have “dominion” over the birds and animals. That does not mean to be mean to them, but more like to watch over them and care for them. That is what our verse above is telling us. Not to destroy all of them, but to leave some of the family alive to carry on.

Gather the people–men, women, children, and foreigners living within your gates–so that they may listen and learn to fear the LORD your God and be careful to follow all the words of this law. (Deuteronomy 31:12 HCSB)