Birdwatching and Blessings – Anoles and Geckos

Most mornings while we are eating and watching out our back door, we not only see the various birds, but, being in Florida, there are always Anoles around. Many call the green anoles Chameleons, but our brown one are just Anoles. I have been trying to get a good photo of them showing their dewlap, which is a fold of skin. But this video does a better job.

While reading our devotional of Zechariah 8 this morning, the Gecko was mentioned. The anoles and geckos both have this characteristic.

“Geckos have some of the stickiest feet in nature. They can hang their entire body weight off one toe, and climb up nearly any wall, no matter how slick or polished.

Biologists and engineers looking to duplicate the gecko’s abilities in synthetic glues have recently uncovered its secret. It uses million of tiny foot hair ends to adhere to surfaces through weak molecular attractive forces. Each foot hair ends in about a thousand even tinier pads at its tip. These pads are arranged in precise geometric sizes and shapes and determine the level of stickiness. The total adhesive power of an average gecko would support 280 pounds!”

“As sticky as geckos’ feet are, Gods faithfulness is even “stickier.” He never lets us go, and His promises endure forever…..” (From Today in the Word, 2003)

What does God have in common with an object in the car mirror? Both are closer than they appear.

Spring forward with the Lord so you won’t fall back into sin.

We are each a masterpiece, a piece of the master.

“A man that hath friends must shew himself friendly: and there is a friend that sticketh closer than a brother.”
(Proverbs 18:24 KJV)
“Thy faithfulness is unto all generations: thou hast established the earth, and it abideth.” (Psalms 119:90 KJV)

Here is another interesting video from Creation Moments about the habit of Bee-eaters of eating bees loaded with poison.

Watch our video about
one of God’s most amazing
creatures – birds that eat bees!

Bee-eaters make their living catching and eating bees and wasps with stingers. The poison in many of these stinging insects is powerful enough to kill bee-eaters, but the birds are not only skilled at avoiding stings, they know how to remove the poison from the bee when they eat it! And they have one other important skill, which you’ll learn about when you watch our “Birds Who Build Pyramids” video.

via ‘Sarge, Will You Tell Us About God?’ – The Story of God’s Miraculous Protection of an Entire U. S. Marine Unit

From my friend at “A Walk In The Word”

Woodstock is not the only bird to live in a nest complex. Birds in this area, central Florida, have at least one bird, the Monk Parakeet, or Quaker Parakeet that makes an “apartment” nest.

We used to own two Monk Parakeets, so I was familiar with them when we moved here. In South Florida, where we lived in the past, they were wild there also. In fact, Bandi, our first Monk parakeet had been shot out of the tree next door by teenagers. Some neighbor kids brought her to me and long story short, her wing had to be amputated. So, she never went back to the wild.

Hoppy in front, Bandi in back – Monk Parakeet (Myiopsitta monachus)

Hoppy, our second one, had a broken leg, which our vet fixed up. That is the bandage on his leg. Back to the High-rise.

The Sociable Weaver (Philetairus socius) is a great example of building a “Highrise.” [from 16 Most Amazing Bird Nest ]

Weaverbirds Nests are Like Huts has a great photo of an elaborate “homestead.” Also, it is a very interesting article about how they make the nest.

Then again, maybe Woodstock would like to visit the Montezuma Orpendola and select one of the higher nest apartments.

There are many more examples of how the Lord, in His Wisdom, has given the birds the knowledge to build these nest and also, to know that “community” can aid in their protection.

The book of Ecclesiastes has great words of wisdom from Solomon when he refers to one person, versus two or more:

“There is one alone, without companion: He has neither son nor brother. Yet there is no end to all his labors, Nor is his eye satisfied with riches. But he never asks, “For whom do I toil and deprive myself of good?” This also is vanity and a grave misfortune. Two are better than one, Because they have a good reward for their labor. For if they fall, one will lift up his companion. But woe to him who is alone when he falls, For he has no one to help him up. Again, if two lie down together, they will keep warm; But how can one be warm alone? Though one may be overpowered by another, two can withstand him. And a threefold cord is not quickly broken.” (Ecclesiastes 4:8-12 NKJV)

THEY GATHER THEMSELVES TOGETHER

“The sun ariseth, they gather themselves together, and lay them down in their dens.  Psalm 104:22

“A righteous man regardeth the life of his beast: but the tender mercies of the wicked are cruel.” (Proverbs 12:10 KJV)

“Thy righteousness is like the great mountains; thy judgments are a great deep: O LORD, thou preservest man and beast.” (Psalms 36:6 KJV)

I was checking around the state to see what was being done to prepare for the Hurricane. Now, almost two months later, how did the Zoos do during and after the storm. We were discussing maybe visiting one of the zoos in a month or so, and I was wondering how much damage they received. Actually, one of our favorite birding places here in Lakeland, the Circle B Bar Reserve, just re-opened today, October 13, 2017. They had numerous downed trees and flooding.

While checking out my most favorite birding place at a Zoo, Zoo Miami, they are actually opening back up tomorrow, October 14th for the first time since Hurricane Irma.

Here are some articles and video that you might find informative as to how they did and how they protected their animals.

Zoo Miami to Open Oct. 14, after Hurricane Irma
In the article, you will see a photo like this. Click it and the photos will open. Click through them to see some of the damage. 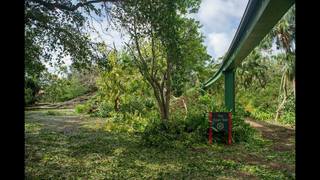 Go to Google and search: “Zoo Miami irma” and you will find many photos of the protected animals and damage around the Zoo. Most of these are Copyrighted and can not be shared here.

“The east wind carrieth him away, and he departeth: and as a storm hurleth him out of his place.” (Job 27:21 KJV)

“But the men marvelled, saying, What manner of man is this, that even the winds and the sea obey him!” (Matthew 8:27 KJV)

While working on the last Attributes and Avian article, – Bounty/Bountiful, I was using the “B – First Name of Birds” list to find a bird to use. The Barbuda Warbler (Setophaga subita) caught my attention. Also, one of our readers wrote a comment, wondering what happened to the birds during a hurricane.

The tiny island of Barbuda took a direct hit by Hurricane Irma and basically destroyed at least 95% of all structures. They have now evacuated all residents off of the island. [inhabited for the last 300 years] (BoingBoing article Not One Single Human Left on the Island) “With 95% of the island’s structures completely destroyed, all 1,800 residents have evacuated to nearby Antigua, and now live in shelters or with relatives. The only living creatures left on Barbuda are pets and livestock, which the non-profit group World Animal Protection are trying to feed and rescue.” So, what about the birds?

The Barbuda Warbler is endemic to Barbuda. “In addition to the catastrophic impact on Barbuda’s human residents, concern turned to the storm’s effects on the island’s wildlife. The island’s only endemic bird, the near-threatened Barbuda warbler, numbered less than 2,000 individuals prior to the hurricane. It is unknown if the warbler survived the hurricane or its aftermath. Barbuda’s Codrington Lagoon, home to the largest colony of magnificent frigatebirds in the Caribbean, with an estimated 2,500 nesting pairs, was also inundated by the storm surge.” From Hurricane Irma article on Wikipedia. Also, from Wikipedia, “The Barbuda warbler (Setophaga subita) is a species of bird in the Parulidae family. It is endemic to the island of Barbuda in Antigua and Barbuda. Its natural habitat is tropical dry shrubland near wetland areas. It is threatened by habitat loss. It once was considered a subspecies of the Adelaide’s Warbler.”

Searching the internet, I couldn’t find out too much about the Barbuda Warbler, but here are a few articles about other bird species that you will find interesting.

“Irma left the island of Barbuda in ruins; about 95 percent of structures were destroyed or damaged, and nearly all residents were evacuated last week as Hurricane Jose threatened to hit. The fate of Barbuda Warbler, an endemic species that likely numbered less than 2,000 birds before Irma, is unknown.

Jeremy Ross, a scientist with the University of Oklahoma, wonders if Irma was an extinction-level event for the warbler.

Barbuda’s Codrington Lagoon, a RAMSAR-designated wetland and national park, was home to the largest colony of Magnificent Frigatebirds in the region (around 2,500 pairs). According to BirdsCaribbean, the lagoon “was breached during the storm and the sea has flowed in.”

“Thousands of birds must have perished,” said Andrew Dobson, president of BirdsCaribbean, in an article posted on Bernews.com.

One article I wish I hadn’t found, tells about the destruction of so many Flamingo. Translated as “Hundreds of flamingos killed in Cayo Coco by Hurricane Irma”

” And I say unto you my friends, Be not afraid of them that kill the body, and after that have no more that they can do. But I will forewarn you whom ye shall fear: Fear him, which after he hath killed hath power to cast into hell; yea, I say unto you, Fear him. Are not five sparrows sold for two farthings, and not one of them is forgotten before God? But even the very hairs of your head are all numbered. Fear not therefore: ye are of more value than many sparrows.” (Luke 12:4-7 KJV)

ARE NOT FIVE SPARROWS SOLD

“”Are not five sparrows sold for two copper coins? And not one of them is forgotten before God.
(Luke 12:6 NKJV)

“Are not two sparrows sold for a copper coin? And not one of them falls to the ground apart from your Father’s will.” (Matthew 10:29 NKJV)

JUST SHALL COME OUT OF TROUBLE

“The wicked is snared by the transgression of his lips: but the just shall come out of trouble.” (Proverbs 12:13 KJV)

YEA, THOU LIFTEST ME UP

“He delivereth me from mine enemies: yea, thou liftest me up above those that rise up against me: thou hast delivered me from the violent man.” (Psalms 18:48 KJV)